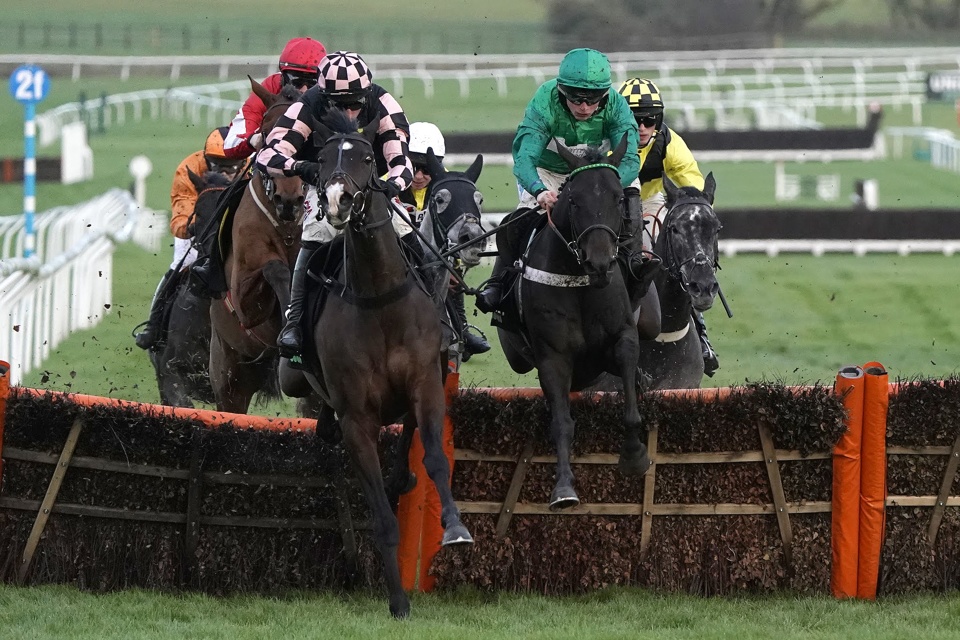 You can check out our International Hurdle tips here nearer the off...

What is the International Hurdle?

What happened in the 2020 International Hurdle?

Song For Someone edged out Silver Streak in a thrilling finish to the International Hurdle, as the pair enhanced their Champion Hurdle claims with their fine performances. The name on everyone's lips before the off was Goshen, who was heavily backed in the morning, but he failed to fire, trailing in last. However, the race still produced a thrilling finish with the Tom Symonds-trained Song For Someone outbattling Silver Streak, while Ballyandy finished third.

A brilliant effort from the grey Silver Streak in second!

#AD New customers only. Place your FIRST bet on any sportsbook market and if it loses we will refund your stake in CASH. Max refund for this offer is €/£20. T&Cs apply. 18+ begambleaware.org
get offer
Bet £10 Get £40 in Free Bets
#AD 18+. Play Safe. New customers using promo code M40 only. 1x per customer. Min £/€10 bet. Min odds 1/2 (1.5). Free bets of 2 x £/€15 issued after first qualifying bet settles. Max £/€10 Bonus. 35x wagering requirement. Max redeemable bonus: £25. Casino bonus expires after 72 hours. UK & Eire only. Additional T&Cs, including free-bet, game, location, payment method and stake contributions apply. begambleaware.org.
Welcome Offer
#AD Open Account Offer. Up to £100 in Bet Credits for new customers at bet365. Min deposit £5. Bet Credits available for use upon settlement of bets to value of qualifying deposit. Min odds, bet and payment method exclusions apply. Returns exclude Bet Credits stake. Time limits and T&Cs apply. The bonus code ‘100BET365’ can be used during registration, but does not change the offer amount in any way. 18+ begambleaware.org.
Bet £10 Get £30 Free Bets + £10 Casino Bonus
#AD Minimum deposit of £10 using deposit code 30F - A qualifying bet is a ‘real money’ stake of at least £10 placed on any sports market - Minimum odds of 1/2 (1.5) - Free bets credited upon qualifying bet settlement and expire after 7 days - Free bet stakes not included in returns - Casino Bonus must be claimed within 7 days • To withdraw bonus/related wins, wager bonus amount x40 within 14 days • Wagering req. vary by game • Withdrawal restrictions and Full T&C’s apply. 18+ begambleaware.org
Bet £10 Get £30 + 60 Free Spins
#AD New UK & NI customers only. Promo code SPORTS60. Deposit and place first sports bet of £10+ in one transaction, at odds of Evens (2.0)+, settled within 60 days. First bet must be on Sports. £30 in Free Bets credited within 48 hours of bet settlement. 7-day expiry. Payment restrictions apply. SMS validation may be required. Max 60 Free Spins on Justice League Comics. 7-day expiry.  Full T&Cs apply. 18+ begambleaware.org
Up To £100 In Free Bets
New customer offer. Place 5 x €/£10 or more bets to receive €/£20 in free bets. Repeat up to 5 times to receive maximum €/£100 bonus. Min odds 1/2 (1.5). Exchange bets excluded. T&C's apply, 18+ begambleaware.org
Bet £10 Get £40 In Bonuses
#AD 18+ new customers only. Deposit, opt-in and place a £10 qualifying bet at odds of 2.00 or greater within 7 days of opening a new account; excludes cashed out bets. Receive 3x £10 Sports Free Bets, valid on set events only at odds 2.00 or greater. Plus, a £10 Game Show Bonus, selected games, wager 40x to withdraw a max of £250. Bonuses expire in 7 days. T&Cs Apply, see below. Please Gamble Responsibly. 18+ begambleaware.org
Bet £10 Get £20 In Free Bets
#AD Min stake £10. Min odds 1/2 (1.5). First bet only. Free bets expire in 7 days. Cashed out bets won’t apply. Payment method restrictions. Online UK customers only. 30 days to qualify for £20 in Free Bets. 18+. T&Cs apply
Money back As A Bonus Up To £40 If Your First Racing Bet Loses + £10 Casino
New customers only. 18+, BeGambleAware.org. Min deposit £10. Money back as bonus. Wagering requirements: Racing 3x at min. odds of 1.40 (2/5), Casino 35x. Only one bonus can be used at a time, Racing bonus must be wagered before using the Casino, unless the bonus has been forfeited. Bonus will expire after 7 days of opt-in. #ad
Bet £10 Get £5 Or 50% Losses Back Up To £25
To activate your Sportsbook 50% Back Welcome Offer, simply deposit and bet on any Sportsbook markets of your choice at odds of evens (2.00) or greater. If your account has Sportsbook losses at the end of your first day's betting (23:59), we'll refund 50% of your first day's losses as a Free Bet up to £25 (Minimum 3 bets required). If your account is up, you're guaranteed a £5 Free Bet provided you place at least 1 bet of £10 or greater at minimum odds evens or greater. T&Cs apply. 18+ begambleaware.org
Advert Disclaimer
Horseracing.net is a free online resource which endeavour to provide helpful and useful content and odds comparison to its visitors. Please be advised that Horseracing.net accepts affiliate commission from the companies appearing on the site, and agreed commission levels impact the location and order in which the companies (and/or their products) are presented on the website. Any ratings that appear on this site is determined by our subjective opinion of the brand but also based on market share and reputation, each brand's conversion rates, commission paid to us and general consumer interest. Company listings on this page don't imply our endorsement. We do not feature all providers on the market. Except as expressly set forth in our terms and conditions, all statements and warranties regarding the information presented on this page are disclaimed. The information, including odds, which appear on this site is subject to change at any time.
Today's Most tipped
Highland Rocker
Ripon 14:50
4/9
13 Tips Bet Now
Oxted
Newmarket 15:00
8/11
13 Tips Bet Now
Maytal
Newcastle 17:25
1/1
12 Tips Bet Now
Royal Advice
Newcastle 19:55
8/11
11 Tips Bet Now
Latest racing results
Ripon
14:15
Full Result
1st Khunan
100/30
2nd Mytilda
3/1 F
3rd Flaming Rib
9/2
Cheltenham
14:05
Full Result
1st Her Indoors
6/1
2nd Scholastic
9/4 F
3rd Raffles Gitane
40/1
Limerick
13:55
Full Result
1st Clever Currency
17/2
2nd Buzz Light
10/1
3rd Raamez
9/1
View All Today's Results