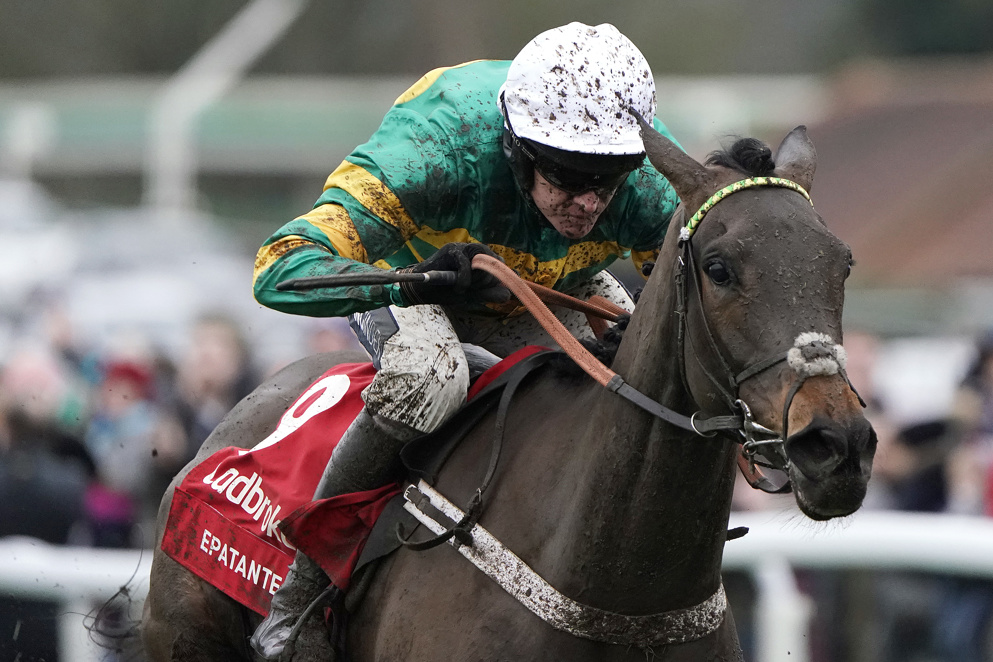 Epatante is favourite for the Champion Hurdle.

Steve Chambers previews the 2020 Champion Hurdle, which is the feature race on the opening day of the Cheltenham Festival, and will see 17 horses bid for glory in the Grade 1 showpiece...

Nicky Henderson has saddled the winner of the Champion Hurdle seven times during his illustrious career, and the Seven Barrows maestro will look to make it eight on Tuesday afternoon at 15:30, as he saddles the fancied duo of Epatante and Pentland Hills in a wide open renewal.

The former was last seen cruising to victory in the Christmas Hurdle at Kempton Park on Boxing Day, and being the sole mare in the field, the six-year-old will benefit from a notable 7 lb sex  allowance. She has won four of her five starts over hurdles to date, but it's worth noting that she disappointed on her last visit to the Cheltenham Festival, when only able to finish ninth in last year's Mares' Novices' Hurdle. So, while she has the strongest piece of form heading into the Champion Hurdle, she has a cloud hanging over her head as to whether she can deliver the goods at Prestbury Park.

On the contrary, her stablemate Pentland Hills was a sensational winner of the Triumph Hurdle at the 2019 Festival, but the five-year-old has failed to kick on this season, suffering a brace of defeats from his two starts this campaign. Fifth in the International Hurdle at Cheltenham, Pentland Hills was then edged into second place by fellow Champion Hurdle hopeful Ballyandy in a key trial at Haydock Park, but a return to GL50 should see him reverse that form and he will go close.

The impressive Epatante flies home to take the Ladbrokes Christmas Hurdle at @kemptonparkrace!

Willie Mullins is another heading into the race with an exciting two-pronged attack, and a fascinating runner for the Closutton handler is Cilaos Emery. Having sparkled over fences at the start of the season, the eight-year-old suffered a crashing fall at the Dublin Racing Festival, which forced Mullins to switch him back to hurdles. A facile win in the Red Mills Trial Hurdle saw him return to winning ways, and it was an impressive enough victory to persuade his connections to supplement him for the Champion Hurdle. In an open renewal, he is a lively player.

However, it's the Mullins second string in the betting that catches the eye, as Sharjah - who has some notable wins on his CV - has to be thereabouts if producing his best on Tuesday. A Grade 1 winner at Leopardstown earlier in the season, when he defeated Petit Mouchoir with aplomb, the seven-year-old failed to land a blow on Mares' Hurdle hope Honeysuckle in the Irish equivalent of this last month, but he can bounce back here. Brought down in last year's Champion Hurdle, Sharjah is a smooth traveller who can benefit from a big field, and can duly work his way to the front in the closing stages and claim victory.

Heading to his sixth Cheltenham Festival, Supasundae is the sole ten-year-old lining up on Tuesday, but while the Jessica Harrington-trained veteran may not be the force of old, he can still perform to a high enough level to be a key player in a Champion Hurdle that is devoid of real quality. Fourth in the Irish Champion Hurdle last time out, Supasundae will be doing all his best work late on and could well pick up the pieces in the closing stages to land a place.

It's back to back wins in the Matheson Hurdle for Sharjah and trainer @WillieMullinsNH https://t.co/nEJxlmWzOv

A string of four wins on the bounce has launched Gavin Cromwell's Darver Star into the Champion Hurdle reckoning, and he put up a fine effort when second in the Irish Champion Hurdle last time out. Potentially still on the upgrade, the eight-year-old can't be completely discounted and heads to the Cheltenham Festival at the top of his game.

Of the others, the five-year-old Fusil Raffles will be the third shot fired by the Henderson gun, and the lightly-raced youngster has lots of ability. However, he was pulled up in the Christmas Hurdle and can't be trusted and his stablemate Call Me Lord would be the more interesting of the two, as he won the International Hurdle earlier in the season at Cheltenham and will relish a return to the Gloucestershire venue.

Petit Mouchoir and Ballyandy both have significant experience at Cheltenham, but that pairing may just lack the class needed to claim victory in a race that can go the way of Sharjah, who can etch his name alongside some of the hurdling greats.