You are using an outdated browser. Please upgrade your browser to improve your experience.
This website uses cookies
Cookies help us and our partners provide statistics. By browsing this website, you consent to the use of cookies in accordance with our Cookies Policy.
Accept & Close
Cheltenham Festival Day 1
Select Race
Free Bets Betting Offers Lucky 15 Tips Today's Racing Naps 2023 Cheltenham Festival
By Raceolly 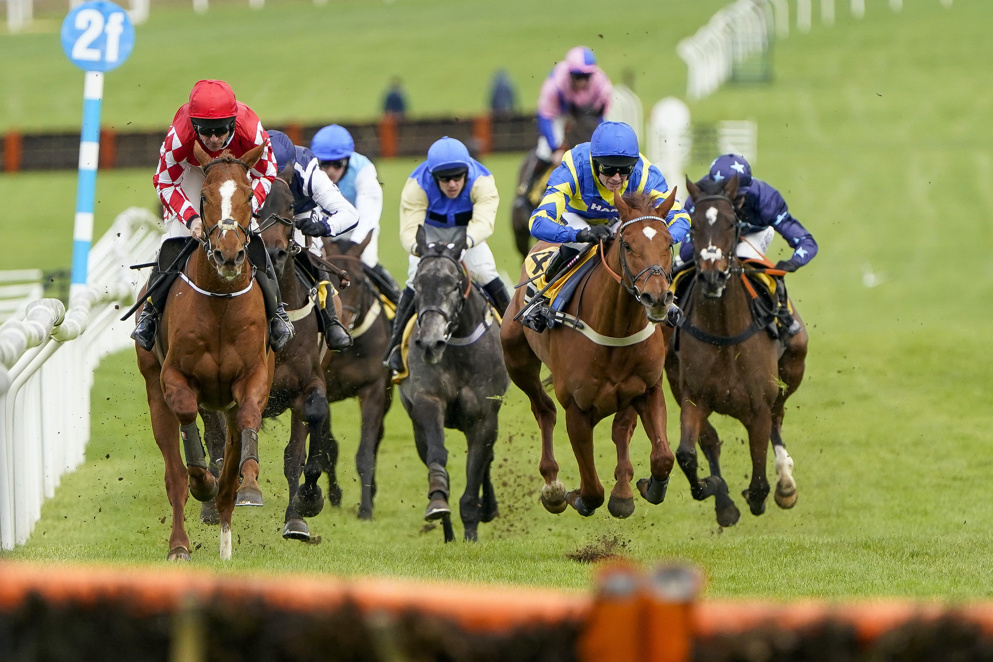 Our resident tipster RaceOlly is already counting down the days until the start of the 2023 Cheltenham Festival, and the man who bagged a 100/1 winner earlier this month, has delved through the ante-post markets and picked out four big-priced selections for the March showpiece. Focusing on the four Championship races, he's picked out ante-post selections in the Champion Hurdle, Queen Mother Champion Chase, Stayers' Hurdle and Cheltenham Gold Cup...

The Champion Hurdle is all about Constitution Hill and the market reflects that, but the strong favourite opens up plenty of options for each way plays on the ante post market with three places up for grabs. This race could easily cut up to two places on the day and you can easily cut a fair few in the market out.

From the likely runners State Man (9/2) and Vauban (9/1) are a great place to start following their duel over the Christmas period. State Man came out on top that day but Vauban caught the eye and will come on for that run which at the current prices makes him more appealing, but there’s one at a huge price that has close form ties with Vauban and that’s PIED PIPER (66/1).

Gordon Elliott's five-year-old beat Vauban on his hurdles debut at Punchestown before very easily winning a Grade 2 at Cheltenham, although the opposition were not up to much that day. He then went to the Triumph Hurdle for a rematch with Vauban and was the only held up performer to penetrate the top six when finishing upside the second Fil Dor. The Cullentra House inmate then went to Aintree following that and dead heated in a Grade 1 and got revenge on that rival (Knight Salute) on seasonal debut at this track following that.

He had excuses last time at Leopardstown in the earlier mentioned State Man and Vauban race when he returned clinically abnormal and this two-time course winner with placed form at a previous festival is being hugely overlooked on that run where he clearly has excuses. He's likely to be Elliott’s only Champion Hurdle runner with a returning Davy Russell taking the ride. He does hold an entry in the Irish Champion Hurdle in early February and a good performance there will see the odds collapse.

Another race that could potentially cut up a fair bit is the Queen Mother Champion Chase and another currently boasting a hot odds-on favourite. Of the ones likely to run and hold a chance of competing for those places at least are both NUBE NEGRA (33/1) and Greaneteen (20/1) catch the eye.

Both finished right in the mix in the 2021 renewal with Nube Negra arguably an unlucky loser in a close 2nd after a mistake at the last cost him dearly. With course form figures of 238211 he’s certainly a very appealing each-way option and ticks a lot of the trends boxes being a Grade 1 winner with course form and aged between 7-9. Dan Skelton's runner will likely go off within the first 5/6 in the market come the day also especially if the ground is decent. He had excuses last time at Kempton when well beaten by Edwardstone after a quicker turnaround then usual, but won that race en route to his narrow 2021 defeat and will go in to Cheltenham fresh to see him at his best. An interesting stat about the favourite in this race is 10 of the last 14 favourites were sent off odds on and only three have won, usually a race to take on the hot fave.

33/1
Double the odds, any sport, any bet, any odds!
get offer
get offer

This race is very much the opposite of the above two with it being wide open and a likely bigger field. There’s been plenty of buzz about Blazing Khal in the build up to this, but reports from the yard say he’s 50/50 to even make the festival and at mostly single figure prices it’s not one to get stuck in to at this stage, although I feel he would be the most exciting on paper

It's very interesting that Paul Nicholls has declared GELINO BELLO (33/1) in this who ties in with the Blazing Khal form closely. Nicholls has previous for chasers on the back of falls going back hurdling and winning this (see Big Buck's) and although he also holds the usual novice chase entries it’s interesting they’ve kept this on the table. He finished 2nd to Blazing Khal in both his previous runs at the track and won a Grade 1 at Aintree over three miles to round off last season. The xext step will be key for him, if it’s another novice chase then there will be scrutiny on the jumping on the back of that fall and a jumping technique that saw him going to his right through out both wins before that.

Anything less than a good performance could see him take up this engagement and the 33/1 would be long gone. I’d like to end giving the ever green Paisley Park a mention too who arguably boasts the strongest form to date at a decent price.

The Cheltenham Gold Cup is probably the trickiest of the four Championship races this time around and a race you can pick holes in most of the runners. At a huge price there’s one you wouldn’t be keen on judged on this season's efforts, but AHOY SENOR improved a bundle for the spring festivals for the previous two years and if turning up at his best he’s no where near a 66/1 shot.

Lucinda Russell's stable star finished in front of a bundle of the fancied runners last season and looked like the Gold Cup would suit him down to the ground when a staying on 2nd in the RSA last season behind L’Homme Presse, a horse he took his revenge on at Aintree soon after. He had excuses running very freely on first two runs of the season and probably wasn’t suited by the demands of a King George, but the Gold Cup will be perfect and a possible easy lead in this brings more appeal. He also ticks a lot of trends, eight-year-olds have won seven of the last 10, rated above 160, Grade 1 winner with course form, in a race that’s proper wide open.