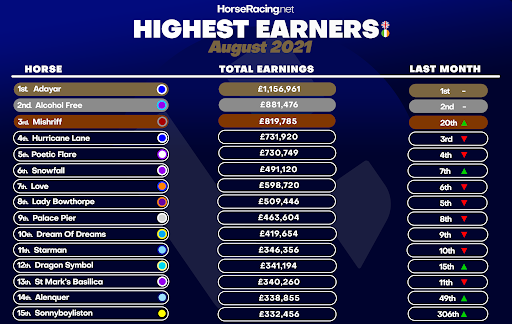 Mishriff blitzed to an emphatic win in the Juddmonte International at York last month.

A sensational month of Flat racing took place during August, with some epic performances lighting up the racecourse, and there were some notable movers in the prize money standings as we storm into September. We are heading to an almighty crescendo in the coming weeks with the likes of British Champions Day, the St Leger and the Prix de l'Arc de Triomphe all set to serve up thrilling events, but we focus on the action on UK and Irish shores, and do our monthly round-up of the latest prize money standings.

Derby and King George hero Adayar remains top of the tree despite not setting foot on the track last month and his prize chest of £1,156,961 is sure to be tough to catch. Second place in the standings at the end of July, Alcohol Free did line up in August, as she took her chance in the Juddmonte International at York's Ebor Festival, but she failed to make any inroads in Adayar's lead. Only managing to finish eighth of nine in that valuable event, Alcohol Free stuttered her prize money forward to £881,476, so she's still a hefty sum behind the Godolphin-owned pace-setter.

The star of the show in the aforementioned Juddmonte was the John & Thady Gosden-trained Mishriff, who produced one of the performances of the entire season as he romped to an emphatic six-length success in the Group 1 showpiece on the Knavesmire. With the prize fund soaring past half-a-million for the winner that day at York, Mishriff propelled up the money standings and now sits in third place with a whopping prize money amount of £819,785. With the Champion Stakes possibly on the agenda for that four-year-old at Ascot at the end of the season, could he be a possible leader come the end of the Flat season?

Hurricane Lane slipped off the podium following Mishriff's win and he dropped into fourth spot having not run in August, while Poetic Flare completes the top five having not taken to the track in the UK or Ireland in August. Jim Bolger's star was seen taking on Poetic Flare (ninth) in the Prix Jacques Le Marois in France, with the latter of that duo just prevailing, but French races don't count to these standings, so that pair were unable to boost their winnings for the season.

The star three-year-old filly of the 2021 campaign has been undoubtedly Snowfall, who made it four wins out of four in August, as she romped to a four-length victory in the Group 1 Yorkshire Oaks. Aidan O'Brien's starlet has leapfrogged her stablemate Love (£598,720) into sixth spot and has amassed the cool sum of £696,948.

The sprint trio of Dream Of Dreams (10th), Starman (11th) and Dragon Symbol (12th) have all excelled this campaign and the middle of that triumvirate Starman could soar up the rankings this weekend if he can claim glory in the Group 1 Sprint Cup at Haydock Park, so he could be a notable mover in next month's review.

While at the bottom of the table in the top-15 there are a couple of new faces with Juddmonte International runner-up Alenquer moving up to 14th following his fine second placed finish behind Mishriff. That race's valuable prize money has launched the William Haggas-trained raider up to a money total of £338,855, while bottom of the top-15 is the Ebor handicap hero Sonnyboyliston.

Johnny Murtagh's progressive staying handicapper had previously finished sixth behind Hukum in the Silver Cup at York, but a return to that venue last month for the Ebor saw him edge out Quickthorn in a thrilling finish, and the first place prize money of £300,000 has seen Sonnyboyliston's tally rise to £332,456.

There's all to play for over the remaining weeks of the season with Adayar heading the standings heading into September, but with an array of valuable prizes on offer in the final few weeks then we could see a new name at the top of the tree come the end of the Flat season in October.

Mishriff storms home to win the Juddmonte International Stakes by a massive margin! 🏆