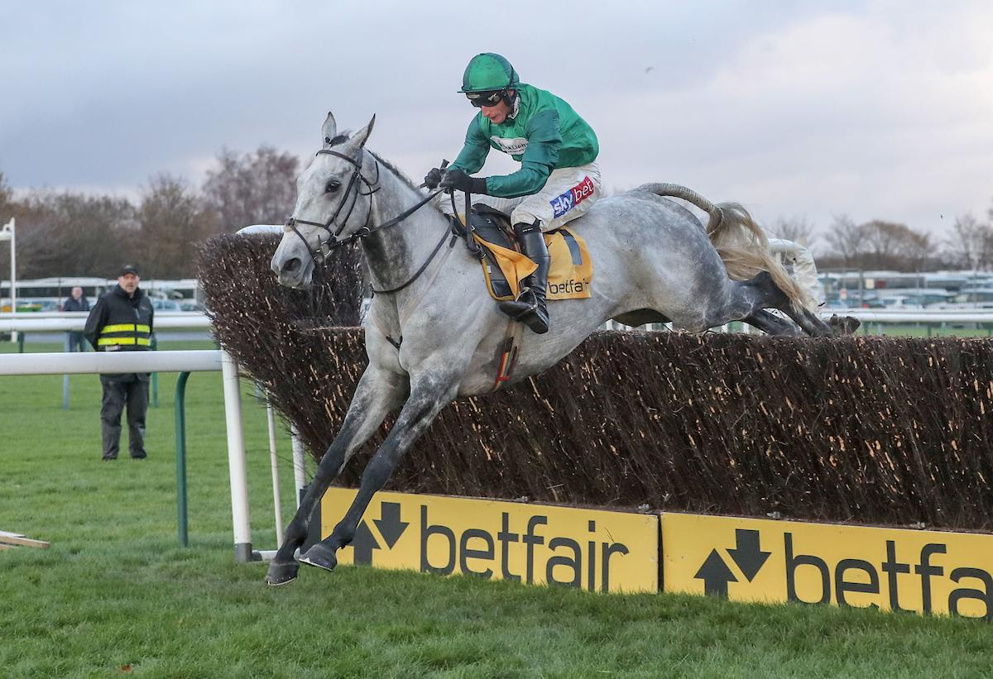 Fresh from tipping up West Cork (11/1) in last weekend's Greatwood Handicap Hurdle, Billy Grimshaw is back to pick out his best bets from Haydock Park's top quality National Hunt card, as he looks to continue his excellent tipping form...

This race has replaced the iconic Fixed Brush Hurdle in recent times and with that change it has become more akin to stereotypical hurdling races.

A trainer who in recent times has given the British handicapper sleepless nights is Emmet Mullins, and he is responsible for the favourite at the time of writing in Rightplacerightime. This gelding has trodden an eerily similar path to stable star The Shunter upon his arrival at the yard and connections will be hoping for similar success this season.

Rightplacerightime was picked up by the Mullins team from a smaller trainer, and judging by the confidence he has been backed with in the market on his three starts for his new team they seem to believe he is as well handicapped as The Shunter was upon his arrival. Rightplacerightime looked to seriously relish the step up in trip last time out at Fairyhouse and with this race being over the same distance and the horse being one of the bottom weights, his chances must be hugely respected.

However, at a bigger price the appeal of BASS ROCK is too tempting to ignore. The Sandy Thomson horse is the youngest runner in the field and five-year-olds have a tremendous record in the race in the past decade, scooping the pot five times. Bass Rock’s performance in victory at Carlisle last month indicated the step up to three miles will be one he relishes as he was doing his best work at the finish. With hot jockey Ryan Mania riding better than he ever has now, Bass Rock is primed to go close.

Already a bona fide Haydock legend, BRISTOL DE MAI makes his seasonal reappearance at the course that has made him famous on Saturday in the Betfair Chase. Nigel Twiston-Davies has taken a few years to fully understand the bold front-running grey but has always known he is a top-class chaser around here in November. As he enters his eighth season jumping in Britain, the popular gelding will undoubtedly have to be at his very best to see off younger pretenders to his crown such as Next Destination for Paul Nicholls and Henry De Bromhead’s Cheltenham Gold Cup second A Plus Tard.

With his record of no wins post-February confirming him as an early season horse, this afternoon on Merseyside is Bristol De Man’s big day every season. His handler will undoubtedly have him primed to run at his very best, something which cannot be certain regarding his rivals who may have bigger fish to fry later in the season. The concerns of some over his need for bottomless ground are misplaced, with his win in this race in 2018 coming on good ground and a creditable 3rd in that seasons’ Cheltenham Gold Cup on good to soft testament to his versatility regarding the surface under-hoof.  He is worth backing at a general 7/2.

Regarding the favourite A Plus Tard, were this to be confirmed as his main target for the season it would be hard to back against the seven-year-old. However, with his poor record fresh (beaten favourite on all three reappearances) and the worry that he is using this race as a stepping stone, he can be discounted at the current price of 11/8. Of the rest of the six runners, it is Next Destination who is rated as the biggest danger to the selection after a promising novice chase campaign last season and bullish updates from his trainer in recent days

Hopefully another super Saturday is in store for Ryan Mania as he bids to follow up his successes from last weekend with a double completed by the selection for this contest, EMPIRE STEEL. Making his seasonal reappearance after a 226-day break, Sandy Thomson’s seven-year-old has some impressive form in the book and with another year of growth and experience behind him can make his mark in staying handicap chases like this one throughout the campaign.

He was last seen in a sizzling hot race at Aintree, when he found the pace too much in a race eventually won by Cheltenham Gold Cup contender Chantry House. Empire Steel is not in the same class as the winner that day, but the fact Sandy Thomson was willing to chance him in such a prestigious contest bodes well for the trainer’s opinion of his runner. Before that he romped to a stunning 41-length success over the Skelton team’s Protektorat, who last weekend was an unlucky loser in the Paddy Power Gold Cup. It is debatable whether the Skelton runner ran to his full potential that day, but nevertheless the performance from Empire Steel warrants serious respect.

Of his rivals in this race, Ramses De Teillee seems to have lost his way a touch and is carrying top weight, while short priced favourite at the time of writing Strictlyadancer has been on a fair winning streak but in amateur riders’ races and the form of such contests is questionable. He is the main danger to Empire Steel, especially with such a featherweight to carry, but Empire Steel’s form stacks up more positively and is worth backing at current odds of 6/1.