Irish Arkle Tips: Cash the one to Back at Leopardstown 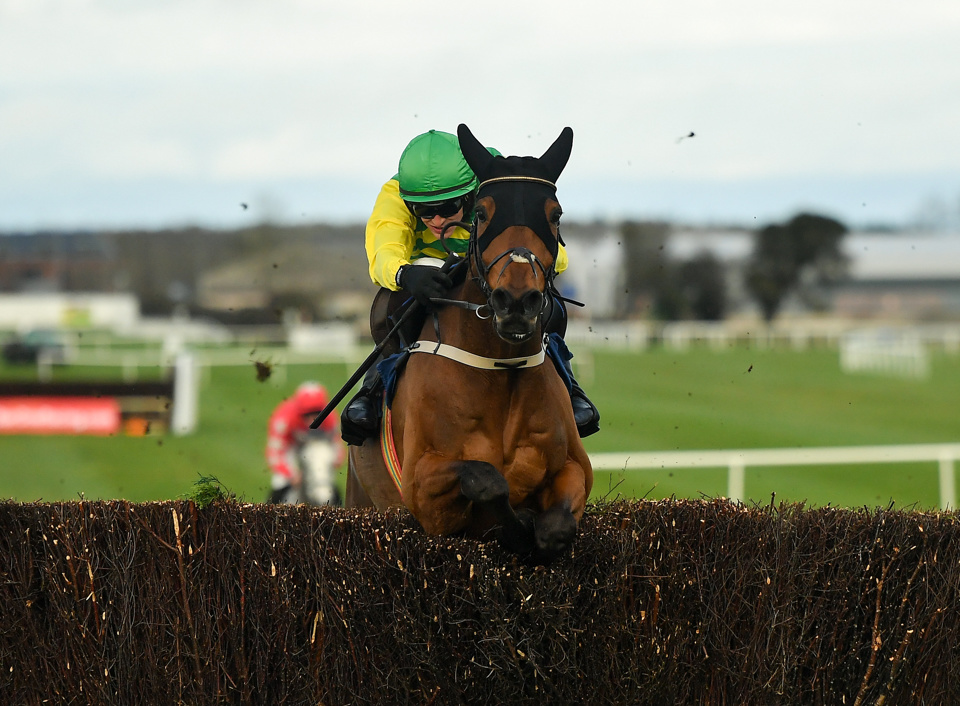 Cash Back is unbeaten over fences for Willie Mullins.

A mouth-watering Dublin Racing Festival takes place at Leopardstown this weekend, and Steve Chambers takes an in-depth look at the Irish Arkle, which takes place on Saturday afternoon and is a premier trial for the Arkle Challenge Trophy at the Cheltenham Festival...

Three of the last five winners of the Irish Arkle have gone on to reign supreme in the Arkle at Cheltenham, so Saturday's running of the Grade 1 two-mile contest is set to provide a whole plethora of vital festival clues.

Five of the top six in the ante-post betting for the 2020 Arkle at the Cheltenham Festival are entered for the Irish equivalent this weekend, so it's set to be a sensational renewal of the Leopardstown showpiece in its own right, and with nearly 100,000 Euros going to the winner, the trainers are sure to have their horses in tip-top condition for the 14:00 contest.

Installed as the favourite for the weekend is the Henry de Bromhead-trained Notebook, who has amassed three wins from his three novice chase outings so far, and has rocketed to the head of the ante-post betting for the Arkle at Cheltenham in March.

A brace of wins at Punchestown were followed by a hugely impressive win in the Racing Post Novice Chase at Leopardstown on Boxing Day, and in that Grade 1 he defeated the Joseph O'Brien-trained Fakir D'Oudaries, who is also entered for Saturday's Irish Arkle, as he looks to recapture the winning thread. A winner of the Grade 1 Drinmore Novice Chase two starts ago, Fakir D'Oudairies was no match for Notebook in their last duel, and O'Brien has the option of sending his star five-year-old to Sandown this weekend for the Scilly Isles Novices' Chase.

Impressive when winning the Drinmore over two and a half miles, Fakir D'Oudairies may just lack the pace to win in top-class company over two miles, so while he oozes class he could well be seen in the Marsh Novices' Chase at the Cheltenham Festival, and it's hard to see Notebook not franking their recent Leopardstown form this weekend, should O'Brien send his emerging talent to the Dublin Racing Festival.

Notebook has the strongest form in the book over fences to date, but de Bromhead - who won this race in 2017 with Some Plan - will have to fend some exciting runners from the Willie Mullins yard.

Laurina crossed the line at her own pace and never featured, fingers crossed she's OK!

Having saddled the likes of Un De Sceaux (2015), Douvan (2016) and Footpad (2018) to victory in this race, Mullins is set to unleash another strong battalion this weekend, and arguably the top of the Closutton handler's pecking order is Cash Back, who is hovering around as a 5/1 third favourite in the latest betting.

A solid novice hurdler, the eight-year-old has come on leaps and bounds following a switch to fences, and having made a winning chasing debut at Navan in November, he then went on to excel at Naas, winning a competitive contest by 12 lengths.

He's now sent into Grade 1 company to show whether he is a top-class novice chaser, and Mullins' charge has shaped like an out-an-out two-miler, whose front-running tactics could well get a few of his rivals struggling from a long way out off a fierce gallop. Improvement is unquestionably needed to claim victory on Saturday, but the strong-travelling Cash Back has all the makings of the next top talent off the impressive Mullins production line, and if he can continue on a severe incline, then the current 12/1 available in the Arkle betting for the Cheltenham Festival will be long gone.

Bapaume and Melon both hold entries and will add more fire to the Mullins team. The former was seen competing in the top three-mile staying hurdle races last season, and finished a creditable fourth behind Paisley Park in the Stayers' Hurdle, so you have to question whether he has enough speed to compete against some speedy novice chasers over two miles.

His jumping is certainly an attribute, but he will prove vulnerable to a quicker horse at the weekend, while Melon was out of sorts for most of last season, and while a switch to fences has galvanised him somewhat he is another of the Mullins team that could struggle. Well beaten by Fakir D'Oudairies two starts ago, Melon was a winner last time out, but much like Bapaume he may just lack that pace to feature prominently here.

A winner for Willie Mullins at Naas, as the previously Grade 2 placed Cash Back makes easy work of the Irish Stallion Farms EBF Novice Chase https://t.co/5Ws0gfwS76

Put The Kettle On is another de Bromhead-trained horse entered for this event, and he impressed last time out when beating Al Dancer in a Grade 2 Arkle Trial at Cheltenham, but that Nigel Twiston-Davies-trained raider was beaten at Doncaster at the weekend, so the form may not be strong enough.

Of the others, Easy Game beat Allaho last time out, and with that horse winning impressively a few days ago then he can't be discounted, but that victory was over 2m 5f, so he will be tapped for toe if taking his chance, while Tornado Flyer was a flop last time out when pulling up in the Naas race won by Cash Back, so it's hard to fancy him.

A race that can be dominated by the front few in the betting, it's the exciting Cash Back that can continue to develop over the larger obstacles for the Mullins team, and a win at the weekend can see him launch into the 2020 Arkle reckoning at the Cheltenham Festival on March 10, but Saturday's race should be an absolute rip-snorting renewal on day one of the hotly-anticipated Dublin Racing Festival.