Longshot Ted: House to strike at Kempton, while there's 20/1 and 33/1 tips for the Cheltenham Festival 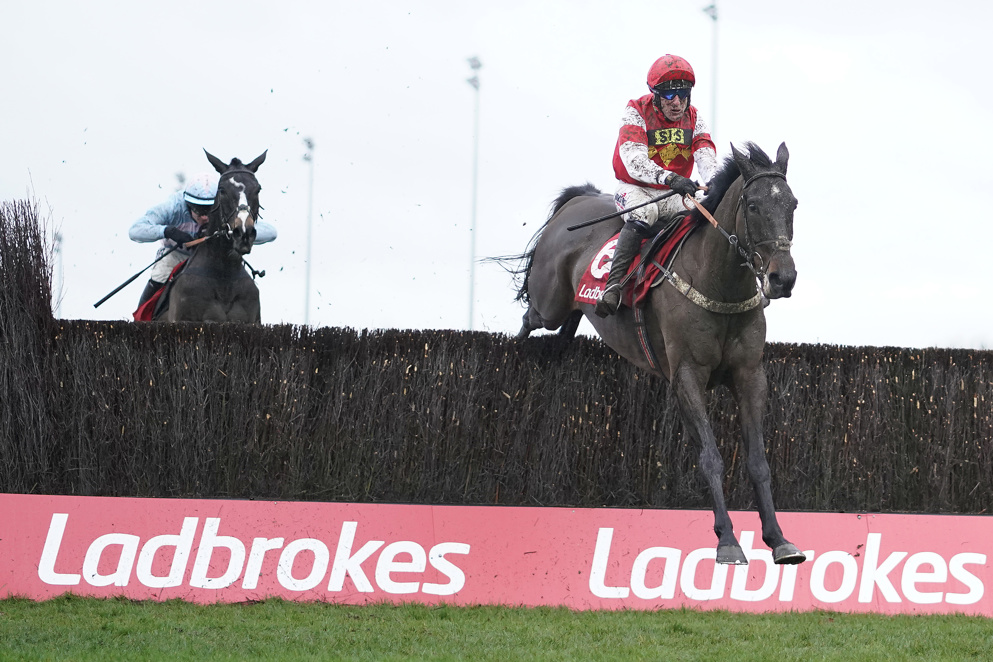 Slate House is a leading contender at Kempton this weekend.

Ed Quigley takes a look at Kempton's action on Saturday, while he has two big-priced selections for the 2021 Cheltenham Festival...

It is the Close Brothers Handicap Chase at Kempton on Saturday, and this looks the perfect opportunity for SLATE HOUSE to get back to winning ways. With the Colin Tizzard team revitalised in recent months, if he puts his best foot forward, he is more than entitled to win. He has rather lost his way since landing the Grade 1 Kauto Star Novices' Chase just over a year ago, but has eased to a mark of 148 from a peak mark of 156, and showed signs of encouragement when third at Wincanton last time out despite not jumping well over an inadequate trip. Returning to the scene of his best performance to date, he has to be taken seriously with the return to 3m looking a major positive. When on song, he is a good jumper and a strong traveller, so you will probably know your fate from early on. He looks too well treated on the basis of his back class from only just over a year ago and is worth one more roll of the dice here.

As far as the Cheltenham Festival is concerned, GRAND ROI is one who stands out in the Coral Cup for the Gordon Elliott team. A lightly raced individual, Elliott has given him the green light for this contest in a recent stable bulletin and I think he looks just the type the flourish stepped back up in trip. Formerly with Nicky Henderson, he is a winner of 3 of his 5 starts over hurdles, so despite being light on experience for a race of this nature, he is usually a sound jumper of an obstacle, and his unexposed tag means he has the propensity to be better than his current mark. I expect this strong travelling type to be buried in the pack and produced late. Better ground could bring about even more improvement, and he makes plenty of appeal at 20/1.

The Kim Muir can be a tricky puzzle to solve, but at 33/1, last year's third, BOB MAHLER looks overpriced. Especially considering that he arrives 5lb lower than he did 12 months ago. He has followed a very similar path to last year, by having his prep run at Musselburgh and connections seem to be eyeing up the prize once again. Warren Greatrex insists that better ground will see him in even better light, and the yard have tasted success in the contest with Missed Approach landing this back in 2018. He jumps, he stays and he has all important Festival experience in the locker. I expect him to be ridden prominently, and off a mark of 135, he could easily be in the shake up once more at a big price.

A first win over fences - and not a bad place to do it!

Milan Native stays on strongest in the Kim Muir, yet another Festival success for the rampant @gelliott_racing 👏 #CheltenhamFestival https://t.co/7xoxcQleN9

#AD New UK customers (Excluding NI) mobile only. £30 in FREE Bets (FB) as £20 in sports bets & a £10 casino bonus (CB). Min stake £10. Min odds Evs. FB applied on 1st settlement of any qualifying bet. FB 7 day expiry. 1 FB offer per customer, household & IP address only. Payment restrictions. 14 days to accept £10 CB, then active for 3 days. CB 5x wagering & max redeemable £100. Game restrictions apply. Cashed out/Free Bets won’t apply. 30 days to qualify. 18+. T&Cs apply
get offer
Bet £10 get £30 in Free Bets
#AD New customers on mobile only. 7 days to claim and stake £10 minimum bet at odds of 1.5 or greater to qualify. Free, void, cashed out or partially cashed out bets do not qualify. Max 3x £10 free bets credited on bet settlement. Free bets must be used on 4 or more selections with selection odds of 1.3 or greater. Free bets are non-withdrawable, and stake not returned with winnings. 7 day expiry. 18+BeGambleAware.org. T&Cs apply.
Double the odds, any sport, any bet, any odds!
#AD 18+ begambleaware.org Only valid for new registrations to Grosvenor Existing members do not qualify, Bet must be placed using real money in combination with the Odds Boost Token, Offer applies to Sport bets only. Max stake is £10. Each way bets are a maximum of £5 each way (£10 total). Customers have 60 days after registration to use the Odds Boost token. T&Cs apply.
Bet £20 & Get it Back As CASH If It Loses
#AD New customers only. Place your FIRST bet on any Horse Racing market and if it loses we will refund your stake in CASH. Max refund for this offer is £20. Only deposits made using cards will qualify for this promotion. T&Cs apply.
Welcome Offer
#AD Bet £10 & Get £50 in Free Bets for new customers at bet365. Min deposit requirement. Free Bets are paid as Bet Credits and are available for use upon settlement of bets to value of qualifying deposit. Min odds, bet and payment method exclusions apply. Returns exclude Bet Credits stake. Time limits and T&Cs apply. The bonus code SPTS365 can be used during registration, but does not change the offer amount in any way.
Bet £10 Get £30 In Free Bets
#AD 18+. Play Safe. New customers using Promo code R30 only, Min £10/€10 stake,  min odds 1/2, free bets paid as 3 x £10/€10, free bets credited after settlement of first qualifying bet, free bets will expire 30 days after the qualifying bet is placed, payment method/player/country restrictions apply.
Bet £20 & Get it Back As CASH If It Loses
#AD 18+ begambleaware.org Max £20 refund on first bet. Bet must be placed in first 7 days of account opening. Only deposits made via Debit Card will be eligible for the promotion. T&Cs apply.
Bet £10 Get £60 in Bonuses
#AD New UK customers only. Register using the promo code BETFRED60, deposit and place first bet of £10+ on Sports (cumulative Evens+) within 7 days of registration. First bet must be on Sports. £20 in Free Bets to be used on Sports, £10 in Free Bets to be used on Lotto and 50 Free Spins (20p per spin) credited within 48 hours of bet settlement. Further £20 in Free Bets credited 5 days after settlement. Bonuses have a 7-day expiry. Payment restrictions apply. SMS verification and/or Proof of I.D and address may be required. Full T&Cs apply.
Bet £10 Get £30 Free Bets (APP Only)
#AD New UK, IE & Malta customers only. 18+. Min £10/€10 first deposit using Debit Card or Trustly. Place a bet of £10 at min odds of 1.5. Free bets expire in 90 days. Full T&Cs apply.
Bet £10 Get £30 Free Bets + £10 Casino Bonus
#AD Minimum deposit of £10 using deposit code 30F - A qualifying bet is a ‘real money’ stake of at least £10 placed on any sports market - Minimum odds of 1/2 (1.5) - Free bets credited upon qualifying bet settlement and expire after 7 days - Free bet stakes not included in returns - Casino Bonus must be claimed within 7 days • To withdraw bonus/related wins, wager bonus amount x40 within 14 days • Wagering req. vary by game • Withdrawal restrictions and Full T&C’s apply. 18+ begambleaware.org
Bet £10 Get £30 Free Bets
#AD Offer includes a free £1 Race Index spread bet to try out our exciting 50-25-10 race markets. Place a £10 fixed odds bet at minimum odds of 1/2. Get 2 x £10 free fixed odds bets + 2 x £5 free Winning Favourites spread bets. Bet with live streaming on all racing and greyhounds! Ts&Cs Apply. 18+ begambleaware.org
£35 Free Bet + 10 Free Spins
If your account has Sportsbook losses at the end of your first day's betting, QuinnBet will refund 50% of your losses as a Free Bet up to £35 (min 3 bets) Plus 10 Free Spins. Even if your account is up, you're guaranteed a £5 Free Bet Plus 10 Free Spins provided you place at least 1 bet of £10 or greater at the minimum odds. T&Cs apply | 18+ New UK Customers Only | BeGambleAware.org
50% Up To £50 Welcome Bonus
#AD 18+ begambleaware.org; New bettors get 50% of deposit up to £50; Once per household; Min deposit £15 (no Skrill/Neteller); Wager a total of 8 times deposit + bonus, with max qualifying bet stake equal to your initial bonus amount; Bonus expires after 60 days; Min odds of 4/5 on singles, or 2/5 per leg for acca; Some bet types excluded; See full terms.
Latest racing results
Wolverhampton
20:20
Full Result
1stQueen Of Ipanema
2/1JF
2ndObsidian Knight
100/30
3rdDaheer
12/1
Wolverhampton
19:50
Full Result
1stVega Sicilia
5/2
2ndSunstone
6/4F
3rdJack The Savage
40/1
Wolverhampton
19:20
Full Result
1stBase Note
13/8F
2ndKing Of The South
2/1
3rdOutbox
6/1
View All Today's Results