Longshot Ted: Clan can lead the charge this Christmas 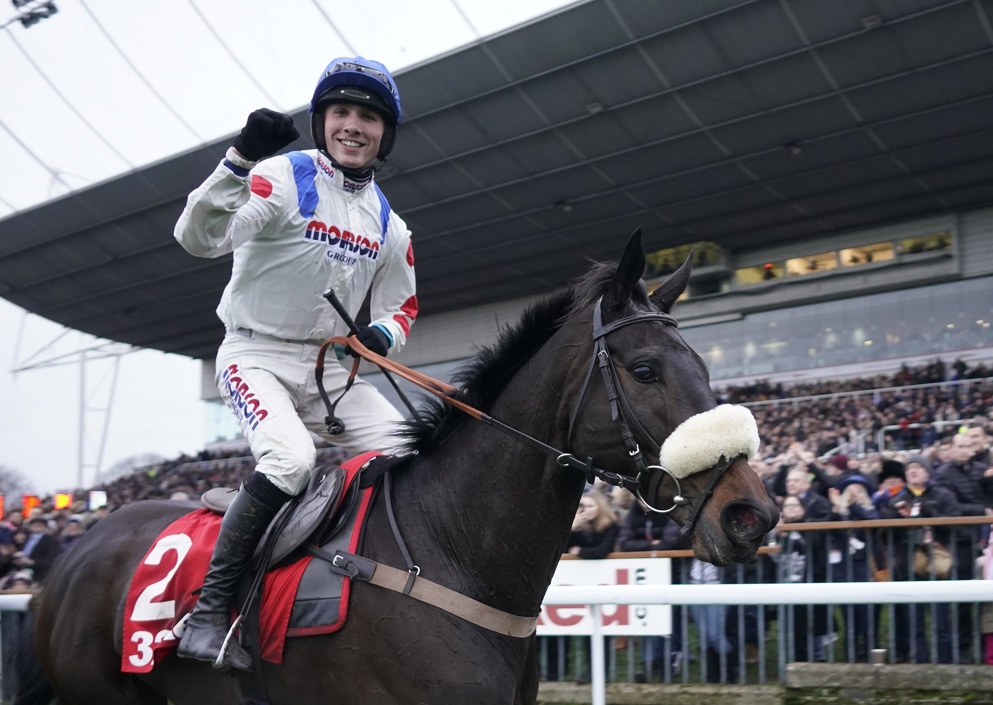 Clan Des Obeaux is bidding to win the King George for the third year running.

In a bumper edition of his weekly column, Ed Quigley takes a look at the top-class racing due to take place over the busy festive period, and picks out his best bets...

There hasn't been much for the Colin Tizzard team to get excited about over the last couple of months. High profile horses Slate House, Copperhead and Lostintranslation have all disappointed, youngsters L'Air Du Vent and Ofalltheginjoints failed to fire and THE BIG BREAKAWAY being turned over at Exeter last time out when sent off 2/9 favourite. It is the latter of those aforementioned horses that I think can put his disappointment behind him and get back in the winners enclosure by landing the Kauto Star Novices' Chase at Kempton.

After winning handsomely by 10 lengths over 3m at Cheltenham on his chase debut last month, the plan to drop him back in trip backfired as he was picked off in the closing stages at Exeter looking one-paced. It will be no easy task, as you would expect in a race of this nature, and the Dan Skelton-trained Shan Blue should ensure this is a serious test of The Big Breakaway's credentials. After a dismal spell for the yard, Mister Malarky winning at Ascot was a welcome tonic, and 'Team Tizzard' might just be coming out of their slump at the right time. The Big Breakaway jumped so well on his chase debut and remains such an exciting prospect he can stamp his authority on the field here.

The King George looks exciting and I don't have a particularly strong view, as I find it hard to split the Paul Nicholls pair of Clan Des Obeaux and Cyrname. If forced however, I would lean towards the two-time winner of the Kempton showpiece, CLAN DES OBEAUX. He jumped and travelled beautifully for a long way in the Betfair Chase, only to get tired in the closing stages in very deep ground.

Back at his favourite venue, with ground likely to be riding much better than that day at Haydock. Lostintranslation is on a retrieval mission after a well below-par performance in the Betfair Chase. He will need to return to his best, but there are big question marks about whether he can operate at a track which doesn't appear to play to his strengths.

BLACKBOW made a really good impression on Chase debut at Navan, looking an absolute natural over fences. He looks overpriced at 7/1 the follow up in Grade 1 company in the Racing Post Novice Chase at Leopardstown. He is a fine physical specimen, and attacks his fences with aplomb. Not short of pace, he could end being one of the protagonists for the big one at Cheltenham in March and has gone a little bit under the radar despite posting an impressive effort first time up over the larger obstacles.

Tom Symonds has been enjoying proceedings so far this season, and BOBO MAC looks to have solid each-way claims to land the Coral Welsh Grand National. The nine-year-old made a pleasing reappearance after a 263-day absence when finishing third to Secret Reprieve in the Grand National Trial earlier this month, travelling well for a long way before tiring. He should strip fitter for that outing, and that was his first start after a wind-op. He shapes these days as though an out-and-out stamina test is what is required and has the scope to improve off a mark of 134 in testing conditions.

Earlier on the same card, ESPRIT DU LARGE can get his act together upped in trip. Conditions will be fine for the Evan Williams trained representative who has been crying out for a stronger test of stamina, and it should take a little bit of pressure off his jumping. This former Grade 1 winner is still unexposed and can exploit a mark of 151.

Over at Kempton, a lot of eyes will be on the potential pyrotechnics provided by Shishkin and Altior taking centre stage. However, from a betting perspective, I head to the Handicap Chase 3.05 where I think ADRIEN DU PONT can get back to winning ways. The 2018 winner of this assignment has been in the doldrums lately, but is starting to make appeal from a handicapping point of view. He won this with authority off 144, and arrives this year off 2lb lower. He should be firmly in the mix for the Paul Nicholls team with the horse returning to a venue he enjoys.

Over at Leopardstown, Gordon Elliott has a very strong hand in the Christmas Hurdle and two-time Cheltenham Festival winner SIRE DU BERLAIS should take a lot of beating. The eight-year-old made a very pleasing reappearance by winning a Grade 2 over 2m4f at Navan last month, coming home with a wet sail. That will have him absolutely spot on for this assignment and he will flourish stepping back up in trip.

The Savills Chase often is an absolute corker and this year's renewal looks like being no exception. Minella Indo and Delta Work are my two antepost fancies as far as the Cheltenham Gold Cup is concerned, and I think that these could be the two to concentrate on here. Minella Indo, trained by Henry De Bromhead has been in scintillating form so far this season and looks to have every chance of landing this, whilst DELTA WORK absolutely comes here an unbeaten horse at the track over fences. Last year's winner, trained by Gordon Elliott, is three from three over the larger obstacles at this venue and is very much on his 'home' patch. Of those at bigger prices, I would be interested in Melon if he took his chance in this. He has shaped like a stayer in recent times and could easily outrun his odds if connections decide to go down this path.