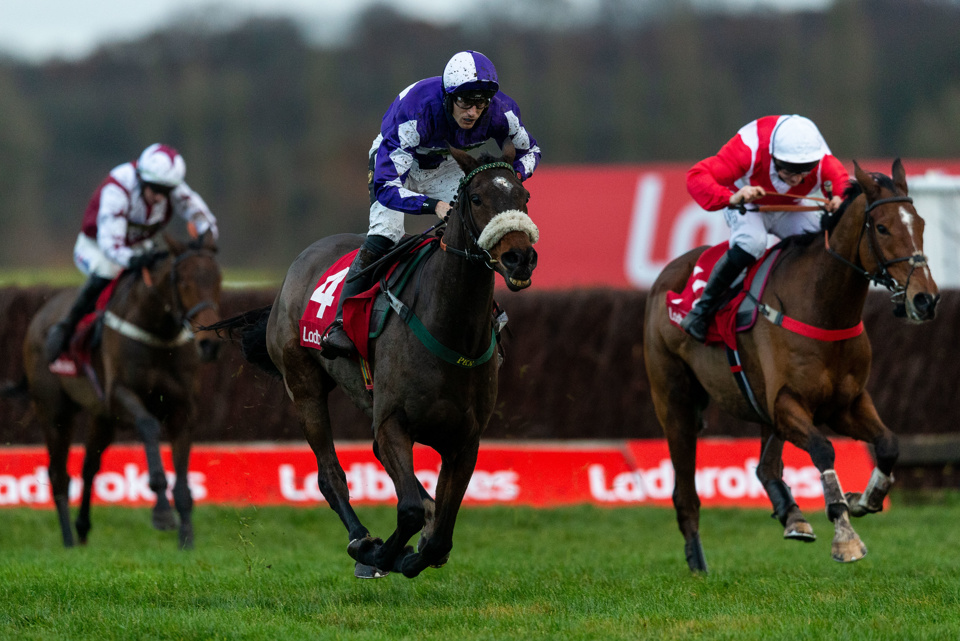 Lady Buttons has entires in both the Mares' Hurdle and the Champion Chase.

Following the release of entries for this year’s Mares’ Hurdle, Joe Tuffin has taken a look at the line-up and picked out his best ante-post bet at this stage…

The picture for this year’s Mares’ Hurdle is a fuzzy one, as the vast majority of the 36-strong list of entries have multiple entries for the Cheltenham Festival at this stage.

Heading the list are Benie Des Dieux and Honeysuckle, who are difficult to separate in the market. The former is the current favourite, and has pervious in this race, having fallen at the final flight when seemingly having the race at her mercy last season - which rather bafflingly was a second high-profile final flight tumble in recent years for the Mullins/Walsh/Ricci combination in this very race.

The Mares’ Hurdle has historically been something of a ‘banker’ Festival victory for Mullins, with the Closutton handler responsible for nine of the last ten favourites in the race, and eight of those obliged. In fact, the only year he didn’t have the favourite in the years in question was in 2018 (when Apple’s Jade was the 2/1-on favourite), and he still won the race with Benie Des Dieux. Barring that late fall, Benie Des Dieux would surely be a dual winner of this, and although she has excellent claims of winning this for the second time in three years, she will face a genuine challenger this time around in the form of Honeysuckle.

It's 2015 and Annie Power all over again! Roksana wins the Mares' Hurdle after Benie Des Dieux falls at the last with the race at her mercy. The Willie Mullins mare is on her feet #CheltenhamFestival #TheFestival https://t.co/S14dZrRCcW

The Henry de Bromhead-trained six-year-old has made a huge impression on her six starts under Rules, winning all six by a combined distance of 46.75 lengths - with two of those coming at Grade 1 level. Indeed, she’s been so impressive that she’s been linked with a tilt at the Champion Hurdle, though connections may well opt to keep her against her own sex on this occasion. On the form she’s shown so far, she’d have a serious chance of getting the better of Benie Des Dieux, with the only potential draw back being that she’s untried on a left-handed circuit so far. However, that seems more of a circumstantial thing after just six starts rather than a slight against her, and she ought to go awfully close if lining up.

The 2017 winner of this race Apple’s Jade comes next in the betting at 6/1, though it’s worth noting that her plans are up in the air at the moment, considering she also has entries in both the Stayers’ Hurdle and the Champion Hurdle. She’s from the very top drawer on her day, with 11 Grade 1 wins under her belt to date, though she’s been more inconsistent of late - failing to fire at each of the last two Cheltenham Festivals. Indeed, her connections hinted at retirement before she pulverised a strong field at Leopardstown last month, and may well swerve this meeting entirely considering that she seems to hate the course.

Last year’s winner Roksana is the fourth favourite at the time of writing, with quotes of 10/1 about her. The eight-year-old Mare bought Dan Skelton his first ever Grade 1 success in last year's renewal, although as mentioned above it came in rather fortuitous circumstances. She’s has since proven that she’s up to the task, however, with a string of creditable efforts, including when a narrow second to If The Cap Fits in the Liverpool Hurdle at Aintree at the end of last season. However, she looks held on form with both Benie Des Dieux and Honeysuckle, and would need more for win purposes. Also entered is Laurina, though she has been plying her trade over fences so far and seems likely to head to either the Arkle or the Marsh Novices’ Chase - while the same comments apply to last year’s sixth Elimay.

With several of the market principals unlikely to take their chance, it could be worth siding with one at a price, namely the Phil Kirby-trained Lady Buttons. She’s become something of a fan favourite over the last couple of seasons thanks to a string of likeable performances over both hurdles and fences, including when winning a pulsating mares’ chase at Doncaster last month. Her versatility means that she also has an entry for the Champion Chase, though her trainer has mentioned that there’s a sense of unfinished business after a luckless fourth in this race last year, so it would be no surprise to see her line up once again. She’s got something to find on form with the likes of Benie Des Dieux and Honeysuckle, but she’s admirably consistent and seems to be improving all of the time. Bearing in mind that plenty of those above her in the betting won’t line up, the 20/1 on offer feels big, and she ought to be in the frame at the very least. She looks worthy of an each-way bet, with the 14/1 on offer under non-runner, no bet also making plenty of appeal if you don’t want to gamble on which entry she eventually takes up.