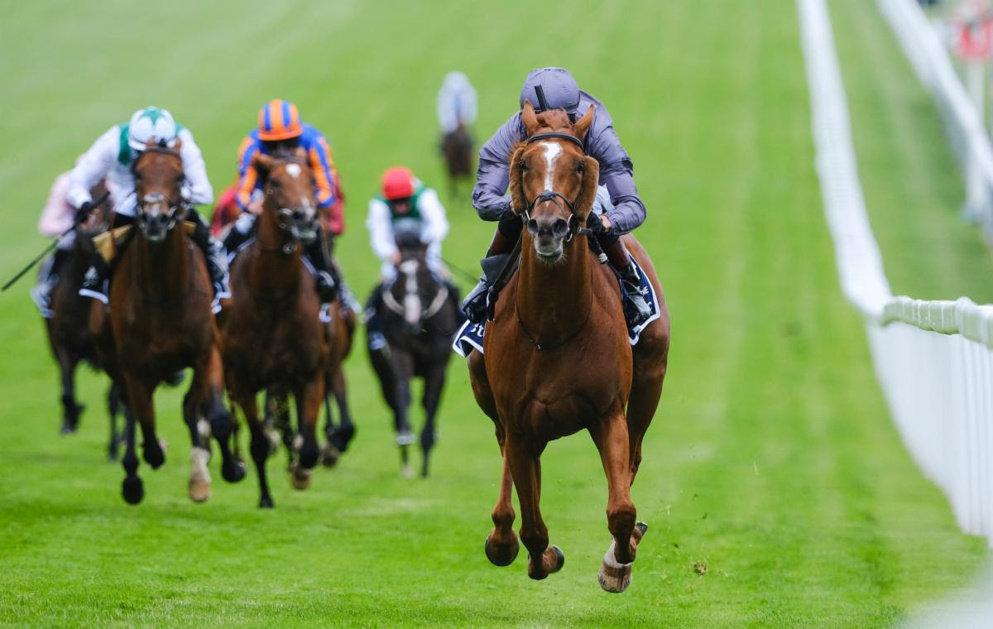 Serpentine was an emphatic winner of the Epsom Derby in July.

Nick Seddon profiles the Epsom Derby hero Serpentine, who was supplemented for the Prix de l'Arc de Triomphe on Wednesday at a cost of €72,000...

Serpentine's crowning moment to date is undoubtedly his barnstorming success in this season's Epsom Derby, and he arrived at that classic as a typically unexposed type from the Aidan O'Brien yard - in that he was regally bred as a son of Galileo and a brother to five winners, and had won a maiden in deeply impressive fashion on his previous start.

He had looked in need of the experience in his two starts prior to that nine-length maiden success at the Curragh in June, but he quickly clicked into place this season, and brought that devastating style of racing to Epsom in July. Always prominent, Serpentine pulled a long way clear of the field around half a mile from home, before going on to record a scarcely believable five and a half length success under Emmett McNamara - beating rivals who were never nearer than at the line.

We've seen Serpentine just once since that success, and he returned from a 71-day break to finish fourth behind stablemate Mogul in the Group 1 Grand Prix de Paris over the Arc course and distance earlier this month. He was ridden with far more restraint by Christophe Soumillon on that occasion, and while he was ultimately unable to hit the front, there was plenty to like about the performance.

Serpentine only won for the first time seven days ago. He's just made all the running to land the @Investec Derby!

A record eight victories in the most famous Classic of them all for Aidan O'Brien 👏 @EpsomRacecourse #InvestecDerbyDay https://t.co/EMvUpwyprX

Unexposed: With just five starts under his belt, Serpentine arrives here as a very smart performer that's still open to improvement. His run in the Grand Prix de Paris ought to have taught him plenty, and lining up against older rivals for the first time will present him with the opportunity to take his form to a new level.

Tactics: Serpentine blew the field apart when winning the Epsom Derby in July, and he's a fascinating addition to the Arc line-up. Judged on his most recent start, he's unlikely to be handed quite as aggressive a ride here, but he's almost certain to be prominent, something which could work strongly in his favour in testing conditions.

Weight: Serpentine will receive weight from his older rivals as a three-year-old colt, which could prove to be an advantage. He'd likely need to take a step forward from what he's shown so far, particularly with the Epsom form looking patchy at the best of times, but he's certainly going to be weighted to be competitive.

Conditions: The going at Longchamp is described as 'very soft' at the time of writing, with more rain forecast before Sunday afternoon. Serpentine was well beaten on his sole start on soft going on his debut last year, and while that effort alone is worth forgiving, a sustained test of stamina would ask something different of him.

Tactics: If Serpentine is handed a particularly aggressive ride, similar to the one that Ghaiyyath was given in this last year, it could potentially favour his rivals more than it favours him. Indeed, a strongly-run race arguably caused Enable to hit the front too soon 12 months ago, opening things up for Waldgeist, and in particularly testing ground, it would be a huge ask to keep up such a strong gallop all the way to the line.

Needs more: While Serpentine is clearly a very smart colt as an Epsom Derby winner, that win was a freakish performance, and the form hasn't worked out brilliantly since. On the bare form, what he's shown so far is short of what you'd expect from an average Arc winner, and while he's entitled to improve here, he will likely need a career best effort to win.

How will Serpentine fare in the 2020 Prix de l'Arc de Triomphe?

It's difficult to weigh up Serpentine's chances for the Arc, and they could ultimately weigh on both the going and the tactics which are deployed by his jockey. The fact that his connections have spent €72,000 to supplement him can't be scoffed at, and he certainly has the talent on paper to have a serious say - particularly in receipt of weight from his older rivals. If he is indeed handed a similar ride to Epsom, it will be fascinating to see how Frankie Dettori handles it on Enable, but instinct says he will be ridden closer to the tactics deployed here last time out, and sit just off the lead. Both pedigree and his last few performances have suggested that there's more to come from Serpentine yet, and the way he finished his race in the Grand Prix de Paris suggested he'd improve for that outing, but on the bare form he has something to find if he is to have a serious chance of winning. Either way, he is a fascinating inclusion, and he will certainly play a part in the outcome - regardless of whether or not he's involved in the finish.

Verdict: Potential fly in the ointment

Today's horse racing tips at Ayr and Newbury on Sunday. Our resident tipster Chris Baker has four bets for the…

Today's horse racing tips at Thirsk and Curragh. Our resident tipster Chris Baker has two bets for the racing…

Today's Horse Racing Tips: A Word for this Wise pick at Bath
By Chris Baker

#AD New customers only. Place your FIRST bet on any sportsbook market and if it loses we will refund your stake in CASH. Max refund for this offer is €/£20. T&Cs apply. 18+ begambleaware.org
get offer
Bet £10 Get £40 in Free Bets
#AD 18+. Play Safe. New customers using promo code M40 only. 1x per customer. Min £/€10 bet. Min odds 1/2 (1.5). Free bets of 2 x £/€15 issued after first qualifying bet settles. Max £/€10 Bonus. 35x wagering requirement. Max redeemable bonus: £25. Casino bonus expires after 72 hours. UK & Eire only. Additional T&Cs, including free-bet, game, location, payment method and stake contributions apply. begambleaware.org.
Welcome Offer
#AD Open Account Offer. Up to £100 in Bet Credits for new customers at bet365. Min deposit £5. Bet Credits available for use upon settlement of bets to value of qualifying deposit. Min odds, bet and payment method exclusions apply. Returns exclude Bet Credits stake. Time limits and T&Cs apply. The bonus code ‘100BET365’ can be used during registration, but does not change the offer amount in any way. 18+ begambleaware.org.
Bet £10 Get £30 Free Bets + £10 Casino Bonus
#AD Minimum deposit of £10 using deposit code 30F - A qualifying bet is a ‘real money’ stake of at least £10 placed on any sports market - Minimum odds of 1/2 (1.5) - Free bets credited upon qualifying bet settlement and expire after 7 days - Free bet stakes not included in returns - Casino Bonus must be claimed within 7 days • To withdraw bonus/related wins, wager bonus amount x40 within 14 days • Wagering req. vary by game • Withdrawal restrictions and Full T&C’s apply. 18+ begambleaware.org
Bet £10 Get £30 + 60 Free Spins
#AD New UK & NI customers only. Promo code SPORTS60. Deposit and place first sports bet of £10+ in one transaction, at odds of Evens (2.0)+, settled within 60 days. First bet must be on Sports. £30 in Free Bets credited within 48 hours of bet settlement. 7-day expiry. Payment restrictions apply. SMS validation may be required. Max 60 Free Spins on Justice League Comics. 7-day expiry.  Full T&Cs apply. 18+ begambleaware.org
Up To £100 In Free Bets
New customer offer. Place 5 x €/£10 or more bets to receive €/£20 in free bets. Repeat up to 5 times to receive maximum €/£100 bonus. Min odds 1/2 (1.5). Exchange bets excluded. T&C's apply, 18+ begambleaware.org
Bet £10 Get £40 In Bonuses
#AD 18+ new customers only. Deposit, opt-in and place a £10 qualifying bet at odds of 2.00 or greater within 7 days of opening a new account; excludes cashed out bets. Receive 3x £10 Sports Free Bets, valid on set events only at odds 2.00 or greater. Plus, a £10 Game Show Bonus, selected games, wager 40x to withdraw a max of £250. Bonuses expire in 7 days. T&Cs Apply, see below. Please Gamble Responsibly. 18+ begambleaware.org
Bet £10 Get £20 In Free Bets
#AD Min stake £10. Min odds 1/2 (1.5). First bet only. Free bets expire in 7 days. Cashed out bets won’t apply. Payment method restrictions. Online UK customers only. 30 days to qualify for £20 in Free Bets. 18+. T&Cs apply
Money back As A Bonus Up To £40 If Your First Racing Bet Loses + £10 Casino
New customers only. 18+, BeGambleAware.org. Min deposit £10. Money back as bonus. Wagering requirements: Racing 3x at min. odds of 1.40 (2/5), Casino 35x. Only one bonus can be used at a time, Racing bonus must be wagered before using the Casino, unless the bonus has been forfeited. Bonus will expire after 7 days of opt-in. #ad
Bet £10 Get £5 Or 50% Losses Back Up To £25
To activate your Sportsbook 50% Back Welcome Offer, simply deposit and bet on any Sportsbook markets of your choice at odds of evens (2.00) or greater. If your account has Sportsbook losses at the end of your first day's betting (23:59), we'll refund 50% of your first day's losses as a Free Bet up to £25 (Minimum 3 bets required). If your account is up, you're guaranteed a £5 Free Bet provided you place at least 1 bet of £10 or greater at minimum odds evens or greater. T&Cs apply. 18+ begambleaware.org
Advert Disclaimer
Horseracing.net is a free online resource which endeavour to provide helpful and useful content and odds comparison to its visitors. Please be advised that Horseracing.net accepts affiliate commission from the companies appearing on the site, and agreed commission levels impact the location and order in which the companies (and/or their products) are presented on the website. Any ratings that appear on this site is determined by our subjective opinion of the brand but also based on market share and reputation, each brand's conversion rates, commission paid to us and general consumer interest. Company listings on this page don't imply our endorsement. We do not feature all providers on the market. Except as expressly set forth in our terms and conditions, all statements and warranties regarding the information presented on this page are disclaimed. The information, including odds, which appear on this site is subject to change at any time.
Today's Most tipped
Adrien Du Pont
Kempton 17:20
1/6
13 Tips Bet Now
Ripper Roo
Market Rasen 17:00
4/9
13 Tips Bet Now
Scarlet Bear
Pontefract 15:30
4/7
12 Tips Bet Now
Bob And Co
Hexham 15:52
2/11
12 Tips Bet Now
Latest racing results
Ayr
17:20
Full Result
1st Vina Ardanza
15/2
2nd Masaccio
5/1
3rd Drumbear
9/1
Dundalk
17:15
Full Result
1st Iva Batt
16/1
2nd Roses Blue
4/1
3rd Ginsburg
3/1
Newbury
17:05
Full Result
1st Flyin' Solo
6/1
2nd Aaddeey
9/4 F
3rd Amir Kabir
22/1
View All Today's Results