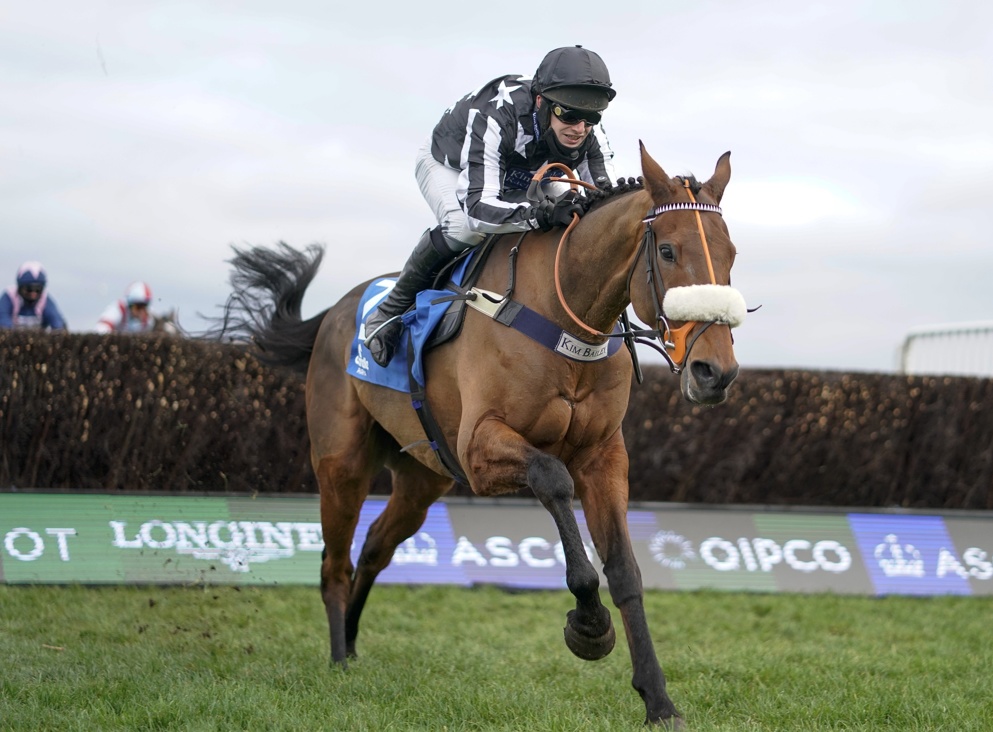 Silviniaco Conti Chase Tips: Imperial Aura is unbeaten this season and is a warm order for Saturday's contest.

Steve Chambers previews the Grade 2 Silviniaco Conti Chase at Kempton Park, where Imperial Aura bids to enhance his Ryanair Chase claims with a win, but will face three notable rivals in a thrilling renewal...

Four runners will line up for the Silviniaco Conti Chase at Kempton Park on Saturday afternoon, and Imperial Aura will line up as a red-hot favourite, as the Ryanair Chase second favourite attempts to notch up his third win this season. However. the Kim Bailey-trained star will face three strong-looking challengers in the 2m 4f 100y contest, and we assess the chances of all four runners here...

A revelation since switching to fences, Imperial Aura ended last season with an authoritative victory in the Novices' Handicap Chase at the Cheltenham Festival. One of the most exciting second season chasers heading into the 2020/21 National Hunt season, the eight-year-old has continued to blossom and progress over the larger obstacles, and kicked off the campaign with a comfortable win in the Listed Colin Parker Memorial Chase at Carlisle. Stepping into Grade 2 company for his next outing, Imperial Aura took on some smart rivals - including Itchy Feet and Black Corton - in the 1965 Chase at Ascot, but that duo were no match for Bailey's raider, who cruised to an emphatic five-length success.

Instantly slashed in the Ryanair Chase betting in the aftermath of that Ascot win, Imperial Aura is now around a 6/1 joint-favourite with reigning Ryanair hero Min, but a win on Saturday could see Bailey's charge leapfrog the Willie Mullins-trained star into outright favouritism. Imperial Aura's slick jumping has proven to be one of his finest attributes, and he can showcase that again on Saturday, while the trip of 2m 4f 100y should play into his strengths, as he showed when winning at Carlisle and Ascot this season that he can excel over a trip of around two-and-a-half miles.

His record of four wins and two seconds over fences highlight what a consistent, classy horse he is, and while he will need to give 6 lb to two of his rivals (Master Tommytucker and Clondaw Castle) on Saturday, he has a lot more potential class than that duo, and this contest should prove as an ideal stepping stone to a crack at the Ryanair Chase on March 18. Bailey could hold Cheltenham Gold Cup aspirations in the future, but this season all roads lead to the Ryanair Chase, and a win at the weekend will enhance his already lofty reputation even further.

Verdict: Hugely exciting chaser, who sparkled at last year's Cheltenham Festival. Two wins already over fences this season show he is in great order, and he is the one to beat,

This young chaser is on the up!

A smart chaser for Tom Taaffe, Riders Onthe Storm improved immeasurably for a move to the yard of Nigel Twiston-Davies last season, as having beaten the likes of Cepage and Oldgrangewood at Aintree, he then went on to outclass On The Blind Side in an impressive graduation chase success at Ascot. A return to the Berkshire venue two months later saw him claim his first Grade 1 victory, as he downed red-hot favourite Cyrname in the Ascot Chase, which saw him launch into the 2020 Ryanair Chase picture.

A faller in that Cheltenham Festival event, Riders Onthe Storm made his seasonal reappearance this season in the Shloer Chase at Cheltenham's November meeting, but he was no match for the classy Put The Kettle On, who finished over 50 lengths clear of the Twiston-Davies-trained raider. Now looking to get back to his best in Saturday's Silviniaco Conti Chase, Riders Onthe Storm has some notable questions to answer, but if he can recapture the form that saw him land Ascot Chase glory last season then he could be a notable thorn in the side of Imperial Aura.

As big as 25/1 for the Ryanair Chase at the time of writing, the Naunton in-mate has some questions to answer, and while Imperial Aura is a solid betting option, Riders Onthe Storm needs to show that the fire still burns bright, but if he can recapture the form he showed when notching up a quickfire hat-trick last season then he warrants respect.

Verdict: If he can recapture last season's form then he could be a major player, but having struggled at Cheltenham last time out he has questions to answer.

Fourth in the 2019 Arkle Challenge Trophy, Clondaw Castle has competed in a host of hot handicap chases over the last couple of seasons, but was last seen finishing third in the Grade 2 Peterborough Chase at Cheltenham. Well beaten that day by Mister Fisher, Clondaw Castle looks to be up against it against proven Graded winners, but he has shown to be a model of consistency this term, so if some of the fancied contenders flop then George's raider could pick up the pieces.

A gallant runner-up in the Old Roan Chase at Aintree in October, Clondaw Castle then built on that fine effort with a comfortable success in a competitive handicap chase at Newbury in late November. Handed the stiff task of the Grade 2 Peterborough Chase on his last start, Clondaw Castle was unable to live with the classy Mister Fisher, while George's raider was also well beaten by Amy Murphy's former Betfair Hurdle winner Kalasknikov.

Remaining in Grade 2 company this weekend, Clondaw Castle is the likely outsider of the quartet, but having shown to be in decent form this season he is sure to run a creditable race, and while he will be no match to an on-song Imperial Aura, he can duly pick up some decent prize money.

Verdict: Smart handicapper, who has been in decent form this season. However, this could be beyond his capabilities and makes limited appeal against some star opposition.

Cyrname and Traffic Fluide are both up and ok after their falls. https://t.co/QteVDiszx4

A chequered career over fences saw him fall in three of his first four runs over the larger obstacles under Rules, but when the Paul Nicholls-trained Master Tommytucker puts in a clear round of jumping he is a really smart performer. A notable beginners' chase success over Who Dares Wins and Saturday's Relkeel Hurdle contender Thomas Darby in November 2019 showed the Ditcheat raider at his best, while wins at Haydock Park and Huntingdon in November 2020 added more silverware to his CV.

Well fancied for the Caspian Caviar Gold Cup at Cheltenham in December, Master Tommytucker had the burden of top weight, but could only finish seventh in a race won emphatically by Chatham Street Lad. Now sent into Graded company by Nicholls, the ten-year-old will be in receipt of 6 lb from both Imperial Aura and Riders Onthe Storm, and could relish a return to a small field contest.

While he wasn't disgraced in the Caspian Caviar, the hustle and bustle of a big-field handicap would've tested his frail jumping to the max, so Saturday's four-runner contest should see him being able to concentrate on his pathway over the obstacles, and if he can put in a clear round then is a lively player. However, there's a cloud hanging over his ability at this sort of level, so he could just come unstuck against a proven top notch rival in the favourite.

Verdict: Hit and miss over fences, but has shown he has talent when producing a clear round, but is up against it in what looks a fascinating four-runner renewal.