Today's Horse Racing Tips: Check out our best bets for Taunton on Thursday 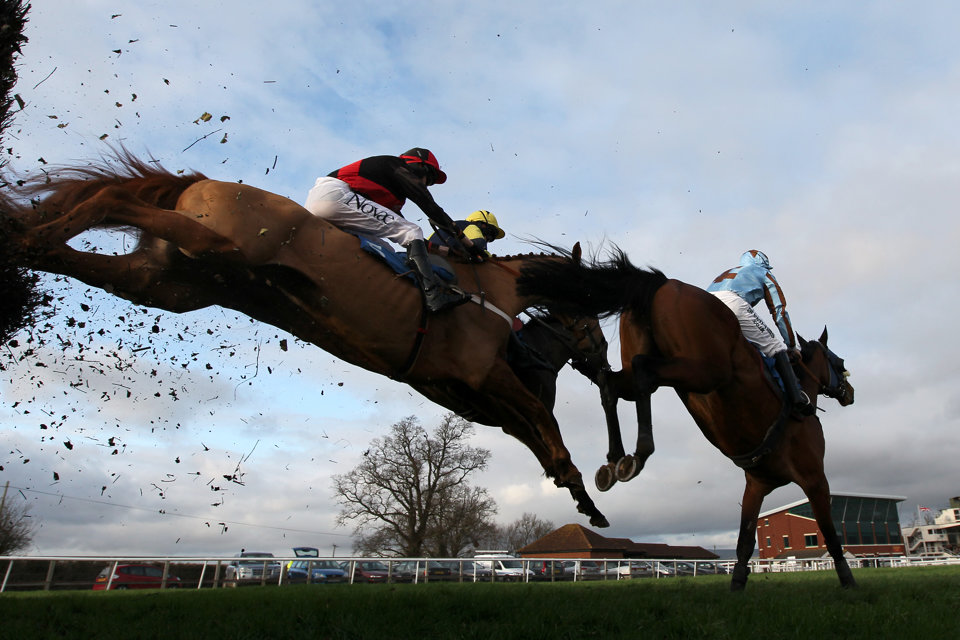 Today's Horse Racing Tips: We have three selections for Taunton on Thursday.

There's a six-race card taking place at Taunton on Thursday afternoon, and our in-house tipster Steve Chambers has picked three tips for the National Hunt action at the Somerset venue...

The action kicks off at Taunton at 12:55 with an intriguing novices' hurdle, and it could be worth sticking with Paul Nicholls, who often ventures away from his local track with a winner, and the Ditcheat handler will saddle Gala De Corton, who has shaped with promise over hurdles. No match for stablemate Knappers Hill last time out, GALA DE CORTON did finish ahead of Earth Company, who he locks horns with again in this contest, and he can duly frank that form. Dan Skelton's Jay Jay Reilly is another danger, but he will have to give weight away to Gala De Corton and it's the Nicholls charge that can taste victory for the first time.

A smart novice hurdler, Gary Moore's ERAGON DE CHANAY competed in the Coral Cup at the Cheltenham Festival a few years ago, but he's struggled to produce the same sort of form over fences, but he looks on a very attractive mark in the 13:55 contest this afternoon, and is a decent value play. Only placed in two of his nine starts over the larger obstacles, the seven-year-old ran a little better last time out at Wincanton off a mark of 119. Dropped a further 2lbs to a mark of 117, Eragon De Chanay is certainly attractively handicapped, and while Catch The Cuban and Roque are entitled to be spearheading the market it's Moore's raider that can cause a shock.

Ben Pauling's NORLEY will go in search of a hat-trick of wins this afternoon when lining up in the finale at 15:25, and the in-form six-year-old can defy top weight and land the three-timer in impressive fashion. Entitled to be relatively short at the head of the betting, Norley is due to go up 12lbs in the future, so is attractively well-in with the handicapper, so if he can replicate his recent runs then he can ease to victory. He's actually 1lb lower than his last winning mark here, so everything points to him scoring a week on from a win at Wincanton.

#AD New UK customers (Excluding NI) mobile only. £30 in FREE Bets (FB) as £20 in sports bets & a £10 casino bonus (CB). Min stake £10. Min odds Evs. FB applied on 1st settlement of any qualifying bet. FB 7 day expiry. 1 FB offer per customer, household & IP address only. Payment restrictions. 14 days to accept £10 CB, then active for 3 days. CB 5x wagering & max redeemable £100. Game restrictions apply. Cashed out/Free Bets won’t apply. 30 days to qualify. 18+. T&Cs apply
get offer
Bet £10 get £30 in Free Bets
#AD New customers on mobile only. 7 days to claim and stake £10 minimum bet at odds of 1.5 or greater to qualify. Free, void, cashed out or partially cashed out bets do not qualify. Max 3x £10 free bets credited on bet settlement. Free bets must be used on 4 or more selections with selection odds of 1.3 or greater. Free bets are non-withdrawable, and stake not returned with winnings. 7 day expiry. 18+BeGambleAware.org. T&Cs apply.
Double the odds, any sport, any bet, any odds!
#AD 18+ begambleaware.org Only valid for new registrations to Grosvenor Existing members do not qualify, Bet must be placed using real money in combination with the Odds Boost Token, Offer applies to Sport bets only. Max stake is £10. Each way bets are a maximum of £5 each way (£10 total). Customers have 60 days after registration to use the Odds Boost token. T&Cs apply.
Bet £20 & Get it Back As CASH If It Loses
#AD New customers only. Place your FIRST bet on any Horse Racing market and if it loses we will refund your stake in CASH. Max refund for this offer is £20. Only deposits made using cards will qualify for this promotion. T&Cs apply.
Welcome Offer
#AD Bet £10 & Get £50 in Free Bets for new customers at bet365. Min deposit requirement. Free Bets are paid as Bet Credits and are available for use upon settlement of bets to value of qualifying deposit. Min odds, bet and payment method exclusions apply. Returns exclude Bet Credits stake. Time limits and T&Cs apply. The bonus code SPTS365 can be used during registration, but does not change the offer amount in any way.
Bet £10 Get £30 In Free Bets
#AD 18+. Play Safe. New customers using Promo code R30 only, Min £10/€10 stake,  min odds 1/2, free bets paid as 3 x £10/€10, free bets credited after settlement of first qualifying bet, free bets will expire 30 days after the qualifying bet is placed, payment method/player/country restrictions apply.
Bet £20 & Get it Back As CASH If It Loses
#AD 18+ begambleaware.org Max £20 refund on first bet. Bet must be placed in first 7 days of account opening. Only deposits made via Debit Card will be eligible for the promotion. T&Cs apply.
Bet £10 Get £60 in Bonuses
#AD New UK customers only. Register using the promo code BETFRED60, deposit and place first bet of £10+ on Sports (cumulative Evens+) within 7 days of registration. First bet must be on Sports. £20 in Free Bets to be used on Sports, £10 in Free Bets to be used on Lotto and 50 Free Spins (20p per spin) credited within 48 hours of bet settlement. Further £20 in Free Bets credited 5 days after settlement. Bonuses have a 7-day expiry. Payment restrictions apply. SMS verification and/or Proof of I.D and address may be required. Full T&Cs apply.
Bet £10 Get £30 Free Bets (APP Only)
#AD New UK, IE & Malta customers only. 18+. Min £10/€10 first deposit using Debit Card or Trustly. Place a bet of £10 at min odds of 1.5. Free bets expire in 90 days. Full T&Cs apply.
Bet £10 Get £30 Free Bets + £10 Casino Bonus
#AD Minimum deposit of £10 using deposit code 30F - A qualifying bet is a ‘real money’ stake of at least £10 placed on any sports market - Minimum odds of 1/2 (1.5) - Free bets credited upon qualifying bet settlement and expire after 7 days - Free bet stakes not included in returns - Casino Bonus must be claimed within 7 days • To withdraw bonus/related wins, wager bonus amount x40 within 14 days • Wagering req. vary by game • Withdrawal restrictions and Full T&C’s apply. 18+ begambleaware.org
Bet £10 Get £30 Free Bets
#AD Offer includes a free £1 Race Index spread bet to try out our exciting 50-25-10 race markets. Place a £10 fixed odds bet at minimum odds of 1/2. Get 2 x £10 free fixed odds bets + 2 x £5 free Winning Favourites spread bets. Bet with live streaming on all racing and greyhounds! Ts&Cs Apply. 18+ begambleaware.org
£35 Free Bet + 10 Free Spins
If your account has Sportsbook losses at the end of your first day's betting, QuinnBet will refund 50% of your losses as a Free Bet up to £35 (min 3 bets) Plus 10 Free Spins. Even if your account is up, you're guaranteed a £5 Free Bet Plus 10 Free Spins provided you place at least 1 bet of £10 or greater at the minimum odds. T&Cs apply | 18+ New UK Customers Only | BeGambleAware.org
50% Up To £50 Welcome Bonus
#AD 18+ begambleaware.org; New bettors get 50% of deposit up to £50; Once per household; Min deposit £15 (no Skrill/Neteller); Wager a total of 8 times deposit + bonus, with max qualifying bet stake equal to your initial bonus amount; Bonus expires after 60 days; Min odds of 4/5 on singles, or 2/5 per leg for acca; Some bet types excluded; See full terms.
Latest racing results
Leicester
13:15
Full Result
1stGrozni
4/1
2ndNot A Light
9/2
3rdScamallach Liath
7/2CF
Lingfield
12:50
Full Result
2ndProfitable Dawn
14/1
3rdDiamond Dreamer
4/1F
4thSassy Redhead
11/2
Leicester
12:40
Full Result
1stThe Boat
9/4F
2ndBoagrius
9/2
3rdDreamsundermyfeet
5/1
View All Today's Results