Top 10 Most Popular Horses: Sea The Stars roars into 9th 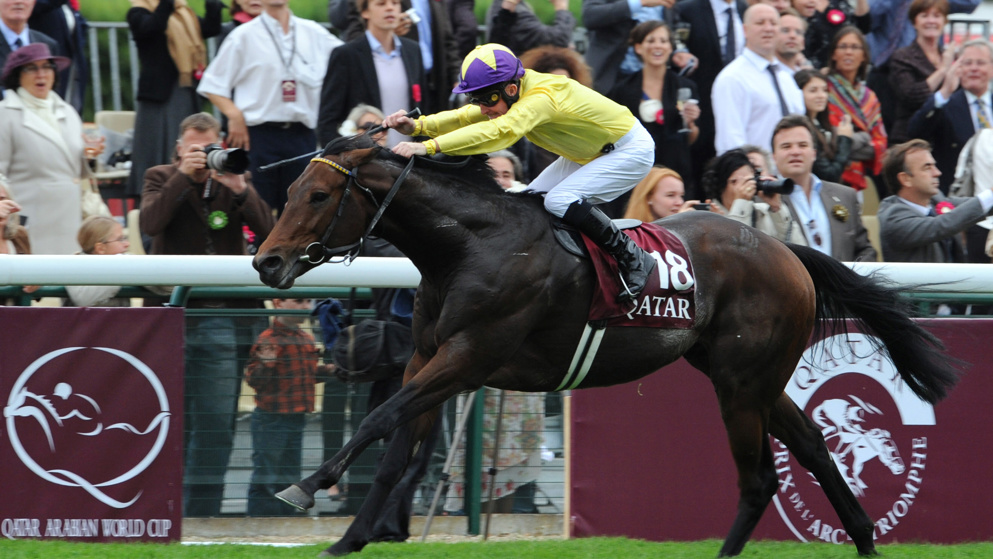 We are back for the latest instalment of our Top 10 Horses Of The 21st Century, and we turn our attentions to number nine on the list and it's the John Oxx-trained Sea The Stars, whose glittering career saw him notch up a flurry of emphatic Group 1 wins...

"Perfection in equine form." That was the memorable statement uttered by BBC racing commentator Jim McGrath as Sea The Stars crossed the line to win the 2009 Prix de l'Arc de Triomphe at Longchamp. It would prove to be his racing swansong, as the Cape Cross colt failed to strut his stuff on a racecourse again, but it was not only his achievements in the most prestigious all-age race that afternoon in France that has earned him a spot in our top-10, but it was his unprecedented career as a whole that has gained him ninth spot.

Making his debut at the Curragh in July 2008, Sea The Stars could only finish fourth in a maiden, but his winning run ignited a month later as he strode to an impressive two-and-a-half length win in a Leopardstown maiden. Progressing at a rate of knots, Oxx sent his exciting juvenile to the Curragh for the Group 2 Beresford Stakes, and he duly ended his campaign with a gutsy half-length success in that event. 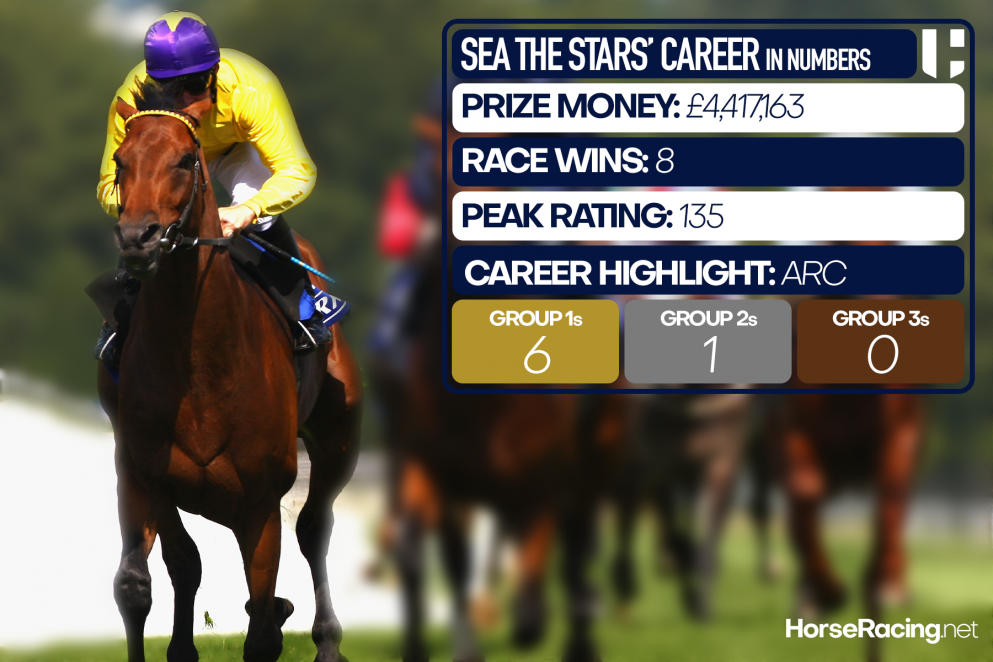 Having only won a Group 2 during his two-year-old campaign, Sea The Stars wasn't talked about with much vigour when discussing that season's Classics, but what racing fans were to witness over the summer and autumn of 2009 was to be something special!

Oxx targeted the British Classics from the get-go and Sea The Stars was sent to Newmarket in early May for the 2000 Guineas, where he was sent off an 8/1 chance. Drawn on the flank, his jockey Mick Kinane kicked to the front two furlongs out and endured a head-bobbing battle with the Brian Meehan-trained Delegator, but it was to be the Irish raider that prevailed to notch up his first Group 1 success.

Showing a fine turn of foot that day to soar to the front, Sea The Stars also saw out the mile trip that day with aplomb, so it was no shock to see Oxx up him in trip next time out, and it was to be the Derby at Epsom Downs that would be next on his itinerary.

As has been the case for the last 15 to 20 years or so, if you manage to beat all Aidan O'Brien's horses then you stand a pretty good chance of coming out on top, and in the Derby Sea The Stars was to face a multitude of Ballydoyle runners with the likes of Fame And Glory and Rip Van Winkle both flying the flag for the O'Brien team. But, as much as Team Ballydoyle could throw at Oxx's superstar, Sea The Stars repelled the O'Brien brigade, with him storming to the front in the closing stages, and maintaining the gallop all the way to the line to beat home a quartet of O'Brien contenders.

The Guineas/Derby double was complete, but was there no plans by Oxx to target the St Leger at the end of the season to complete the Triple Crown, and instead it was to be the Coral-Eclipse at Sandown Park and Juddmonte International at York that would be his next ports of call.

One of the greatest of all time! 😃

Sea The Stars followed up his 2000 Guineas success with victory in the 2009 Epsom Derby, a feat rarely accomplished... https://t.co/zzOgBMfObq

Locking horns again with Rip Van Winkle in the Eclipse, Sea The Stars had to show all his battling qualities, as O'Brien's adversary eyeballed Oxx's superstar in the closing stages and the brace of three-year-olds went toe-to-toe all the way to the line, but it was the odds-on Sea The Stars that prevailed again. Six weeks later a trip to the York would see him attempt to land his fourth Group 1 on the bounce, and with only three rivals in the Juddmonte International then Sea The Stars would arguably have his easiest assignment of the season. All three of his rivals came from the O'Brien yard with Mastercraftsman the obvious danger, but as he had done all season he brushed aside the Ballydoyle battalion and land yet more top-class glory.

With the Prix de l'Arc de Triomphe the ultimate end-of-season aim, Sea The Stars warmed up for the event with a return to racing in Ireland and in early September he lined up in the Group 1 Irish Champion Stakes at Leopardstown. With the usual pacemaking tactics adopted by the O'Brien team, it was Fame And Glory from that squad that kicked for home early, as he attempted to take Sea The Stars out of his comfort zone, but Kinane exuded confidence on the odds-on jolly, and the writing was on the wall in the final furlong as he cruised past Fame And Glory and he kicked clear.

No horse had been such a dominant figure with such regularity at the highest level as Sea The Stars had been, and one Sunday afternoon in France in October he attempted to make it six Group 1 wins in six months in three different countries. And, as they say, the rest is history, as Sea The Stars produced his finest performance on a racecourse with a spectacular win in the Prix de l'Arc de Triomphe.

John Oxx knew what it took to win the Prix de l'Arc de Triomphe, as in 2000 he had saddled the three-year-old Sinndar to glory in Europe's most prestigious all-age Flat race, but there was a lot more pressure this time around with Sea The Stars heading across to Europe as a real superstar, and sent off the 4/6 favourite for the 2009 Arc, the son of Cape Cross was expected to win.

However, Sea The Stars was forced to use all his brilliance to get the job done, as mid-race traffic problems could well have scuppered a lesser horse's chances, but Oxx's trailblazer was not for catching in the closing stages.

Breaking on terms, Sea The Stars found himself on the rail, and with the field all jostling for position in behind the Aidan O'Brien pacemakers, Kinane was forced to suffer in the saddle as Sea The Stars was shuffled back down the pack, and he sat in mid-division behind a wall of horses for the first part of the race.

With two O'Brien pacemakers effectively ignored by the rest of the field, the Ballydoyle leaders were 15 lengths clear heading into the straight, but they were soon to be swallowed up by the peloton, and in the middle of the chasing group was a motionless Kinane on board Sea The Stars, who still remained on the rail, but was tanking along under a confident jockey. Hitting the 400m mark, Kinane pushed the button and asked Sea The Stars to go and win his race! Still with several lengths to find on the backtracking leaders, Sea The Stars had to show his bravery, as Kinane angled his mount out for a clear run.

Showing tremendous agility, Sea The Stars produced an exquisite sidestep that England Rugby World Cup winner Jason Robinson would've been proud of, as Kinane managed to avoid the leaders, who were hogging the rail heading into the last 300m, and in a handful of strides Sea The Stars quickened to the front. A blistering turn of pace put the race to bed at that crucial moment, and the final 200m would be his stage to shine for one last time, as he went on to beat the staying-on Youmzain by two lengths.

A momentous season, but more touchingly a momentous career had come to a close that October afternoon, but what was witnessed that day was a horse in his pomp showing that he was the best of his time, and still to this day Sea The Stars is uttered among those greats of the game.

It gets no better than this! Sea The Stars - 2009 Qatar Prix de l'Arc de Triomphe 🙌 https://t.co/tSSlJD6oWo