Apple Blossom Preview: The Match Race of the Century 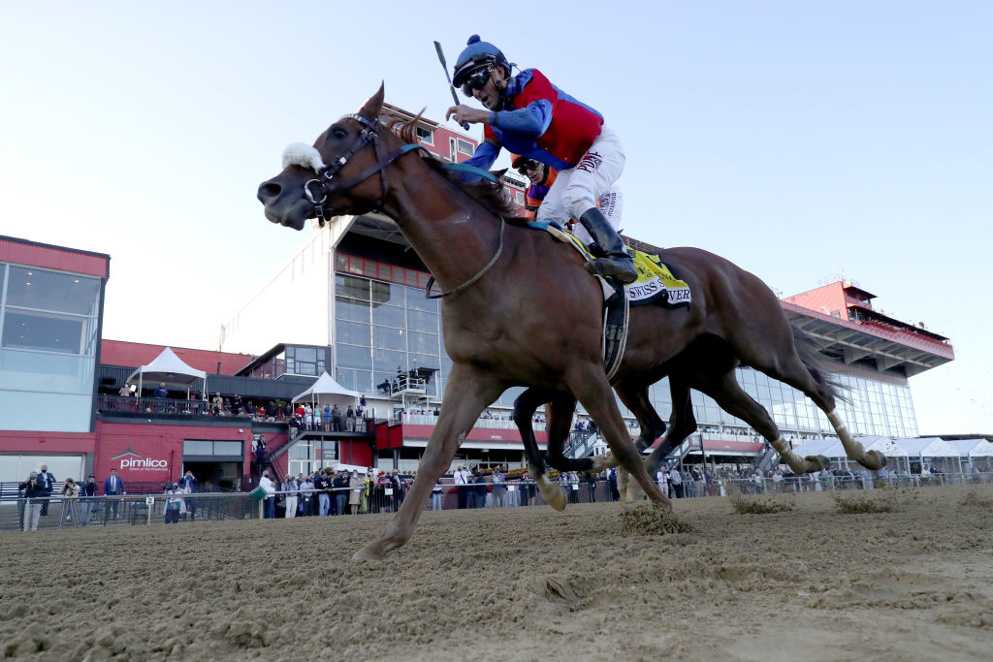 Saturday's marquee match race is Oaklawn Park's Grade I Apple Blossom. Champion Monomoy Girl will faceoff against Swiss Skydiver (pictured above winning the Preakness). See who else draws in for this titanic contest!

The Grade I Apple Blossom marks the beginning of the end for the Oaklawn Park Meet. Once the Arkansas Derby (G1) is in the books, it is one of the last major Grade 1s in the month of April. Historically, some significant older females have won this race in fine fashion—Azeri, Zenyatta, and Midnight Bisou, just to name a few. All these ladies became beloved favorites as their careers developed. This race was just one of many that defined their careers. However, without this jewel, you could say that a career seems somewhat incomplete. Before we arrive at the middle of the season, it is a worthy test of endurance and strength on the dirt and at a route.

HOF trainer Steve Asmussen took this mare over from Todd Pletcher towards the end of last year, and promptly entered her at Churchill Downs in the Falls City (G2). She ended up 3rd, right behind Brad Cox’s Bonny South. Most recently, her conditioner was hopeful that she could take on Monomoy Girl #6 in the Grade III Bayakoa back in late February. It was not to be. She finished 31-lengths back in what was a romp for Cox’s greatest runner. I am unsure how she is going to be able to improve after that disappointing performance. This field is loaded with dangerous entries, and she isn’t one of them. Ricardo Santana will not be able to assist much this time.

Peter Callahan’s star filly was nothing short of fabulous last season as she took on the “Boys” in several contests. Kenny McPeek managed her schedule and work tab to perfection. The Preakness S. (G1) was clearly the highlight, as Robby Albarado rode her into the record books. She returned to Santa Anita for the Beholder Mile (G1), and she was stellar against what amounted to a tepid field. Still, it was a good start to what promises to be another great campaign as a 4-yr-old. This will be a major test (she will carry 122), as she gets a rematch with Brad Cox’s Monomoy Girl #6 (who carries 124). The last time they met, a stumble at the start cost this filly out of Daredevil any chance to rate near the lead in the BC Distaff (G1). Now, she has a shot at redemption on a track that she already has recorded a win on—last year’s Fantasy (G3). This is going to be an unbelievable hoof-to-hoof match race between these 2 routers. Others will try to spring the upset, but all eyes will be on the 2 headliners.

If there is a choice that does not include Monomoy Girl #6 or Swiss Skydiver #2, then this is the pick. I am inclined to rate this Fausto Gutierrez mare out of Super Saver pretty high. She has major talent, and her running style is pure power when it comes to leaving the gate. If she can get to the lead, then she can be very difficult to catch. Last out in the Azeri (G2), Brad Cox’s Shedaresthedevil (with Florent Geroux aboard) beat her to the punch, and she neutralized her greatest weapon—early speed. Had her jockey not used that tactic, Gutierrez’s speedster would have won the day. Now, fitter than ever, her conditioner brings Irad Ortiz into Oaklawn to ride. That move is going to be interesting because Ortiz is just as aggressive as Joel Rosario, who rode her in the Azeri (G2). This one could be a great price, as an alternative to the 2 heavyweights.

Trainer Chris Hartman does not venture into waters this deep without due cause. He clearly thinks that this daughter of Morning Line has what it takes to go up against these Furies. With a couple of runs under her belt at Oaklawn Park, in the Pippin150k and Bayakoa (G3), it is good to see her have some recency over what can be a very unpredictable surface. That pair of efforts weren’t excellent tries, but scoring 4th against 2 fields like those speaks to progress. Still, she is going to be overmatched here, especially with so many heavy hitters drawn in. If she gets 4th in this contest, it will be a quality effort for jockey Ken Tohill and the gang.

Like Letruska #3, the “other” Brad Cox entry has some inviting game that makes her an attractive bet, if you so choose. Against a different field, she would probably be considered a favorite, but in here, it is going to be like ascending a mountain. This is just another example of just how good Cox’s stable truly is. When horses like this one are down the depth chart, that speaks to the quality of racing he has put together. Talk about a meteoric rise for a guy from Louisville. As far as this entry goes, getting Fran Arrieta isn’t like having Javier Castellano, but it will do considering the circumstances.

The best horse in all of North America is this amazing mare out of Tapizar. She’s entered 16 races over the course of her career and won 14 of them. That is quite simply astounding. I think she deserves to be No.1 on the NTRA Thoroughbred Poll, and until someone out there in F&M land can beat her, she has earned the top spot. After she bested Swiss Skydiver at Keeneland’s Breeders’ Cup in the Distaff (G1), she went on the auction block. I am positive that when Brad Cox heard that Spendthrift Farm bought her, and planned to cut a deal with MyRacehorse, that he was absolutely elated that he was going to have the opportunity to continue to train her. She has not disappointed her conditioner yet, and you can bet Florent Geroux is going to do his best to put her in the proper spot once the bell rings. With that major late kick of hers, she is as dangerous as ever. Now, carrying 124 lbs., it is going to be quite a test in this spot to see what she is made of. A win would solidify her place among the greats, but honestly, she is there already.