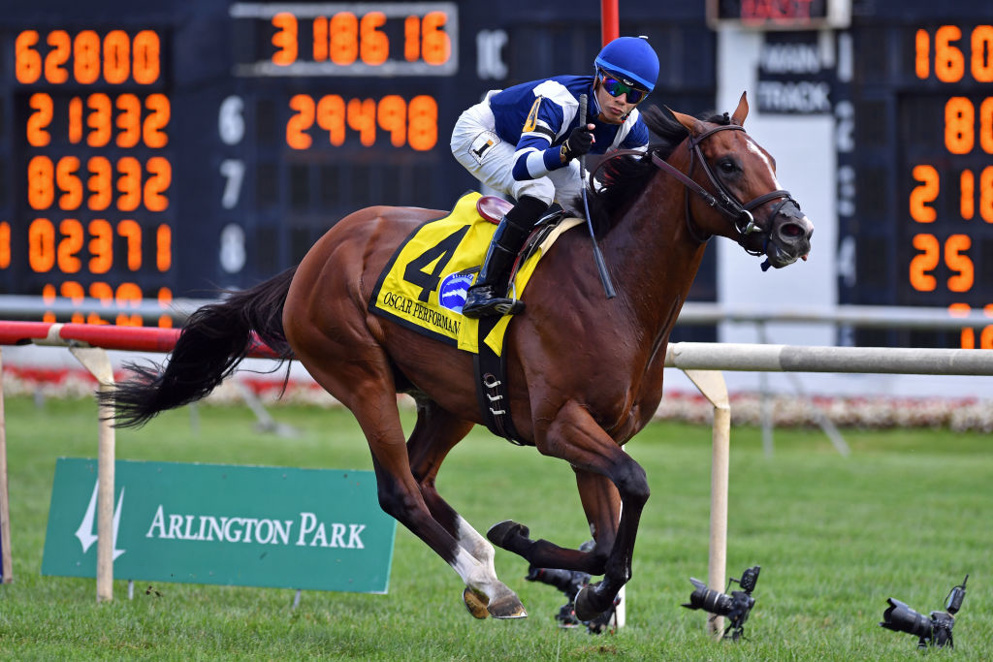 Countdown ... Another week of racing at Arlington Park kicks off on Thursday with an eight-race card. Check out J.N. Campbell's selections below.

Arlington Park, owned by Churchill Downs Inc., is most assuredly entering its last days. To mark that slippery slope, our turf-man is ready to analyze angles and probe for long shots. See what he has in-store below.

This OC10k contest on the grass will test our skills since we have a wide group of older females who will be going a mile on the turf. I want to focus on Northern Alliance #9 who is second out from the barn of Larry Rivelli. He is the king of Arlington, and he puts out a ton of runner from an expansive barn. This time around we are getting a seasoned 7-yr-old mare who finished 2nd last time at Indiana Downs. The late-going energy was impressive, to say the least. Getting Jareth Loveberry should provide continuity. If she holds at 5/2, then that is a bet!

In this turf sprint, I want to take a shot against Away to Return #5 simply because she is a first-time starter for Mike Stidham. In an event like this one, the filly is going to have a tough time knowing what she is doing. Most runners do not come out in on fire because this is all new to them. I am not saying “Never bet a first-time starter …” Instead, look for opportunities to stand against. Stidham is an accomplished trainer, but even he has his limits. Phoenix Thoroughbreds has quite a reputation, as we all know … But this spot will be very tough. I like Jareth Loveberry’s mount—Trouble Making #1. She is out of superstar sire, Into Mischief. At 6/1, that is more than a square price. Her last out was a tough MC16k race, and this race she is drawn into pales in comparison. Her works at Keeneland for Anna Meah look superb. I like the opportunity to cash a ticket in this spot, and maybe a big shot will come in underneath.

In a race like this one, with so many “firsters” (6 of 7) most bettors will lean heavily on the training prowess of Illinois legend Larry Rivelli. I want to take a stand against his pair in this spot because I do like the angle of looking at a runner’s parents and how they performed on debut. To my eye, Constantino Roman is aboard a runner out of Secret Circle who comes in at 21% named Hold Me Closer #6. That is super! I think the filly is a bet, and though trainer Steve Fridley does not have a huge hoard under his care, the big draw is going to be the price. At 10/1, which will probably go higher … we are giving ourselves a great chance to score. Recall, the distance in these contests is only 4½F, anything can happen.

A good group of 12 colts will be going 1 mile on the Arlington grass in what amounts to a high-level OC100k event. It is a bit of a surprise to see this anchor the day, but we are rounding out the card in a terribly inviting way. Tops on most bettor’s lists will be Richiesgotgame #8. On the AW last time, he was in the driver’s seat most of the way in an OC75k roundabout. Larry Rivelli rules spots like these, as evidenced from his numbers. So, wager at your peril. The one weakness I see is jock Chris Emigh, who is not exactly a turfmaster. Maybe the play is putting the field over this one, in hopes of getting a long shot home! Of the others drawn in here, I particularly fancy Chris Block’s Clarestown #5. Jose Lopez is sharp right now, and who doesn’t like a class climber who rallied from off-the-pace last time? Just up in the last furlong in a MSW30k, I am thinking he has found his grass groove. Lothenbach Stables is excellent, and when they have a homebred, I want to wager on them! A colt out of Speightstown is pretty impressive, indeed. The icing on the cake!

Enjoy it while it lasts! Best of luck when it comes to playing Arlington!

Horse Racing Results
TwinSpires Breeders Cup 2022 Promo Codes
By Mick Bates
TVG Promo Codes for Breeders Cup Weekend 2022
By Mick Bates
Saratoga Picks: Campbell's final puzzle on September 5
By J.N. Campbell
Kentucky Downs Picks: Rain reschedules card to Monday on September 5
By J.N. Campbell
Saratoga Picks: Spinaway S. superb betting race on September 4
By J.N. Campbell
Del Mar Picks: Flightline's moment arrives in the Pacific Classic on September 3
By J.N. Campbell
Kentucky Downs Picks: Mint Million for milers on September 3
By J.N. Campbell
Saratoga Picks: Trio of powerful stakes makeup final Saturday on September 3
By J.N. Campbell
Saratoga Picks: Smash Ticket gets her shot in the Prioress S. on September 2
By J.N. Campbell
Kentucky Downs Picks: Turf track in Bluegrass opens on September 1
By J.N. Campbell
Advert Disclaimer
Horseracing.net is a free online resource which endeavour to provide helpful and useful content and odds comparison to its visitors. Please be advised that Horseracing.net accepts affiliate commission from the companies appearing on the site, and agreed commission levels impact the location and order in which the companies (and/or their products) are presented on the website. Any ratings that appear on this site is determined by our subjective opinion of the brand but also based on market share and reputation, each brand's conversion rates, commission paid to us and general consumer interest. Company listings on this page don't imply our endorsement. We do not feature all providers on the market. Except as expressly set forth in our terms and conditions, all statements and warranties regarding the information presented on this page are disclaimed. The information, including odds, which appear on this site is subject to change at any time.
$200 Risk Free Wager
Place your first single bet on any race and get up to $200 back as wagering credit if your horse doesn’t win. T&Cs apply,21+
get offer
$200 Sign-Up Bonus
New Customers Only,T&Cs apply,21 +
$300 Deposit Match Bonus
T&Cs apply,21+,State Restrictions,use code 250MATCH for $250 matched deposit bonus