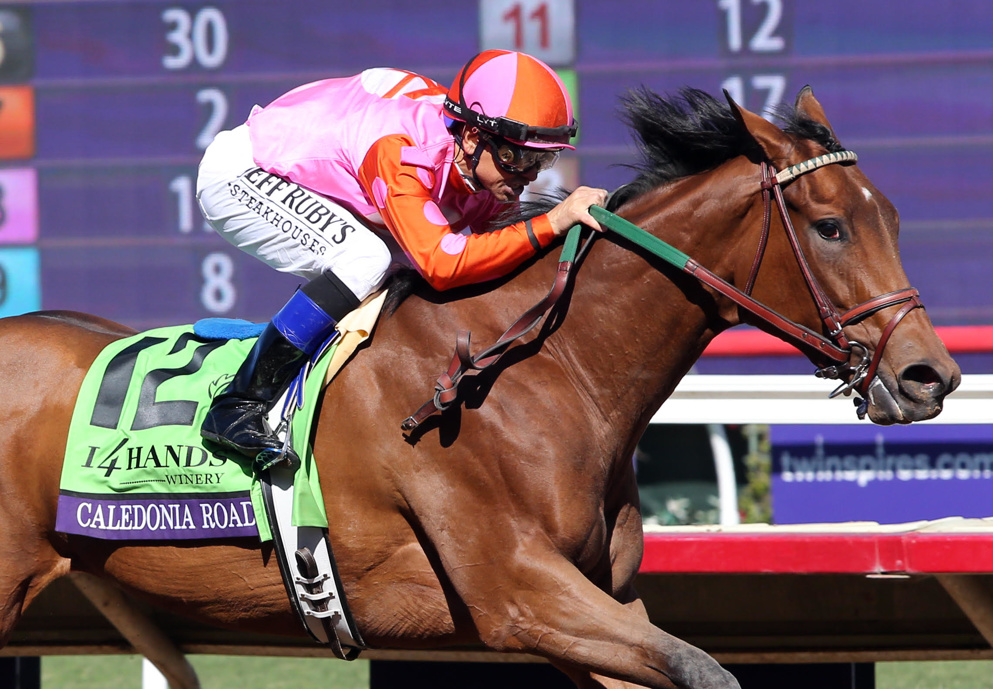 How to Get a Dream Trip at the Kentucky Derby: Q&A with JockeyCam

Wouldn’t it be amazing to ride along with the elite jockeys of today in some of the greatest moments in all of Thoroughbred racing? That perspective . . . that ken . . . that measurement of speed . . . could be more fully understood by us laypeople, who have never had the privilege of going that fast on the back of such a majestic animal. Controlling something that can be rather the . . . opposite . . .

Well, coming to a screen near you, if you haven’t seen these shots already, is the work of a company that was started almost 10 years ago called Equine Productions (EP). They were calibrating the nexus where the impact of “small” tech, the Internet, and innovative camerawork was all coalescing into one. With their hand on the pulse, along the way they reasoned that lightweight equipment could be literally strapped to a rider’s helmet.

Thus, a viewpoint could be marshaled that could be unparalleled. Jockeys couldn’t tell it was there, stewards might benefit from it too, and reality such as this would be beamed into our TVs, PCs, phones, and tablets like never before. Forget “VR,” because there is nothing virtual about these images. They are clear, crisp, and give us a window into all of the action from the saddle.

As the 147th running of the Kentucky Derby approaches, Nathan Horrocks, Visual Director of EP, joins me to talk about JockeyCam, how it will be utilized during the “Big Race,” and where he derives his inspiration when it comes to horses, lenses, and the stories they all can tell.

J.N. Campbell: Nathan, thanks for joining me today on the eve of the Kentucky Derby . . . I want to start with your background and where you come from?

Nathan Horrocks: I grew up in the village of Middleham, North Yorkshire, which has a huge racing history. It is the base for record-breaking trainer Mark Johnston. My Father, who had a great career as a flat jockey, planted the seed by encouraging me to watch Francois Boutin’s Arazi win the 1991 Breeders’ Cup Juvenile. Until that point, horse racing didn’t interest me in the slightest, but the razzmatazz of the American coverage would change the course of my 16-year-old self. I immediately knew that I would find a way to get into the sport.

J.N. Campbell: How did you get into the business of shooting film and founding a company around it?

Nathan Horrocks: After a 10-year career as a steeple chase jockey, I wanted to bring my passion of film and horse racing, together. After meeting my now two business partners (Dave James and Sam Fleet) we set up Equine Productions in 2012. That was originally created to show the sport in a fresh and dynamic way. In 10 years, we have created award-winning commercials, documentaries, and we have just finished our first drama. It tells the story of a jockey struggling with mental health and will be released in the autumn.

J.N. Campbell: That’s fascinating, and we will look forward to that! A simple question . . . what is JockeyCam, and why can this be so significant to the experience that is horse racing?

Nathan Horrocks: JockeyCam is a safety-approved camera that was born out of the frustration of trying to help the public understand the complexities of race riding. Cameras have been used in broadcast racing for many years; however, there have been concerns about their safety, so we worked with the British Racing Authority in the UK and created a device that would be safe to wear if a rider was to fall. In many ways, we can relate to lots of other sports because we can participate at an amateur level. Unfortunately, that can’t be the case with sitting on a half-ton animal traveling at 40mph, while standing on six inches of carbon fiber. Race riding is an art beyond many people’s imagination, and with our current simulcast angle of how we consume racing, the public will never see and understand the split decision of steering your fellow equine athlete in a race that can take less than a minute to compete in. Like the onboard cameras that are used in motor sport, the “point of view angle” is the nearest thing we have to help show the audience the skill, power, and the danger our human and equine athletes endure. With JockeyCam we can now put the audience within the action . . . “LIVE.”

J.N. Campbell: What events related to Thoroughbred racing have you been party to? Give us a rundown . . .

Nathan Horrocks: JockeyCam has taken our crew to many exciting events from our launch in 2015. We were lucky enough to be on the winner Many Clouds in the Aintree Grand National, which was witnessed by over 600 million people around the world. We’ve been to the Hong Kong International, the Melbourne Cup, Royal Ascot, and of course, the Breeders’ Cup. We have been extremely lucky to have the opportunity to provide this technology at these amazing events.

J.N. Campbell: Following up on the last pair of questions, how does the process of storytelling play a role in what you do? How does your own perspective from filmmaking inspire innovation in your designs?

Nathan Horrocks: Inspiration can come from many things. All of mine has come through some kind of imagery, and I hope to do for someone what Arazi did for me back in 1991. If a commercial, a documentary, or footage from JockeyCam can inspire someone to get involved with horses or this sport, that would be extremely gratifying.

J.N. Campbell: You are headed to this year's running of the 147th Kentucky Derby, what is the plan and how are you hoping to accomplish your goals? Involvement with the broadcasts? Please explain . . .

Nathan Horrocks: It’s extremely exciting to be here. Louisville is a special place for me, as it’s where I met my wife (Amanda) at the Breeders’ Cup. Also, America has embraced this technology since its infancy, when the camera was used in the 2017 BC in Del Mar. Since then, I have now moved here to the U.S. to help grow the business. It is encouraging that its use not only serves as a camera, to capture the race live from the saddle, but also to show how a lens can also be a tool to help educate younger riders. It’s simple, if our riders can make better decisions, then we will have safer races, which are better for our horses.

J.N. Campbell: Any trepidation since this is the "Derby?" What would be the ultimate shot for you to record, in your opinion?

Nathan Horrocks: There’s a huge amount of work to bring you these pictures from the saddle. We have to arrive a few days in advance of any event to set up the infrastructure to bring these images along with NBC Sports. The ultimate shot would be to have the winner. At the end of the day, it’s just another camera for NBC Sports to use in their “Live” broadcast, as they serve as the story teller for this great event. Personally, I want someone to appreciate what it takes to manage these beautiful athletes in one of the most competitive environments in sport. That’s what I hope for every time I rig a rider for a race.

J.N. Campbell: Where do you see this particular industry going into the future, and what are some of the upcoming projects that you have in the works?

Nathan Horrocks: Engagement and inclusion are keys to any sport. It’s great to see that play out across the world. We are at our best when we are engaging people from different backgrounds and ethnicities, urging them on to get involved. It’s something I’m extremely passionate about, as horse racing has something for everyone. We just need to open our doors, and pull the curtain back to show the care the thoroughbred receives and deserves. Educating the public helps to reflect why we love this sport so much. Look at what it’s done for this working-class kid from Yorkshire. Saturday, I get to be part of one of the greatest sporting events in the world, not bad for someone who was told at school he was nothing but a dreamer.

J.N. Campbell: Well couched, and dream on, Nathan! Thanks so much for your time, and wish you the best at the Kentucky Derby and beyond!

Nathan Horrocks: Thank you, it was a pleasure chatting with you today!