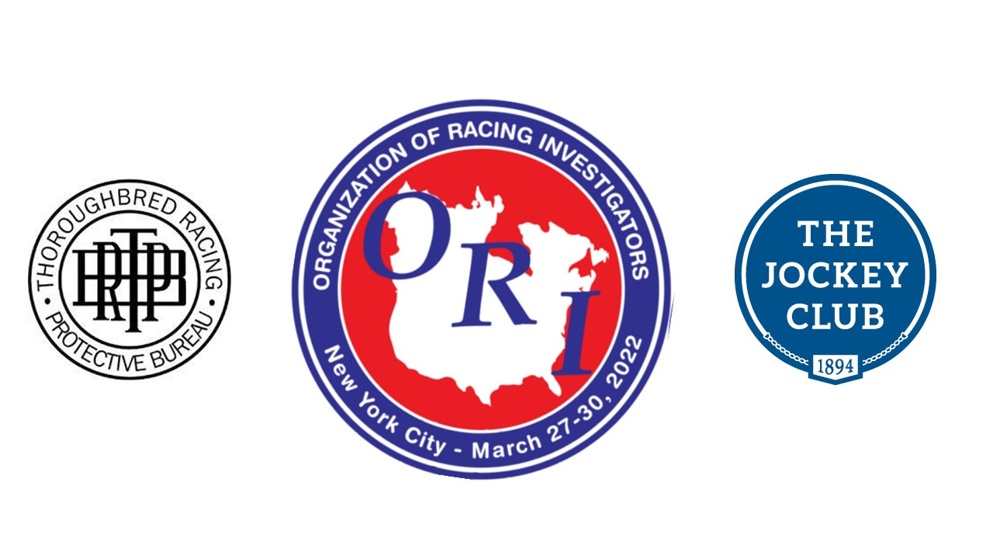 PRESS RELEASE—The 4th Floor Turf & Field Club at Aqueduct Racetrack was the site for Day 2 of the Organization of Racing Investigators. No wet sails … as the schedule caught the wind on the final day. The diversity of topics ran the gambit, from equine-related veterinary health, including pre-race joint treatments, to the efficient nature of implementing microchips and a digital certificate program. Participants were once again treated to a strong mix of data, and anecdotal evidence that was both informative, coupled with a healthy dose of persuasion. As the meeting wraps up with their annual Business Meeting, attendees can return to their own locales, equipped with a plethora of best practices and, maybe most of all, a stack of cards that provides a link to a cadre of experience. All they have to do, no matter the incident … is pick up the phone.

On Tuesday March 29, it was The Jockey Club’s turn to take the lead. Kristen Werner, Senior Counsel for the entity, led off with a speech that touched on a wide-variety of important lines of inquiry. She explained that The Jockey Club continues to be more than just a breed registry; in fact, its safety, welfare, and aftercare initiatives are quite diverse and extensive. Her Power Point outlined how her employer continues to extensively advocate for the horse, the sport, and the business. Over the course of the past 2 decades, The Jockey Club has attempted to lead a disparate industry, when it comes to racetrack safety, equine injury reporting, and how to effectively build scratch-made statistical databases. Tracks can in-turn, access this information in a meaningful way. Werner possesses quite a diverse background, starting with this clearinghouse as a student back in her University of Kentucky days. She spoke passionately about “Aftercare” for retired racehorses, and implored investigators to utilize the resources at their disposal, like Thoroughbred Connect and the Thoroughbred Aftercare Alliance. As she put it plainly, “I look back 10 years ago, and would not have been this positive about a Thoroughbred’s future after racing as I am now.” Resources …

Speaking of … The next presenters, both from the Thoroughbred Racing Protection Bureau (TRPB), called attention to the importance of understanding digital microchips and certificates. Both Teena Appleby and Rachael Mant directly addressed the complicated process of “chipping” 51,000 Thoroughbreds across 77 locations since 2019 with only 58 technicians … oh, and there was a Pandemic going on for most of that time. Luckily, as both of these flexible agents related, Zoom meets and patience helped win the day. Utilizing the latest digital platform technology, and linking a simple smart phone to an app, can readily deploy the necessary data and pictures to accurately identify a horse. Moving away from the old tattoo system, now tracks can scan, and edit profiles to reflect changes that they discover on any equine athlete. To hear Appleby tell it, “The goal is to make sure that the technicians have all of the resources they need, and the proper training to get the right horse, in the right place.” One of the biggest obstacles is having more than 1 chip implanted in any given athlete. Mant told the attendees that they have “found up to 6 chips in a runner,” which indicates a lack of proper oversite. Best practices lead to an increase in the opportunity to create a fair game …

Just before the break for lunch, those in attendance were given a through set of explanations about 2 seemingly very different topics. However, they are not as dissimilar as you might think. Both what Leesa Johnson of the New Mexico Racing Commission, and Richard Schosberg, the President of Take2/Take the Lead in New York, had to say were grounded in the idea that the best possible care for the horse preempts everything else. Johnson’s presentation touched on how tracks can streamline their in-competition, and out-of-competition testing. Her team of investigators are particularly attuned when it comes to watching a horse move from paddock to post. Signs like unseating a jockey, scratching from a race, and even being fractious in the gate, can easily lead to a trip to the test barn. Tracking a horse’s progress, and even looking at the histories of poor practices by owners, are excellent ways to root out problems before the injury of an animal occurs. Likewise, Schosberg is equally committed to protecting racehorses, but his focus resides in the realm of “aftercare.” Both the Take2 and Take the Lead are organizations that “vet” potential owners and find ways to “place” Thoroughbreds into situations that range from a “good home” to a “second purpose” in life. A trainer, breeder, and passionate advocate for the lifeblood of the sport, Schosberg discussed how the “soundness exams” (not “lameness” ones), can inform where a horse’s health resides. Consulting surgeons, a host of others, attempt to get a former runner ready for their next life. He went on to give a number of figures, and it is apparent that the New York Racing Association continues to support initiatives like these—with a budget of $300k. Still, private donations from former trainers, owners, and jockeys are integral to the survival of this great set of programs.

To close out ORI ‘22, 3 New York-based presenters continued the theme of resources that are present for investigators. First, Dr. Scott Palmer of the New York State Gaming Commission gave a strong pitch for more concerted efforts to grapple with the problem of pre-race joint treatments in Thoroughbreds. His wealth of experience over an impressive career has taught him that, “Humans make imperfect decisions based on an utter disregard for the facts.” In other words, the invention of truths can be wholly limiting, and the result only does harm to the horses that make this industry great. Dr. Palmer offered a unique perspective when it came to the descriptive term … lameness. “That is a matter of perspective,” he reminded the participants, “I think that is subjective, and it depends on how you are looking at a particular problem.” Thus, there could be a number of reasons, like a gait abnormality, but the main point is that the only way to discover what is wrong, is an effective diagnosis. With joints being so tiny, there is room for gross errors, and Dr. Palmer went on to urge investigators to make sure that owners, trainers, and veterinarians are not developing bad habits when it comes to therapeutic procedures.

A pair of NYRA representatives then gave an informative set of sessions about how the attendees can utilize the media effectively, and the ways in which onsite providers specifically support health and wellness, particularly when it comes to jockey concussions. The former topic was led by NYRA’s Communications front man, Keith McCalmont. He gave a sensible talk about how investigators and track press agents could work in concert for a stronger tomorrow. Instead of looking at one another as adversaries, training and digging deeper into understanding sensitive issues could go a long way in making public responses unfurl smoothly. As far as the latter presentation, it was Patricia Morrison from Premise Health, who gave an energetic jolt to the discussion when she explained her role as an onsite NYRA health professional. Morrison has the task of addressing any and all medical issues that might arise within the walls of a NYRA racetrack like Aqueduct. Her expertise leads her to deal with the riders, who brazenly want to compete at all times, even if a serious injury (like a concussion) could be present. As she made clear, “We work closely with the investigators to make this racetrack as safe as humanly possible by performing a variety of assessments on a daily basis.” With rest and recovery being her primary mission, she regularly engages with the colony to uncover problems before they derail a career. Whether it is keeping tabs on a jockey’s weight, or making the tough decision to transport an injured rider to a hospital, Morrison is a proponent of keeping everyone safe in any given race. If a jockey returns too soon, or covers up an injury, it can lead to catastrophic consequences for the whole field.

Finally, once the agenda was complete, with thanks to Chair Jean Claude Jaramillo for his savvy planning and troubleshooting skills, the Organization of Racing Investigators turned its attention to more internal matters. A Business Meeting was conducted, and new officers were appointed. These included Ashley Leary and Merlinda Gonzalez (see below in bold). Congratulations are in order … Also joining the ORI Executive Board is J.N. Campbell, who will serve as the group’s Communications Lead. Campbell, a North American-based turfwriter with Gaming USA (Horseracing.net/us), will handle all press releases and correspondence both within, and outside of the organization.

We will see everyone next year in Phoenix, Arizona for the 2023 Organization of Racing Investigators Conference! Stay tuned for more information … 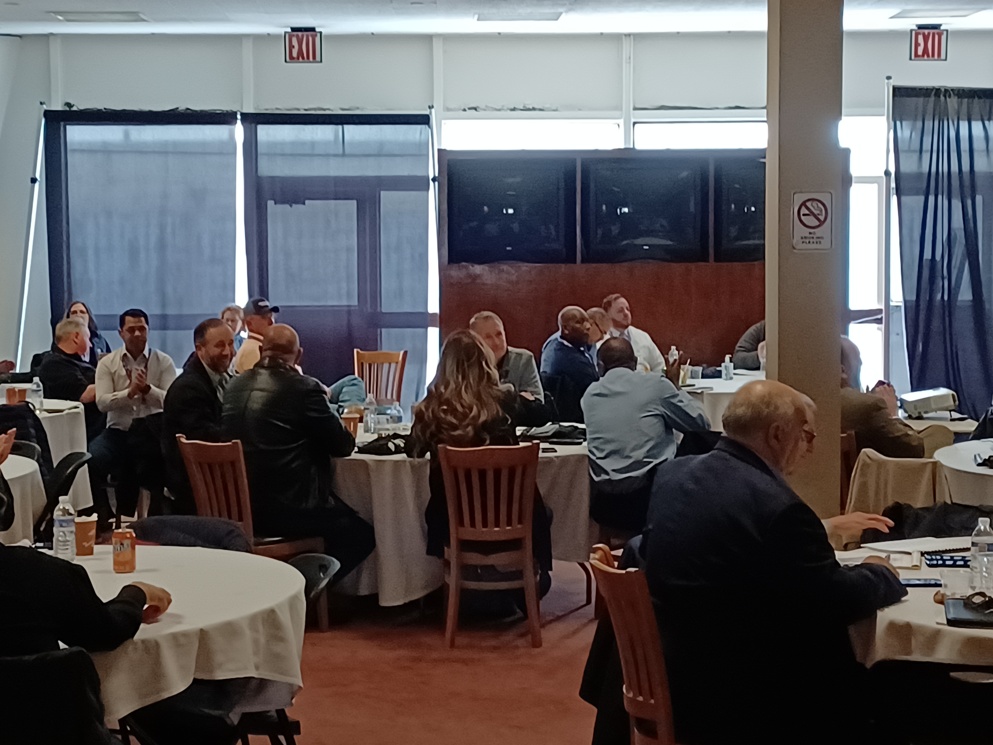 The ORI conducts its Business Meeting to complete the Conference ... new Board Members were voted on, and other housekeeping issues were resolved. The 2023 event will meet in Phoenix, Arizona!