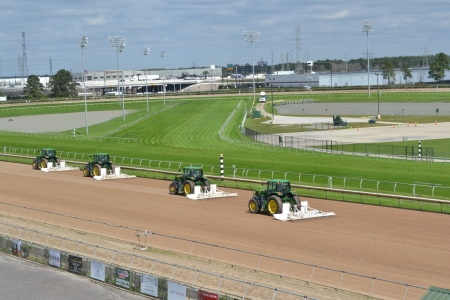 SHRP starts another week of racing ... Texas Champions Night is set for March 26, but there is plenty of action before then! Check out these free selections below!

Regional racing along the Southwest Circuit is alive and well. With low takeouts, Sam Houston Race Park has an industry-low 12% for wagers like the Daily Double and Pick 3s, 4s, 5, and the Space City 6. There is absolutely no reason to wager.

With a solid purse structure, SHRP is now running 4 days a week until Closing Day in early April. Right around the corner is Texas Champions Night on March 26, and that should be an impressive card of races.

Join track announcer Nick Tammaro, and his sidekick, Trey Stiles of NHC fame, for "SHRP-e Time," as they rundown all of their selections. In addition, J.N. Campbell's selections will be featured on the Simulcast, as a bonus ... Let's get some winners!

I have not taken the opportunity to discuss much about the training exploits of Cesar Govea, but he is having an impact on this Meet. His percentages are strong, and with 13 wins so far, that is pretty impressive. As he continues to march forward, in this Claiming Game event he has a mare by Custom for Carlos that looks pretty formidable. With turf experience on her form, you can expect that she will be ready to handle a crowd like this one. Over the past year, she was traded quite a bit in the Racing Office, but that doesn’t mean she hasn’t built a nice dossier. The able Ernesto Valdez-Jiminez, who is riding better than ever on this surface, will get a shot at some redemption. The turf course at Sam has been promoting those that are close to the lead or on it … hopefully, Govea has a sound plan.

Looking for some value on this Wednesday card, we are after a pick that possibly did not live up to their potential in a prior race. Now, returning for another chance, this is the opportunity to back them to the hilt. That means we will have a major opportunity to score … Bret Calhoun has a strong stable based in the Southwest Circuit, and he has an uncoupled entry in this spot that looks promising. I like almost any sprinter by Goldencents because that means they have the ability to get out of the gate, moving succinctly. Last out, this gelding was not able to hold onto the lead that he established early on. Maybe the fractions were too stiff … if new jockey Jose Alvarez can control them, or simply get away from the closers, then this team might have a chance. Let’s roll …

Trainers Broberg and Asmussen continue to battle for the training title at Sam Houston, and it is going to go down to the bitter end. The former has not held the distinction for 10 years, while the latter is looking to collect once again. On the Wednesday card, we are taking to the dirt going a mile, and both trainers have promising entries.  Broberg sends Pinch Assault #1 over from his base at Delta Downs. That Meet is now closed, so it gives him the chance to shift some chess pieces around. Leading rider Ry Eikleberry gets the call, and he is head-and-shoulders above the rest of this colony. This ALLW Co. event is not going to be easy for this gelding by Due Date, but he has 56 starts under his saddle … he will be fine. As for Asmussen, he has a Three Chimneys homebred named Ottothelegend #9 that is coming to Texas after running in a variety of environments … including Oaklawn, Santa Anita, Keeneland, and Churchill. The colt by Uncle Mo was streaky over the past year, and I would think that the HOF conditioner would like to get him a win against an easier group like this one. That doesn’t mean it is going to happen though, since class does not always shine through … fitness does. Stewart Elliott, Eikleberry’s main rival gets the call, which is not a surprise. I like both of these entries, and plan to use them, but on top, I am going to go with Eduardo Ramirez’s entry. Sniveling #6 was a horse I watched throughout the Delta Meet, and the gelding by Will Take Charge had some solid moments in ALLW Co. Most bettors overlook the track that is just on the other side of the LA border … they shouldn’t. Jose Alvarez, the local jockey, “takes charge.” He should be riding a square price, and look for him to be running this one from off-the-pace. I am sure both leading trainers will watch their entries bet down … this is a very good price play option, with a chance. Here is the wager … and yes, it is ice-cold!