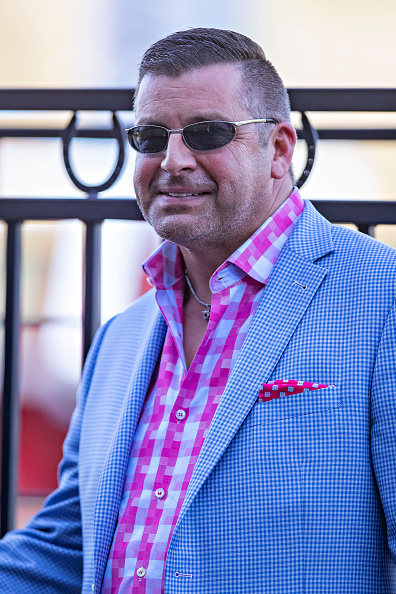 Trainer Robertino Diodoro has a strong entry in the "feature" on the Saratoga Thursday card ... See all of our selections below.

Saratoga Springs, New York is the site, as some of the best horse racing in North America is at The SPA! Today, check out our full run of selections, plus our signature plays accompanied by in-depth analysis. Saratoga rolls on!

Hopefully, as racing at amazing Saratoga continues, we will get some great weather headed our way. The Inner Turf will serve as the stage for this Allowance contest, and it is not short on options. I do not think much of George Weaver’s entry, Turn of Events #2. This is a Hard Spun offspring, which is inviting, but it is also a runner who is 1st off-the-claim. Weaver’s record is fine with these, and this is the 3rd in the form cycle, but I would much rather look elsewhere.

Instead, I much prefer Mike Stidham’s Made My Day #5. Well-bred out of Kingman (GB), this barn doesn’t run all that much up in New York, so when they come to play, it makes for an interesting angle. Tyler Gaffalione is hot right now on the grass, and his mount has the class to measure up. I am hoping that the 5-yr-old gelding will drift up a touch to 5/1, but I doubt it. Maybe some of the money will go elsewhere, and make this one rather unheralded. Will see …

Here is an identical race to No.4, and in many ways it is more competitive than its compatriot. Most ‘cappers will have a hard time picking against Bill Mott’s Landbiscuit #7, and rightly so. He is a colt that is a deserving favorite after a win in a MSW90k at Belmont back in early June. That 6-horse field was off-track that day, and one has to wonder if the son of Orb really belongs on the dirt instead.

If there is a co-favorite, then you could tab Chad Brown’s entry as a likely candidate. Life On Top #9, out of Carpe Diem, has ability, and a win over The SPA turf last year in a Clm event. That was 2 trainers ago, but Brown clearly knows what he can handle. I am sure he gets bet down, and will offer little in value. His last race at Aqueduct was nothing to write home about.

As for a top pick, my choice would be Linda Rice’s lightly-raced gelding out of Golden Lad. I realize this isn’t a sprint, but Calibogee #3 can get this distance easily, and she broke her maiden first time out at Belmont back in late June. Rice is not known as a turf horse trainer, but this homebred for Wes Carter could be a player. The 10/1 M/L price reflects major upside, and Joe Ortiz will serve as guide. His work has improved since the Belmont Meet. This one is a bet in my book.

The New York breds meet up for this slugfest, and we need some Eye of the Tiger playing in the background while handicapping this one. In this distance test, what would have been a 1-turn mile at Belmont is 2 here at Saratoga. Those are the details that need to be accounted for, especially when we come across those runners that did well at one track, as opposed to those that did not at the other.

Out of these 8 that will go, Our Man Mike #1 for Horacio De Paz looks promising in that the Street Boss colt tried this distance at Belmont and finished 3rd. That was a 13-length loss, so possibly Jose Ortiz can use that experience to his advantage this time around. I look at this pedigree as wanting to go shorter, and I am not keen on the low odds. This one can be included, but looking for value elsewhere would not be a poor approach.

Trainer Brad Cox has one at Saratoga that has a pedigree that beguiles interest, since his colt is out of Oxbow on the sire portion of the chart, and A.P. Petal (A.P. Indy) over on the dam side. Bingo John #5 ran at Belmont at 1 1/8th and failed miserably. Maybe a re-run at this distance is in order. Cox pairs with Manny Franco, and the pair have some nice form together. I like the play, but 5/2 is a bit hard to swallow.

Just for the sake of variety, I am going to a Finger Lakes runner named Bustin the Rules #6. This minor leaguer gets the call up to The Show, and the Baker Barn (who also owns this one) is going to hope he is ready for a splendid debut at The SPA. The gelding has 16 starts under him, and 4 wins to go with that … out of Roman Ruler, he could be a sneaky pick. Unsung jock Dylan Davis is workmanlike in his approach. His record is not quite up there with the Ortiz Bros. or Luis Saez, but I respect his ability. This one should be double digits on the tote with 2 minutes-to-go.

This race, the "Non-G" Birdstone, was named for the Nick Zito-trained champ who notched both the 2004 Belmont and Travers Stakes in fine fashion. This edition of the 120k race is a true long route for those who are brave enough to dare. Out of these 7 entries, most have some quality class experience, as they should. Most will be names you recognize because back in their heyday they were considered solid runners. The top of the class mountain is easily Robertino Diodoro’s Lone Rock #3. Is there anyone in this race who can best this dropper? He is ratcheting down from a romp in the Brooklyn (G2) … it was a “powered away” performance. Not a comment you hear all that much in the form notes … If Ramon Vasquez gets that kind of throttle at the 2c, then this race is going to be over very quickly. I do not think the distance of another ¼ is that big a deal.

If there is an antidote to Diodoro’s racing stripes, I think it isn’t Moretti #4 from the barn of Todd Pletcher. Even though this 5-yr-old is the defending champ, he might not be at his best. I would rather seek some value with Orlando Noda’s You’re to Blame #6. Claimed from the excellent outfit of Ron Moquett, last out the 7-yr-old was set to race on the turf, before it was summarily taken off because of inclement weather. He won convincingly in that OC80k, and I think that could be just the nudge he needs to extend out in this contest. His back class is not a sham, even though he was bested by Diodoro’s champ 4x in-a-row. I am game to back him, even if the odds are not in my Mockingjay-esque favor.