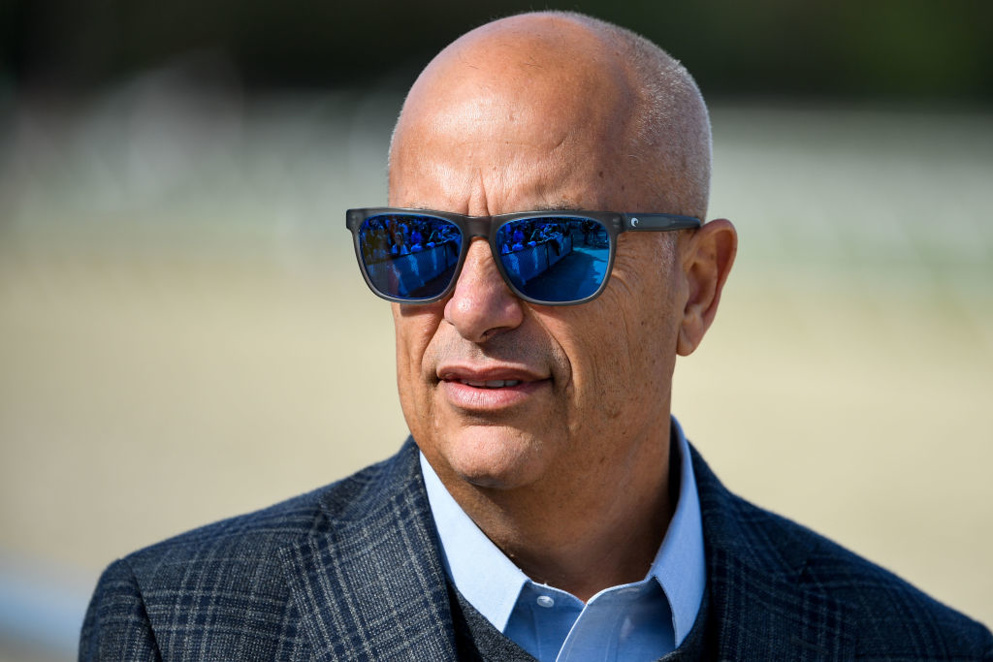 The $500,000 purse for three-year-olds has attracted a full field of 14 runners, which is way up from the five Probables listed on Tuesday morning!

Check out the Entries and Post Positions below along with an overview of the field from our editor.

On paper the Grade II American Turf looks like a battle between trainers Mike Maker and Mark Casse. The former enters Breeders’ Cup Juvenile Turf winner Fire At Will with the latter entering Texas Turf Mile champion Palazzi but Shug McGaughey may have a thing or two to say about that.

We’ll start with Fire At Will. A dalliance with dirt at the Fountain of Youth did not go well back in February where the horse came home a hugely disappointing eighth. A return to turf earlier this month at Keeneland for the Grade III Transylvania was nearly as dispiriting for fans of this horse. Third place isn’t terrible considering his form as a two-year-old - it was not up to the level expected. Should be a big time favorite here but is a luke warm play at best.

My colleague J.N. was in situ at Sam Houston Race Park for their thoroughbred meet and I delved into our archives to see what he thought going into the Texas Turf Mile...

I will put this in plain English… Palazzi #1 is going to win.

This is an ever-loving single for all horizontal wagers, which at SHRP, are part of their 12% low takeout rate. My radar bleeps with intensity because this 3-yr-old colt is a 5-tool player. Speed, pedigree, turf recency, connections (John Oxley), and an accomplished jockey… wait I got ahead of myself; that final category is suspect, especially since Declan Carroll flies in to grab this mount. He is the one piece of this puzzle that concerns me, since his grass mowing abilities are less than sharp. No matter, give me HOF trainer Mark Casse, and that stellar ride into the 5-path that this Pioneerof the Nile exhibited last out in a competitive MSW50k.

Even more exciting, is the mare who produced this 3-yr-old upstart—Kindle. During her days on the track in SoCal for Gary Mandella, she was a speedy mid-range turf sprinter who was incredibly consistent. She is owned by Austin resident, Hank Nothhaft, who sold Palazzi #1 at the Saratoga Select Sale back in August 2019. This mare has the capability to be truly special, as she continues to produce some excellent progeny, including a half to this entry named Made in America. To my eye, the Casse-trained colt, owned by the savvy Oxley, from Nothhaft’s beautifully-talented mare Kindle, is poised to win the TX Turf Mile.

Get on board, anything above 3/1 is a gift in my estimation.

Fair to say he was pretty darn sure that this horse had the class. We’ll see later in the week if he’s still on board now he’s stepping up in competition but if J.N. likes him (and he saw plenty of him) then how can I say anything bad?

Shag McGaughey enters Scarlett Sky who beat Palazzi last time out at the Grade III Transylvania at the Keeneland meet. That is a really solid victory as third place that day was Fire At Will. How Mike Battaglia sets up the Morning Line will be fascinating because that was by far Scarlett Sky's best run. Was it an indication of things to come or a one-off?

Next up is Todd Pletcher’s Winfromwithin - the Into Mischief colt is coming off two straight wins down in Florida - his first two starts on turf. His run in the Columbia at Tampa Bay Downs was certainly worth noting.

This race seems to have attracted plenty of winners at the lower level looking to step up in class. This could well mean plenty of value in the betting pools as bettors are likely not to have seen all the contenders. Annex has won three straight for Bill Mott down at Gulfstream and has a very nice pedigree as the son of Constitution. Chess's Dream has a Grade III win to his name in the Kitten's Joy in January. Excellent Timing was listed as a Probable for the Pat Day but has been entered on turf instead on the back of two straight dirt wins at Aqueduct.

Du Jour is a Bob Baffert trained three-year-old with two straight wins on turf at Santa Anita to his name. Brad Cox has joined in the fun adding Royal Prince to the field. He knows off the back of two wins at Fair Grounds and Sam Houston but seems one of the longer shots to break through at the top level. Dyn O Mite has appeared at the Del Mar Futurity, American Pharoah and Jeff Ruby. His top finish in those three has been fifth place. Not a big chance of him besting that on the Derby undercard.

Barrister Tom broke through by winning the Kentucky Downs Juvenile Stakes last July but has failed to impress since.

Hidden Enemy, Holy Vow, Lucky Law and Next round out of the field.

You can bet on the American Turf Stakes on the Kentucky Derby undercard with any of our betting partners via the Race Card below. Just click on the odds of the horse you'd like to back and then select which operator/sign-up bonus you'd like to use. You'll then be taken to their site to complete the sign-up process so you can place your bet on the race...