Commentary: An Open Letter to the New Mexico Racing Commission 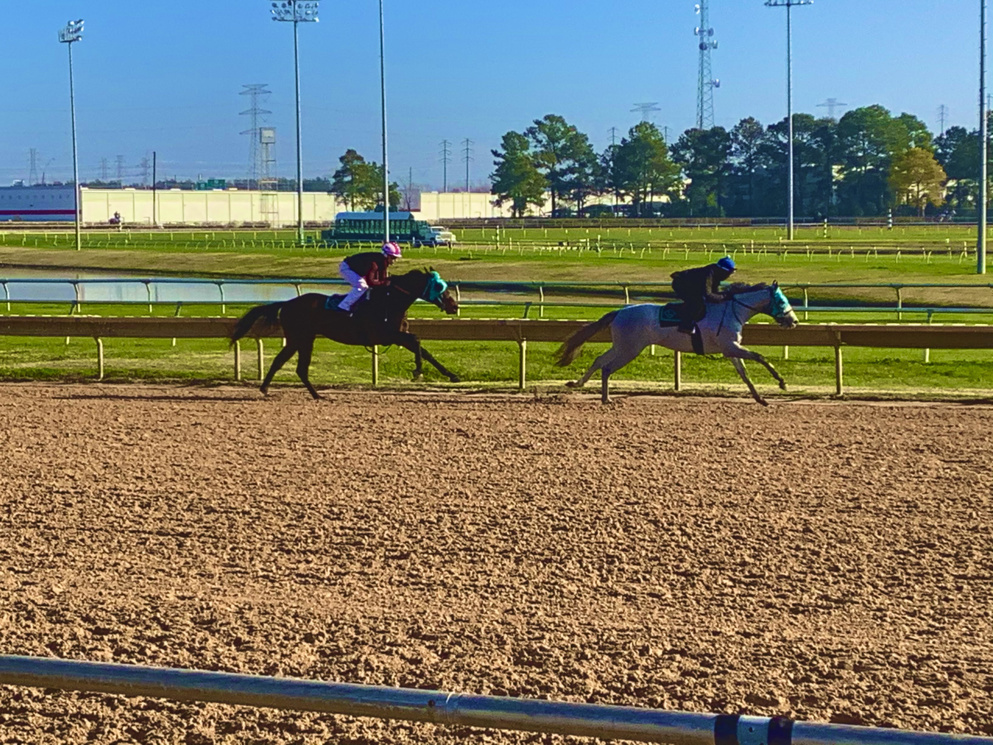 Derby Trail hopeful, Señor Buscador (seen left), from the barn of Todd Fincher works at Sam Houston Race Park with jockey Ty Kennedy aboard (.38 seconds 3F on 01/12/21). He is just one of the many Thoroughbreds who have fled the state seeking races outside of New Mexico. This Thursday the New Mexico Racing Commission holds its monthly meeting. J.N. Campbell submitted a position statement to the NMRC record (republished here).

Since early last year, New Mexico has by order of Governor Michelle Lujan Grisham, closed racetracks across the state because of what most would agree is "a public health crisis." Sunland Park, near the New Mexico-Texas line, cancelled the 2020 Sunland Derby. This is not only an important stop on the Kentucky Derby Trail, but has attached to it, contests that the very lifeblood of the Thoroughbred world in that part of the country.

The 2021 meeting is delayed, and at this point the running of that series probably will not take place. Over in Hobbs, New Mexico, Zia Park, which is attached to a casino attempted to run during the last part of the year, but was halted when COVID-19 cases skyrocketed. For Quarter Horses that run at Ruidoso Downs, their season is also in jeopardy as we head towards the late spring and early summer.

What is so perplexing about this situation is that other states across the nation, from New York to California, have re-opened tracks and succeeded at keeping people safe. A racetrack is no different than a Walmart. Isn't it? Social distancing actually might be more effective at the former than the latter when protocols are in place, especially when it comes to cleanliness. Thus, it appears politics and fear have come to dominate the world of racing in New Mexico, just as it has in other sectors. I am not saying that is unwarranted. However, the effects of these decisions, to remain closed, will have far-reaching ramifications on everything from breeding operations to the very livelihoods of those that make their living around horses that run.

To say that it will take years for this industry in New Mexico to recover is not an understatement. The loss of the Sunland Derby races has already forced trainers within the state to seek races elsewhere, which could in turn change the trajectory of home-bred operations.

Take Todd Fincher, for instance. He would normally be preparing his star, Señor Buscador, to run in the late March highlight of that series, but instead he was forced to move his whole operation to Sam Houston Race Park.

The loss of revenue for him, his staff, his clients, will be substantial. The pressure is mounting. Fincher has a large operation, but what about the smaller outfits that cannot afford to travel? How about the backstretch workers or exercise riders who rely on seasonal work to survive? The situation is reaching a critical juncture. How will the state respond?

In the spirit of what is paramount for this industry, in a state that does not always receive proper racing coverage by the media, you will find a copy of my statement of support. I sent this to the New Mexico Racing Commission to be read during the "Public Comments" portion of their monthly meeting that will be held this Thursday. If you are interested in listening to their proceedings, you can visit their website (http://nmrc.state.nm.us/) for the instructions to logon to their Zoom call.

RE: Public Comments, Statement from a Professional Turfwriter

That’s a Latin phrase from Lucretius' De Rerum Natura. It is the story of a thunderbolt whose momentum steadily builds like a temporal avalanche of energy. The phrase was a “motto” for New Mexico back in 1887, but it remains on the state seal to this day. Translated…“It grows as it goes.”

As a professional turfwriter who covers horse racing, my passion for this sport delves into my bones. I am also the grandson of those who lived and loved the Land of Enchantment. I pen this statement to you, New Mexico Racing Commission, with a heavy heart, but with conviction.

The stifling nature of COVID-19 has decimated hallmark trails like the Sunland Derby, driven trainers of impeccable character like Todd Fincher to other locales, and jeopardized the future of breeding operations that help families exist. Though New Mexico is not Kentucky, lacking a legacy of state investment in racing; still, it is the 3rd largest industry within. For now, its potential remains as an economic juggernaut, and like a Jicarilla Apache basket, an intricately woven part of New Mexican culture.

The industry is facing its darkest hour. The time is now for you to impress this upon the Governor like never before! Get the tracks and casinos open. Send those fine backstretch employees, trainers, jockeys, racing officials, and every person who is impacted by these closures, safely back to work.