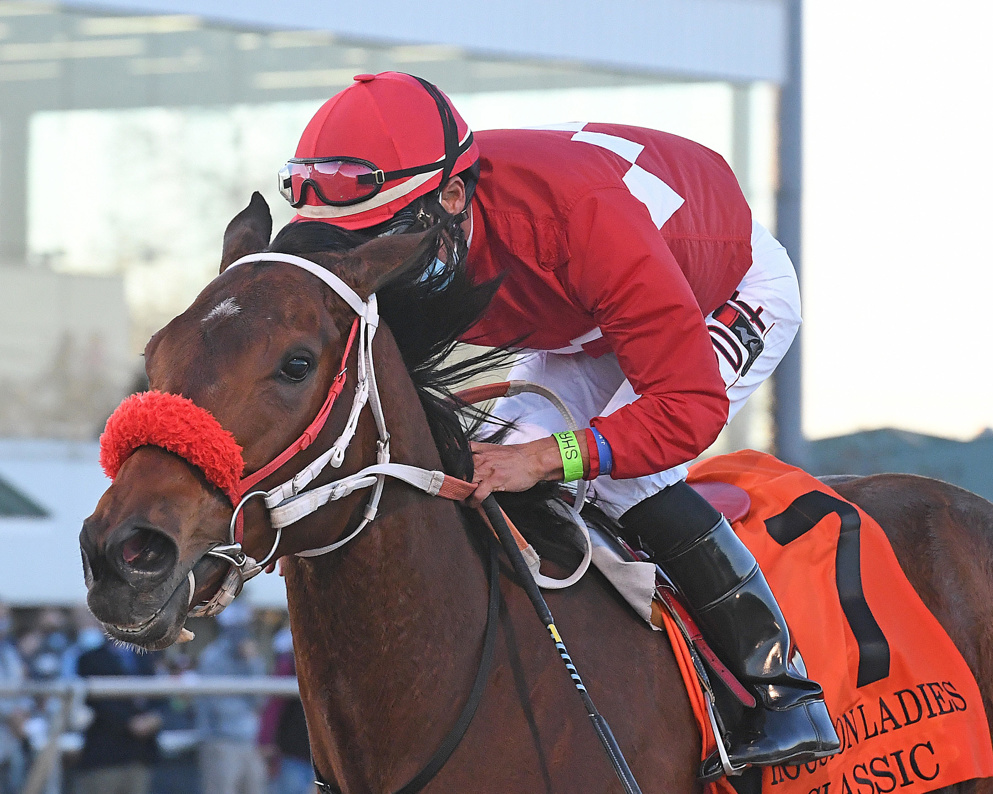 Letruska Wins! The Grade I Apple Blossom was billed as titanic matchup between BC Champ Monomoy Girl and Preakness Queen Swiss Skydiver. The result did not disappoint, see our race review below to find out who came out on top!

This one has been circled on a number of calendars across the sport of Thoroughbred racing, simply because everyone knew that there was a chance that we might have the opportunity to see Brad Cox's Monomoy Girl #6 once again square off with Kenny McPeek's Swiss Skydiver #2. Last time they met, in the Breeders' Cup Distaff (G1), the win went to Cox and his former connections. A week later, his runner would be sold, and it was unknown whether she would run again.

When the news came down that she would run again, onlookers were excited by the prospect. The dream of a rematch between the "Monomoy" and "Skydiver" became a reality when it was made known that the connections would be sending both into Saturday's Grade I Apple Blossom at Oaklawn Park. The race was billed as the "Race of the Year," and it did in no way disappoint. Coming into the contest, which traditionally has seen a rather large field, the favorite was going to be Cox's Monomoy Girl #6.

Now, owned by Spendthrift Farms and MyRacehorse, the ones who made the decision for her to race again, she is a seasoned veteran of high-class events. Florent Geroux rode her in the Grade III Bayakoa at Oaklawn, and she won easily in the slop. Her late gunning speed is her greatest asset, and she would need it against the likes of Swiss Skydiver #2, who has the ability to rate well, showcased that well back at the Preakness (G1) last October. Her power running style was again on display when she made her 2021 debut at Santa Anita in the Beholder Mile (G1).

We would do well to remember though going into this race that there were others drawn in here, including Fausto Gutierrez's Letruska #3. Her resume included a win at Sam Houston race Park in the Grade III Ladies Classic, and then followed it up with a 2nd place finish in the Azeri (G2) at Oaklawn. Her on-the-engine running style is a weapon, as long as she can get to the lead. Three others were also entered into this race, but most focused on these 3 previously mentioned.

Horseracing.net/us conducted our own Poll earlier in the week when we previewed the race, and most agreed (58%) that Monomoy Girl #6 would rule the day. A fair track and betting public that was avidly interested in watching this one, appeared ready for action, as Cox's greatest runner to date went off at 1/9!

At the break, Swiss Skydiver's #2 Robby Albarado tentatively toyed with the prospect of taking the lead. Quickly, Letruska #3, ridden by the aggressive Irad Ortiz, steadied his mount, then into the 1st-turn, shot to the lead. McPeek's entry dropped back, as Monomoy Girl #6, with regular rider Florent Geroux aboard, accelerated into attack position, and tracked the Gutierrez charge. The race was in full-swing down the backstretch.

For most of the way, Ortiz kept the pace fluid, and modulated things upfront in hopes of outlasting what he knew would be a late-running charge from the favorites. Quickly, Geroux tried to make a move into 2nd-turn by bringing his veteran mare up alongside the younger upstart. Albarado did all he could to put the Skydiver #2 along the rail, a place she clearly enjoys being, but steadily she dropped back as the lane unfolded.

With less than a furlong or so to go, Monomoy's #6 late gears were engaged, and it appeared that Ortiz's ride was low on gas. Cox and his legions of connections were once again going to be victorious . . . or were they? When you have a multiple Eclipse Award-winning jock on your horse, nothing is ever done until the wire arrives. With the riding crop firmly in hand, Ortiz urged his firecracker on, and with a head bob, she came back, securing the victory! Fausto Gutierrez could not have been happier.

It was a race for the ages, as Letruska #3 won, Monomoy Girl #6 was 2nd, and Swiss Skydiver #2 rounded out the minors, 3rd. Looking fired up in the post parade, it was her early foot that got Letruska #3 to the lead, but it was her grit and determination late, that helped her dethrone the favorites at odds of 3/1!

Stay tuned tomorrow for my recalibrated submission to the NTRA Poll for Thoroughbreds! You will not want to miss it!