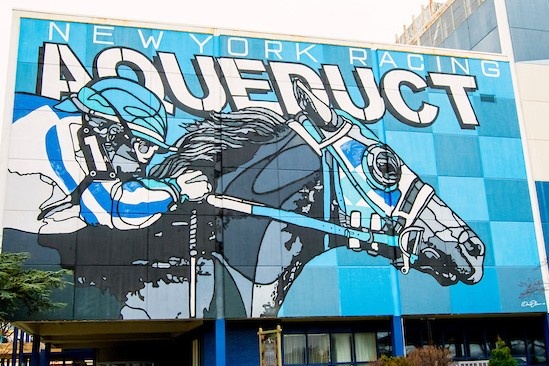 "The Big A" points towards the weekend with a great Friday ... turf racing is present, and we have free picks for you! Plus, some boxcar-priced long shots too!

Aqueduct Racetrack ... the Winter home of NYRA has its Spring Meet in high gear! Turf racing has returned, and although the weather does not always cooperate, wagering opportunities are numerous. Cruising into this Friday of racing, we have 9 races scheduled, so enjoy! With Belmont around the corner ... it will not be long now ...

In the Damon Runyon Stakes $100k last time, I sure did like the look of this Jorge Abreu runner by Practical Joke. Against a short field, and at fair odds of 5/1, the colt was 2nd best behind Rotknee. Dropping down to this state bred ALLW Co. race should be a cinch. The Parkland Thoroughbreds-owned sprinter has a couple of works to his credit since that “Non-G,” and I like his chances against what looks like a manageable field. The presence of jockey Dylan Davis in the saddle, only makes this one a surer bet … He should be able to rate close, snatching the victory with a furlong left.

As we go sprinting in this Starter Allowance … $55k is an enticing reason to enter … NYRA’s purse structure continues to set the pace. When it comes to a value play in this spot, I particularly like Ray Handal’s 5-yr-old gelding by City Zip. I know that he also has the other half of an uncoupled entry in Extreme #2 going for his barn ... However, I like the "other" one! The young trainer is getting aggressive with this runner because he is taking the plunge away from state bred company. Handal scratched him previously, in order to enter in this race. Regular man Jalon Samuel gets the call, and he is a budding talent within a strong jockey colony. Expect a good price on this “jumper,” as this conditioner should not be underestimated. Sometimes ... contrarian thinking, in a business like handicapping, can have major benefits ... monetarily ...

The main “turf event” on this Friday afternoon “Big A” card should have some intriguing options for bettors. After some rainfall on Thursday, expect the ground to be less than firm. The grass action so far has not yielded some definite trends as of yet, but what we do know is that controlling speed can win the day around 2-turns. Coming out of the chute, I am thinking that Chad Brown’s Microphone #7 will take some money … it’s Chad (he of course has an uncoupled entry in this race) … More so, this well-bred gelding by Siyouni (FR) is making his 3rd career start for Peter Brant. Though he missed a win last out at Gulfstream in an OC25kn1x, that doesn’t mean he cannot rebound nicely in this race. Manny Franco gets the call for the 1st time, and his mount should be able to take on this course. Speaking of horses connected to France, Graham Motion doesn’t have a French bred, but he does have a 4-yr-old that ran at Longchamp, Lyon, Saint Cloud, and Chantilly—appropriately named, Easter #5. It is always difficult to figure out how Euro imports will take to running in America. Are they here because they are “ringers” or is it because some owner “got taken?” Just a glance at this one’s class, he did run in the Poule d’Essai des Poulains (G1) against the likes of St Mark’s Basilica. Keeping that company can stay with a runner, but the 1st time gelding might “need a race.” I am going against both these excellent grass barns, and instead, will go with Todd Pletcher’s Conquer the World #2. A son of Curlin, this colt sold for the whopping price of $1.5 million at the Fasig-Tipton August ’19 Sale. In only 3 career starts, he ran on the turf at both Aqueduct and Belmont before his HOF trainer moved him to his winter base at Gulfstream. In an “off-track” distance test in mid-January, the colt finished well-back against OC35kn1x Co. Coming back to New York, I would expect him to fire against this group. Jose Lezcano gets the call, with regular rider Luis Saez over at Keeneland … Here is the suggested play!