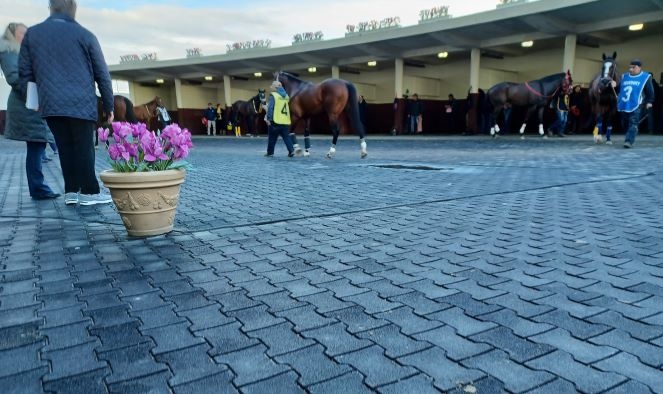 Aqueduct Racetrack only has a pair of days left, and then its '22 Spring Meet closes ... Check out the "featured" Woodhaven S. on the turf, as J.N. Campbell offers his thoughts on the stakes action!

NYRA spends more time at Aqueduct Racetrack than any other location out of the three. That includes Belmont Park ... Its Spring Meet is almost over ... moving towards the wire! Cruising into this final weekend of racing, we have 10 on the schedule, so enjoy! With Belmont just around the corner ... it will not be long now ...

Against a heavy favorite, who was overmatched in the Wood Memorial (G2), I like Richard Schosberg’s gelding by Union Jackson as an alternative. With early speed, he has the power to get to the lead, even though he is drawn towards the rail. This runner only has 4 races under his belt, and even though he has lost leads in “Non-G” races in December and January, I think a rebound is possible. Manny Franco has the call once again, and he knows this one backward and forward. Watch this one off-the-shelf … speed can be a powerful weapon. Get to the lead!

HOF trainer Mark Casse has this gelding by Twirling Candy headed back to the AQU turf with intent. The now, 4-yr-old has a resume that speaks to running in state bred ALLW Co. Owned by DJ Stable, I think he is ready to fire off-the-bench. With some good works under him, the best news is he gets the weight relief with Jose Gomez, and his aggressive piloting skills. A colt like this one can take a significant leap in maturity over the course of the layoff … let’s go!

There are only 7 runners in this year’s edition of the Woodhaven, but it is full of some nice quality. Trainer Chad Brown always comes to NYRA with a powerful string, and when a Klaravich-owned entry comes calling … everyone should be wary. The last time we saw Unanimous Consent #6 it was down at Tampa in an OC75kn1x. He overmatched that field rather easily, which makes me wonder just how good this one is? Manny Franco is a fairly average lawn jockey, and I would not take 2/1 or lower on the tote. I am much more interested in betting the pair of alums from the Columbia S. $75k @TAM. Between Christophe Clement’s Heaven Street #1 and Shug McGaughey’s Fort Washington #4, the former will probably end up being the shortest price on the tote, but I am keen to back the latter. By War Front, this distance is perfect for this well-bred turfer, and Jose Lezcano rode this colt at both AQU and BEL last fall. Let’s “key” Shug’s talented entry, and also use Todd Pletcher’s son of Speightstown, Chanceux #3 … along with the Clement and Brown horses. This is going to be a solid turf race, and if we have played it properly, then the cash prize will be ours.

Opt-in deposit $50 or more on a Monday and Tuesday through to October 25, T&Cs apply.