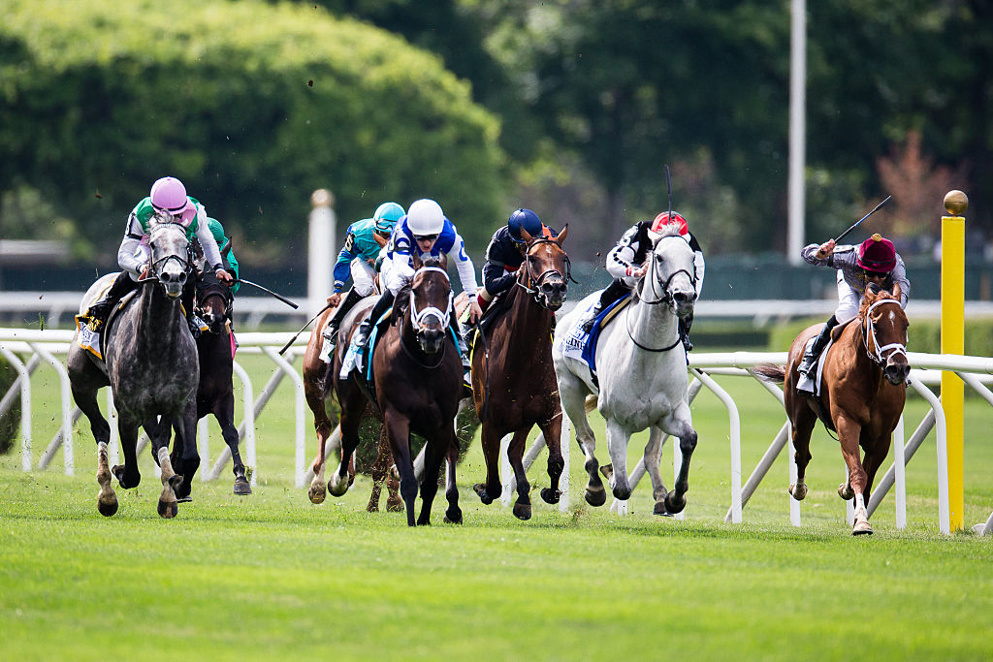 The Joe Hirsch Classic takes center stage on the Belmont turf ... check out this All-Stakes Pick 3 ticket below!

A Saturday full of stakes action ... Belmont Park and their September-October Meet have their condition book ready for you retail horseplayer! This 11-race card is sure to be a challenging one for even the most-seasoned handicappers.

At Horseracing.net/us we have you covered, including a Pick 3 that should be a great wagering opportunity! It is a good time for some of the best that North American racing has to offer. Stay tuned!

The initial race in this P3 All-Stakes sequence is a 6F afterburner festival that offers the winner passage into the Breeders’ Cup Dirt Sprint (G1) at Del Mar. So, much is at “stake.” Out of these 5, it looks like Bill Mott’s Baby Yoda #3 and Kelly Breen’s Firenze Fire #4 are set to do battle down the lane. Both are going to be short prices in the end, but frankly “The Force” is telling me that I should be partial to Breen’s charge. This 6-yr-old is particularly seasoned at NYRA courses—especially Belmont. In 11 tries at Big Sandy, the son of Poseidon’s Warrior has 7 wins … an impressive tally. After a 2nd in the Forego (G1) last time at Saratoga, he should be fit as a fiddle. Once again, Irad Ortiz gets aboard, and he should be able to get this one home in short order. A “Single” all the way …

Taking to the Inner Turf, this race, the Matron, is a tough G3 contest. What makes this so difficult is the fact that these young freshmen have little in the way of experience. With 12 drawn in here, it will make it difficult to discern who is ready and who still needs time to develop.

I am partial to another Irad Ortiz mount, who looks promising. Trainer Brad Cox had a solid Saratoga Meet, and sends Bubble Rock #7, a Shortleaf homebred, back into the NYRA fray. The filly by More Than Ready was game last time on the grass, winning by over 3 lengths. She seems logical once again. Another entry that is one who could score in this tough spot is Wesley Ward’s Chi Town Lady #8. She was impressive in the Bolton Landing $120k, exhibiting some nice turn-of-foot in the stretch. That could come into use, as Joel Rosario takes the mount.

Trusting either of these runners to get the job done seems like a poor decision. What I am really hoping for is that a long shot, like Mike Trombeta’s Dufresne #5, will pull the upset … thus ratcheting up the payout. Maybe we will have some fortune that heads in our direction. That would be nice … The “All” button appears to be the best decision considering the circumstances. We can afford it, especially since I have a “Single” coming in the finale.

This final stretch of the All-Stakes P3 is a celebrated race in that it will have a heavy favorite up against the rest. Christophe Clement’s Gufo #3 seems to have finally lived up to his expectations which were established last year at Belmont in their “Derby” (G1). By Declaration of War, this colt seems poised to notch his 3rd win in-a-row as Joel Rosario once again climbs aboard.

What is niggling at me, is the fact that I am not sure if this colt is such a lock to win. In actuality, I am firmly against this runner. Back in the Sword Dancer (G1) at Saratoga, he easily could have lost to Aidan O’Brien’s Japan #7 or Mike Maker’s Cross Border #5. That makes me think going with another option might be best. Plus, if I can find a higher price, then all the better. I am more than just a little interested in Chad Brown’s Rockemperor #4 by Holy Roman Emperor (IRE). The 5-yr-old already has 6 attempts at Belmont, and not too shabby a record at 1/1/2.

I like the addition of Javier Castellano, and he still has the ability to make crucial decisions at key points in a turf race. I think overall that this runner is way overdue for a “signature” win. If his rider can keep him rated “just off,” then the possibility exists for a nice score. At odds on the tote that could be double-digit in nature ... that sounds like a plan to me. I believe in Rockemperor #4, and who doesn’t think Brown has a shot in a grass race at a NYRA course? Sounds like a great way to cap off this ticket!