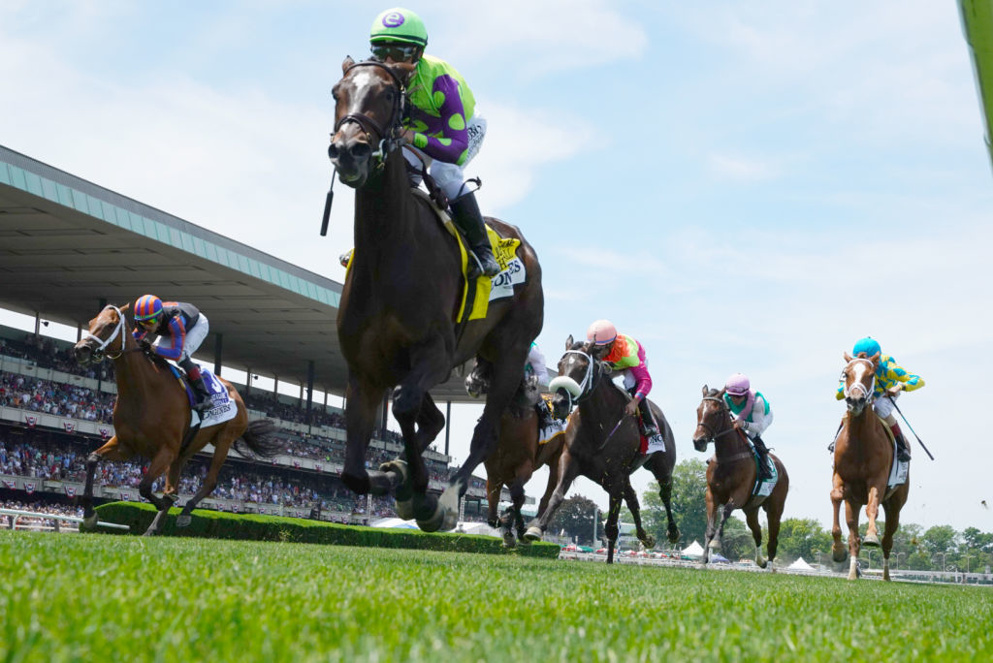 A Saturday at Belmont ... nothing better, especially when we have some major turf racing afoot. Check out these selections and expert analysis below.

NYRA's Belmont Park is back in action! Their September-October Meet is all-set, and with a variety of conditions, it will present some difficult handicapping puzzles..

We at Horseracing.net/us have you covered every step of the way. With Breeders' Cup implications on the table, plus a bevy of other stakes action, it is a good time for some of the best that North American racing has to offer.

Today, we will conclude both the male and female versions of the "Turf Triple, " as the $700k Jockey Club Oaks Invitational and the $1 Million Jockey Club Derby Invitational will anchor the Saturday card. It should be a grass racer's dream! Join us as we construct a Late Pick 4 ticket that includes both ...

Beginning this tough sequence, we find ourselves in the middle of a dirt sprint at the ALLW Co. level. With a pair of major turf stakes races just beyond this one, we want to get there, in order to have the chance to exercise some strong opinions. Looking over this field, I want to steer clear of any 3-yr-old fillies. They have less, if not any, experience against older runners, and that puts them at a distinct disadvantage. Thus, I am willing to spurn Pretty Clever #1, Esotica #2, Lot of Honey #4, Out First #5, Handle the Truth #8, and She’s Dancing #9 … they are light when it comes to racing.

Instead, I like the look of Dylan Davis’ mount. The 5-yr-old mare Ok Honey #6 is ready to breakthrough after 3 … count’em … 3, 4th place finishes, all at NYRA tracks. Greg DiPrima doesn’t have an expansive stable, but that doesn’t mean that this one cannot improve here. Davis is an able jockey, and I like the 10/1 M/L price. Let’s include her in the slate of picks, but also give ourselves some backup with sure-shots like Beautiful Karen #3 and Snicket #10, as well as, a boxcar-priced runner like Vienna Code #7. That should do it …

The last leg of the “Turf Triple” for female runners that are 3-yr-olds is this race, the JC Oaks Invite. You either got something in the mail, or you did not. Of these, I especially like the look of one of Chad Brown’s entries. Shantisara #6 arrived in the U.S. after a tough provincial schedule in France. Brown got ahold of this daughter of Coulsty (IRE), and promptly worked her into first, some “Non-G” Co. at Monmouth, then into the Pucker Up (G3) on the “Mr. D-Arlington Million” undercard. That last effort on the turf was superb, and she scored nicely under the guidance of Flavien Prat. Michael Dubb and Madaket Stables make for an impressive ownership team, and Brown has this one headed in the proper direction. I think this one has major ability, and I am willing to single her based on her graduating “test” scores. In fact, I am so confident in her abilities, and those of her jockey (Prat returns btw), that I think she is a definite “Single.” Sure, his other half of the “uncoupled” entry looks formidable in Higher Truth #2, but I am sticking with the one on the make. It is a gutsy call (also overlooking Charlie Appleby’s Creative Flair #1 might be playing with fire), but that is how to keep a “caveman” ticket from taking all of your bankroll. Onward …

Moving right along, we are heading into a Breeders’ Cup Challenge Series contest that feeds into the Turf (G1), a celebrated race that always goes off right before the Classic (G1). This year’s edition of the JC Derby brings together an interesting mix of 3-yr-old colts. The celebrity among them is the Aidan O’Brien runner, Bolshoi Ballet #8. Named for one of the oldest ballet companies in the world (est. 1776), this entry was excellent in his U.S. debut, when he won the 1st Leg of the male version of the “Turf Triple.” Guided by international superstar jockey Ryan Moore, he closed hard, and won the day on this very course at Belmont. When he shipped up to Saratoga for the Derby (2nd Leg), it was a foregone conclusion that this son of Galileo (IRE) would end up being the “deserving favorite.” The long and the short of it is that the colt did not fire when asked. In hindsight, you could interpret that effort as one that just needs the proverbial line drawn, or you can think of it as an issue that might come up again … as in today. I will exercise caution … let’s use O’Brien’s well-bred charge, but also look at a couple of others to round out this stage.

Charlie Appleby has an entry that looks to be built well for a race like this one. If Yibir #2 can ship nicely, then the gelding out of super-sire Dubawi (IRE) is going to be tough when it counts the most. Looking back on his last race at York, the Group 2 Great Voltigeur S., James Doyle shot through when the opportunity came, winning convincingly by over a length. Jamie Spencer takes over the riding duties, donning the distinctive “blue,” and he is going to try and check Moore’s mount. This should be a thrilling wire finish. As for one more that warrants consideration … I would not count out the training ability of Satoshi Kobayashi. This is a conditioner with great ability, especially when it comes to running outside of Japan. His 3-yr-old colt, Tokyo Gold #3 was game in the Belmont Derby against O’Brien’s eventual winner. Rally from behind, John Velazquez did his best to try and wrestle the lead away from Moore. It wasn’t to be, but it showed heart in the “Place.” If the veteran rider can take a position at the top of the lane that allows him to get loose, he might have the gears to make a difference in the end. Let’s use all 3 of these runners, as we watch a European invasion once again.

The capstone to this Saturday P4 that will come late in the day, is this tough sprint for males both older and younger. Once again, we are faced with some young upstart 3-yr-olds who might be facing older runners for the 1st time in their careers. Unlike the opening leg, I want to include them “All” since this is a large field, and trusting some of the supposed “more experienced” entries might fail us. If we make it this far, and I think we will, then we want to have all of our bases covered just in case a long shot barrels home for the score. I hope that happens …

As for a top selection, I think I fancy Brittany Russell’s Great Humor #5. The gelding is going to be a double-digit price, and these Distorted Humor-types are pretty nice when it comes to sprinting on the dirt. Russell is a trainer who deserves to be on the big stage, and one day, I hope she saddles mounts regularly in Grade 1 events. As for this barnmember, the up in class is not necessarily a concern because he exhibited some talent in his last race at Saratoga, an MC40k event. The keeping of Luis Saez is a pro, as is the fact that this one’s style is mainly on the frontend. If the top jock can get him to the lead, I am hoping the colt will do the rest. It should be a rousing good time for the finale. What a price this one would be …