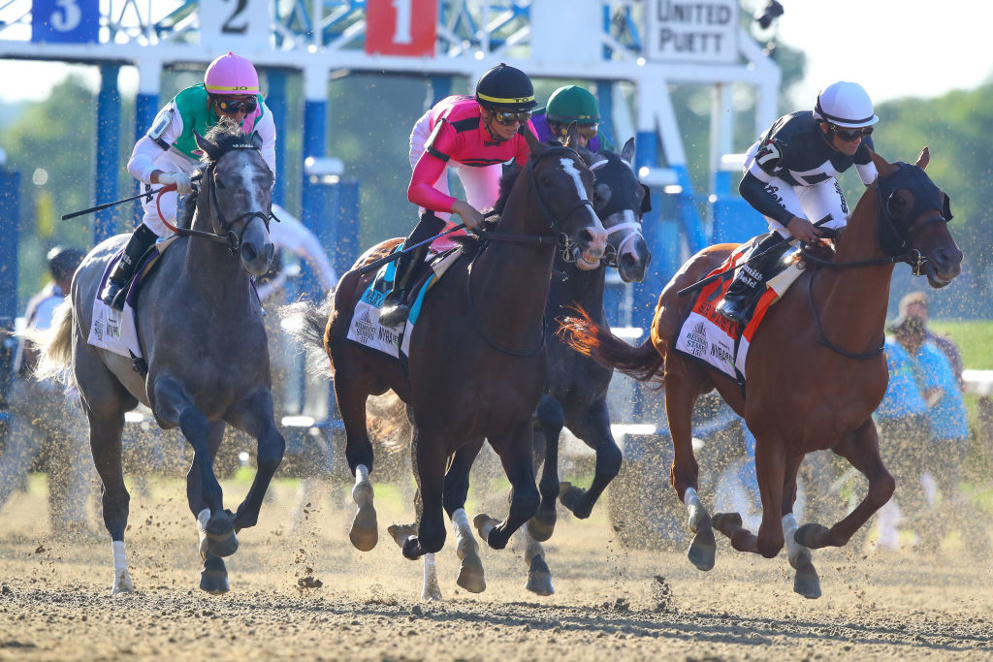 Five graded stakes highlight a terrific day of racing at Belmont Park on Saturday, with the G1 Man O' War for older turf horses taking top billing. Our in-house handicapper has all the action covered, with picks for every race and detailed analysis of all the graded stakes.

The G3 Runhappy appears to be a two-horse race between Chateau (#3) and Firenze Fire (#5), though in my mind this event is squarely in the latter’s court. Trainer Rob Atras has Chateau in raging form, and he ran better than it may seem last out in the G1 Carter at Aqueduct considering he wants no part of seven furlongs, but Firenze is simply a monster at Belmont. Nearly all of his best races have come on this track, over which he’s 5-for-8 in his career, and after his career momentarily appeared to hang in the balance at the onset of 2020 he put together a strong campaign. He should still have plenty left in the tank as a 6-year-old, and I think he’s going to have no trouble reeling in the speedy Chateau to kick off the day’s graded stakes action.

The return of Harvey’s Lil Goil (#1), a G1 winner and the surprise third-place finisher from last year’s G1 Breeders’ Cup Filly & Mare Turf, highlights the G3 Beaugay. Obviously if this filly were to get back to the 102 Beyer Speed Figure she earned in the 2020 Filly & Mare Turf there’d be no beating her, but I’m skeptical she’ll be able to do that as she makes her seasonal debut at a distance likely shorter than her best.

I have even less confidence that the fifth-place finisher from the Filly & Mare Turf, Civil Union (#5), will be effective at this middle distance as she makes her first start of the year. Harvey’s Lil Goil has at least shown a little versatility in her career, while Civil Union seems much better suited to longer distances, and indeed this is likely just a prep for the G2 New York on the week of the Belmont Stakes.

I’m under no illusions that these two aren’t the best turf runners in this field, however it does feel like a spot in which they could be a bit vulnerable, which is why my top pick is the Chad Brown-trained Lemista (#2). I’m not too thrilled with this filly’s overseas form, but she does have a bit of tactical speed and could move way forward in this country for Brown, as she gets to run on firm ground for the first time in her career and adds Lasix. It’s also worth noting that Irad Ortiz, Jr., who was aboard Lemista’s stablemate Nay Lady Nay (#3) in her last two starts, opts to ride this half of the uncoupled Brown entry despite Lemista ostensibly being the weaker half. Ultimately, I think this filly is meeting the right kind of group here and I’m expecting a career-best effort out of her.

The G3 Vagrancy is another race in which I’m not going to get too cute. I suppose Pacific Gale (#6) isn’t the most reliable since she has a tendency to go off form for long stretches of time, but given her last two wins at Gulfstream Park this isn’t one of those times. At her best, which I believe she is right now, Pacific Gale is a quality dirt sprinter that fits very well at this level of competition. She’s not going to be a big price, but I do believe she’s a very likely winner.

The main danger to the favorite appears to be French Empire (#7), who makes her first start with trainer Brad Cox after being privately purchased at the Oaklawn meet, during which she won a pair of allowance races very impressively that netted her Beyer Speed Figures in the low 90’s. For those thinking that she’s set for even better in the barn of Cox, consider that her previous trainer Cipriano Contreras was absolutely on fire at Oaklawn, and that this mare must run without Lasix in this spot.

I’m expecting some regression from French Empire, which is why my preferred backup is the salty Honor Way (#5). While perhaps not as talented as Pacific Gale, Honor Way is a super honest sprinter who’s taken her game to another level lately for trainer Charlie Baker. She should yet again run her race in the Vagrancy, though I don’t think she’s a match for the good version of Pacific Gale.

The defection of Risk Taking, who will instead run in the G1 Preakness next Saturday, has left the G3 Peter Pan with no clear favorite, though I suspect Promise Keeper (#3) will inherit that role following an authoritative win last out at Keeneland. Even on its face that effort makes him a major player here, and there’s reason to believe that the Beyer Speed Figure he earned could’ve been even higher, especially after an also-ran came back to win at Churchill Downs earlier this week with an improved figure. If he runs back to that race he’s going to be very tough to beat, however I’m not banking on him replicating that performance given his atrocious performance in the G2 Tampa Bay Derby without Lasix, which he again won’t have the benefit of in this spot.

I actually prefer the other Todd Pletcher-trained horse Overtook (#1). He has the feel of a plodder, which was on display in his last race, the G3 Withers at Aqueduct, in which he lagged behind the field early and made a belated run to get second, but he’s improved with nearly every start and should appreciate the one-turn configuration of the Peter Pan, with its expansive stretch run. Given his steady progression, I think it’s fair to expect him to take another step forward on Saturday, and it wouldn’t take much improvement, if any, to put him in the winner’s circle.

The other horse I would strongly consider using in the Peter Pan is Wolfie’s Dynaghost (#4). Despite beating graded-stakes winner Weyburn in his debut, that race probably isn’t as fast as it appears on paper, however it’s a noteworthy performance considering his trainer Tom Albertrani rarely wins with first-time starters. It was also an encouraging effort given his pedigree, which suggests that he wants significantly more ground than seven furlongs, and I’m also anticipating improvement out of him in the Peter Pan.

The other stakes on the program are a little disappointing when it comes to wagering, but thankfully the G1 Man O’ War is here to pick up the slack. I suppose many are going to concede this race to the Coolmore shipper Sovereign (#1), who makes his first North American start with trainer Chad Brown, however I don’t see this horse as any kind of cinch. His Euro form might look imposing at first blush, but when you dig a little deeper I don’t think it’s anything special considering his best performance to date came in a three-horse Group 1 at Ascot last year in which he was no match for Enable. In fact, the overseas form of Ziyad (#3) is probably even better than Sovereign’s, and Ziyad really hasn’t accomplished anything of note in this country. Sovereign can certainly win this race, but he’s going to be an underlay.

The main alternative to the favorite, at least in the minds of the betting public, is Gufo (#8). I’ve long had an affinity for this horse and I do believe he’s a contender as he makes his 4-year-old debut in this spot. Gufo isn’t the flashiest on paper, but he’s a reliable closer who just seems to have a nose for the wire. He also proved last year with a win in the G1 Belmont Derby that he can be effective at longer distances, so I don’t see the mile and three-eighths he gets in this spot as a concern. If I have any misgivings about him in this race it’s that his closing style could leave him vulnerable given the fact that marathon turf races on the NYRA circuit so often feature glacial paces, and it’s also possible he isn’t fully cranked for his first start of the year.

With Sovereign and Gufo appearing beatable, I’ve turned my attention in the Man O’ War to the higher-priced Field Pass (#7). He may look questionable at this distance, but his trainer Mike Maker is one of the best in the game when it comes to stretching horses out, particularly those that look out of their depth in marathons, and Field Pass just made a very encouraging return to the races in the G1 Maker’s Mark Mile at Keeneland. He did get a good trip in that spot, however it was a vastly improved performance over his 3-year-old form, and one that should set him up nicely going forward. He has the early speed to take advantage of a soft pace should it materialize and I’m expecting him to run the race of his life here.