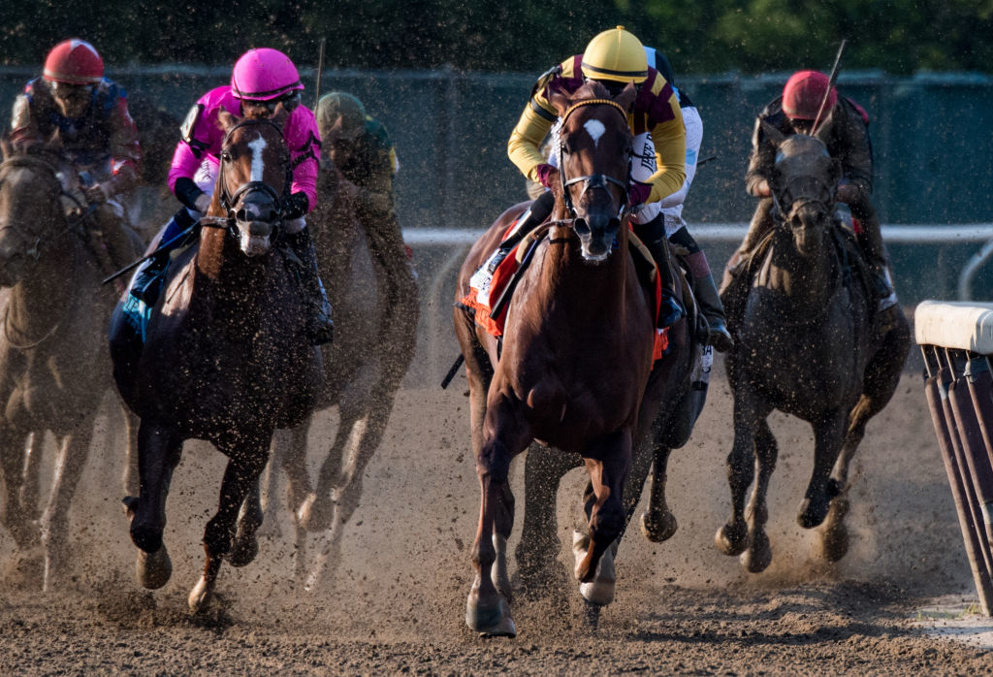 Opt-in & Saturdays through October 29, get a refund on your first bet on the Late Pick 4 up to $25 when your ticket has winners in 3 legs and loses in only 1. T&Cs apply.

With the NYRA Racing Festival complete, and Todd Pletcher's 1-2 score in Belmont Stakes now in the record books, it is time to turn our attention to the rest of the Meet. That runs through mid-July, which will in-turn, give way to celebrated Saratoga. There is much left to do in Elmont ... so, tune in!

Tracy Farmer owns this filly by Twirling Candy, and she is once again taking to the grass against state bred company. This will be her 3rd start off-the-bench for trainer Mark Casse, and she just missed by a whisker at Belmont at the end of last month. Seasoned jockey Trevor McCarthy will be in the irons, and he clearly understands this one’s tendencies. The price should be pretty square at 7/2 or thereabouts.

Tom Morley is a strong NYRA conditioner with a good group of runners to his credit. He has an uncoupled entry in this spot, but I actually prefer the one that is better odds … 8/1. Dylan Davis will be aboard, and I am thinking his mount is going to be much better than his last couple of races have shown. If you watch those efforts, he was compromised by all sorts of issues that arose. This race is an opportunity … Let’s wager and watch …

The signature “Mother Goose” brings together some sharp young fillies that will be going around 1-turn. Running through the card for this 5-horse field, it is readily apparent that Brad Cox’s Juju’s Map #5 is probably the “deserving favorite.” That statement is based on a two-fold point … first, she is an alum of the BC Juvenile Fillies (G1), and second, since her 2022 debut at Churchill Downs was such a rousing success … winning by 4+ lengths with Florent Geroux in the irons. A daughter of Liam’s Map, she figures to be prominent as the season develops. With her regular jockey flying to New York to ride her, I have no doubts that Cox will have her ready to fire. However, I am unwilling to accept such low odds on the tote. Instead, I much prefer Chad Brown’s Gerrymander #4, a well-bred daughter of Into Mischief that deserves another crack at this kind of competition. On the Oaks Day undercard in the Eight Belles (G2), she was no match for Cox’s ace, Matareya. Maybe it was the poor start? Klaravich Stables paid a pretty penny for this one, and I am sure that Seth, and Chad for that matter, expect a much better result this time around. The reigning Eclipse Award-winning jockey, Joel Rosario, retains the mount. Based on her form from last year as a 2-yr-old, she needs to break well, and control the fractions up front. If she can do that, then we might be looking at an upset. One other entry that piques my interest is Todd Pletcher’s Shahama #1. A former Dubai stalwart, she came to Pletcher’s camp for the KYOaks at Churchill in early May. She was never going to be able to match Secret Oath or Nest, but that doesn’t mean she doesn’t have the talent to rise to the occasion in this Grade 2. Flavien Prat took her for a spin under the Twin Spires, and he returns once again in this spot. What a race this could turn out to be!