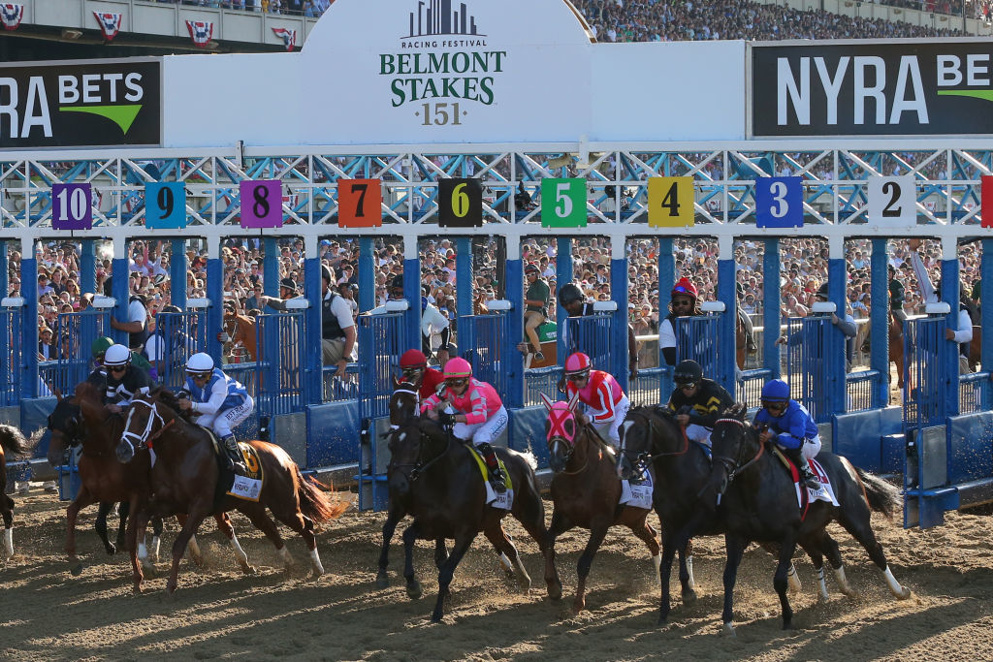 Beautiful Belmont Park is the scene for Saturday's Woodward Stakes, which highlights a fabulous card ... Check out these selections along with Late Pick 4 analysis ...

This Saturday at Belmont Park, NYRA's September-October Meet takes center stage as they have a jam-packed stakes schedule on the docket.

Included are both the Champagne S. (G1) for 2-yr-old males, and the Woodward S. (G1) for older runners. The former is a Breeders' Cup "Win and You're In" contest for entry into the BC Juvenile (G1) @DMR in November, plus it includes Kentucky Derby Points (10-4-2-1) for the lucky winner. As for the latter, it is a mainstay on the schedule, and always provides a thrilling contest going 1 1/8th around 1-turn.

This Late Pick 4 line-up is sure to be a tough one to crack for even the veteran handicapper. At Horseracing.net/us we have you covered, including all of the other stakes action! It is a good time for some of the best that North American racing has to offer. Stay tuned!

Leading off the late action on Saturday is a race of some note, which is sure to test these young freshmen. On the line is a trip to the Breeders’ Cup Juvenile (G1) to be held at Del Mar on Friday, November 5th. Also, there are Kentucky Derby Points at stake (10-4-2-1), which will be essential when that race is drawn in late April 2022. Part of the NYRA Triple for 2-yr-olds (the others are Saratoga Spcl./Hopeful), there is only one of the 2 former winners drawn into this race—Steve Asmussen’s Gunite #5.

The Gun Runner colt surprised most in the Hopeful S. (G1) at odds of 12/1. Jockey Ricardo Santana Jr. took over the lead along the backstretch, and never looked back. Enroute to a 5+ length victory, the Winchell homebred celebrated a nice win over the short-priced Wit #1 from the barn of Todd Pletcher. The pair will do battle once again, as Irad Ortiz looks to get mount back on track. By Practical Joke, a sire on the rise, many think he can bounce back … necessitating the obvious query of, was the Asmussen runner’s win a fluke. I am not so sure … If pace makes the race, then clearly Pletcher’s entry needs quite a bit to run into, in order to use that powerful set of late gears that he possesses. He got some of that at Saratoga, but Winchell’s own was just too good. The Gun Runner offspring has the capability to build on that Saturday. My top selection …

Some other competitors out of this field of 6 that will take money include Pletcher’s other accomplished colt, My Prankster #2. The Into Mischief budding star really sparked the bettors with a convincing score on debut at Saratoga in the latter half of August. Luis Saez has the opportunity to help this one soar to even greater heights, but it will not be an easy chore considering the field that he will face at Belmont … a much tougher go. One other that warrants consideration is Chad Brown’s Jack Christopher #3. Like the aforementioned colt, this one exhibited some real strength down the lane, on his way to an 8+ length victory. By Munnings, this well-connected runner will hope to extend to the mile distance, and if he can, with Jose Ortiz aboard, then he could be looking at a victory. Hard to say with so little experience though … will there be a regression? Unknown …

For my money, I am sticking with Gunite #5 at a solid price of 4/1 on the M/L. Even though he is sure to come down from there, he still remains an overlay at anything above 2/1, in my estimation.

After a nice-looking “Single” in the 1st Leg, it is time to turn our attention to the Inner Turf Course. If rain does not force this “off,” then that is where we will find a Grade 3 sprint that is going to be a fun one to handicap. The Ribaudo Barn has the well-bred turfer by Speightstown ready for action after Pulsate #7 won the Lucky Coin 120k by a neck over Backtohisroots #2 and Guildsman #6. Manny Franco will serve as pilot once again, and if he can put his mount into the proper position, then he might be able to win the day. If he does, it would be his 1st score at Belmont in 5 tries. Hmm … that sounds dubious at best …

Let’s include him, but when it comes to a top selection, I am more interested in Bill Mott’s Chewing Gum #9. There is much to like about this son of Candy Ride (ARG). The 6-yr-old has Belmont experience, and though he has had a time of it at Saratoga in the Troy (G3) and in the Turf Sprint (G3) at Kentucky Downs, there is no reason to think he is going to throw in the towel here. He has a fine class rating, and during the early Summer Meet in Elmont, he was 2nd in a couple of tough races. I like the price at 8/1, and Eric Cancel can be a suitable guide. He easily has the fitness level built up …

As for a couple of others to round out the ticket, I have more than just a passing interest in Wesley Ward’s Arrest Me Red #3, Christophe Clement’s Therapist #5 and Frank Russo’s Belgrano #8. Each of these either come from strong barns or are bred to run in spots like these … or both. That should provide us coverage, since anything can happen.

This year’s Woodward S. came up with a short field of 6, but there is quality to be found in here. Certainly, handicappers will make a case for Dr Post #1, Art Collector #3, Code of Honor #5, and Forza Di Oro #6. Each has has qualities that are inviting, and there is little doubt that their class rankings are quite high. To my eye though, and many will of course agree, that Godolphin’s own Maxfield #2 is head-and-shoulders above the rest. I have purposely kept this 4-yr-old colt out of my NTRA Top Ten Poll because I have argued that he has faced minimal competition at Churchill, and when he did have the chance to rival Brad Cox’s Knicks Go, he missed. Now, in order to cement his plans for the BC Classic (G1), he needs to make a statement at Belmont in this Grade 1. It is time to show everyone, including this turfwriter, that he is made of sterner stuff. Brendan Walsh has an excellent reputation, so he should have the best in his barn ready for action with that powerful late kick he owns. After serving as this son of Street Sense’s jockey for the past 3 races, Jose Ortiz knows precisely what he needs to do. This is “Max’s” time to shine … a must win in my book. Plus, he is a “Single” on my LP4 ticket.

It would not be a Late Pick 4 sequence in North America without a ridiculously difficult final leg. We find ourselves in the middle of a MC turf sprint of epic proportions. What I would do in most of these situations is hit the “All” button. It just makes the most sense, if you can afford it. When it comes to a “winner,” I think Tom Morley’s new charge is the one to back. Rogue Leader #8 is my top choice. Not only is the gelding named after a certain wing of a rebellion “far, far away,” but also more so because he is owned by the folks at Pocket Aces Racing. They have excellent leadership, and the former Jorge Abreu runner at least has some turf “experience.” He clipped heels in that last Belmont try, and had that not happened, then maybe it would have turned out differently. Kendrick Carmouche is riding with some confidence, and his ability is growing when it comes to lawn jockeying. Laoban is not typically a sire that is known for producing grass heirs, Uncle Mo … his sire … sure is. Let’s put him on top …