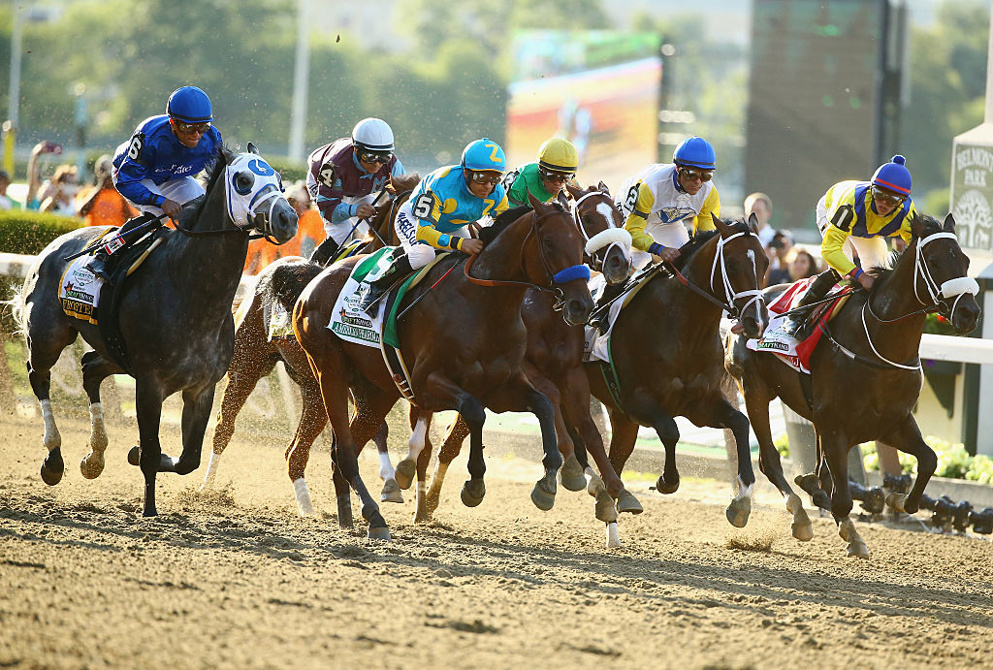 The turf races could be in jeopardy on Thursday at Belmont Park due to rain in the forecast, but the Belmont Stakes Racing Festival gets off to a roaring start nonetheless with a nine-race card led by a pair of G3 turf events. As usual, our in-house handicapper has you covered with picks for the whole card, as well as additional analysis of the Late Pick 4, which includes three stakes races.

For the purposes of this analysis, I’m going to assume the two graded stakes races on turf are going to remain on their intended surface. With a good amount of rain in the forecast for Thursday, that likely means soft conditions for the G3 Intercontinental, which should play right into the hand of the favorite Regal Glory (#8). Under nearly identical conditions last year, Regal Glory finished second in this race behind her very talented stablemate Newspaperofrecord, and a repeat of that effort would obviously make her tough to beat. Furthermore, Regal Glory’s 2021 debut in the Plenty of Grace was rock solid, and she has a sparkling record in races run on softer turf. She probably doesn’t need any kind of added advantage to beat this field, but the ground should give her a big edge.

A yielding course is the primary reason I have Regal Glory as a clear selection over Sweet Bye and Bye (#2). Now in the barn of Saffie Joseph, Jr., Sweet Bye and Bye just keeps running good races, and this distance and class level strikes me as the perfect fit for her. Joseph’s performance on the NYRA circuit is also reason to be bullish about her chances, but the big negative I see is that she’s unproven on this kind of ground. I think she’s definitely talented enough to win, however this probably isn’t the right circumstance for her.

Change of Control (#4) does like some cut in the ground and has been running some big races lately in Kentucky, but I’m not sure she’s going to appreciate stretching out to seven furlongs and historically she’s been at her best at Churchill Downs and Keeneland. I’m expecting some regression from her here, though she’s not without a chance.

I’m not saying anything that isn’t immediately evident on paper, but how does Happy Soul (#4) lose this race? She is going to be an enormous favorite, so you can kiss any semblance of value goodbye, but if she runs back to her last race, an 11 ¾-length romp over this track that earned her an 81 Beyer Speed Figure, she’d be pretty much invincible. Perhaps a reason to be skeptical is that her debut at Keeneland was rather underwhelming, however I think it’s far more likely we see something more in line with her last start as opposed to her first.

Another reason Happy Soul is such a lead-pipe cinch (at least on paper) is that there is virtually nothing standing in her way. That lack of competition could become even more stark if Mainstay (#2), a half to last year’s champion 2-year-old filly Vequist, opts to run on Friday at Monmouth Park instead. Mainstay appears to be working well at Parx Racing and it could have an outside shot at upsetting the favorite, but even if she runs she’s probably going to have to be better than Vequist to topple Happy Soul.

I’m really hoping the G3 Wonder Again stays on the turf, because this was a pretty fun race to handicap. For starters, I want little to do with either half of the uncoupled Todd Pletcher entry, Con Lima (#2) and Jouster (#5). The latter could very well go off favored in this race, but I think that would be a huge mistake as she’s taken advantage of some pretty beneficial circumstances in recent races that don’t figure to be the case again on Thursday. Her early speed could be put to the test here, which coupled with a stretch-out in distance and a boggy turf course will likely lead to her undoing. Ditto for Con Lima.

I think Gift List (#6) would be a far more logical favorite, but even she would have some questions to answer in this spot. I do trust her more at this distance, especially on soft turf, however I think she’s quite dressed up off her last race, which came against suspect competition in the G2 Edgewood (save Aunt Pearl, who clearly wasn’t herself that day).

I’ll be using Gift List in some capacity, but from a price standpoint I’m far more interested in Fluffy Socks (#7) and Plum Ali (#10). The former is the “other” Chad Brown runner in this race, and while I don’t think the event she’s coming out of, the Memories of Silver at Aqueduct, was particularly strong, I do believe Fluffy Socks could move way forward in this spot. Brown often points his runners for this week of racing and they tend to outperform their odds, which is saying something considering his horses take inordinate amounts of money on a daily basis, so Fluffy Socks probably has some improvement in her as she makes her second start of the year. She also didn’t get an ideal trip in the Memories of Silver as she was pinned down in last leaving the far turn, but it’s really her record on softer turf that’s caught my eye. She really seems to thrive on courses like the one she’ll encounter on Thursday, so I think all indications are that she’s primed for a big effort.

Plum Ali is my top pick, however, as I believe she ran much better than it looks in her first start of the year in the G2 Appalachian. She finished behind both Jouster and Gift List in that spot, but she had zero chance to make an impact given the way the race unfolded, with Jouster setting a glacial pace and sprinting home to victory. I thought Plum Ali ran really well considering, and I imagine she’s set for even better in her second start of the year, especially in the midst of her trainer Christophe Clement’s torrid run at Belmont.

I’m assuming this turf event will be a casualty of the wet weather on Thursday, since there’s not much incentive for track management to have the ground chewed up for a lowly maiden race. Unfortunately, there’s not much to go on if the race is switched to dirt. Meet the Beauty (#9) would probably be the filly to beat. She’s run OK in two main-track outings thus far in her career, but that’s as much as I’m willing to say for those races and it wouldn’t at all be a surprise to see her get beat. Her experience on the surface certainly counts for something, however she could be vulnerable as the favorite.

Instead, I prefer a filly who’s run exclusively on turf in her career but has some serious pedigree for this surface, and that’s Star Command (#3). This 4-year-old filly was really starting to come into her own late last fall and into the winter, and although it is disconcerting her connections haven’t even tried her on dirt, her breeding indicates that such a switch won’t be an issue at all. A bullet work on the Belmont main track on April 27 bolsters the dirt case for her, as well.