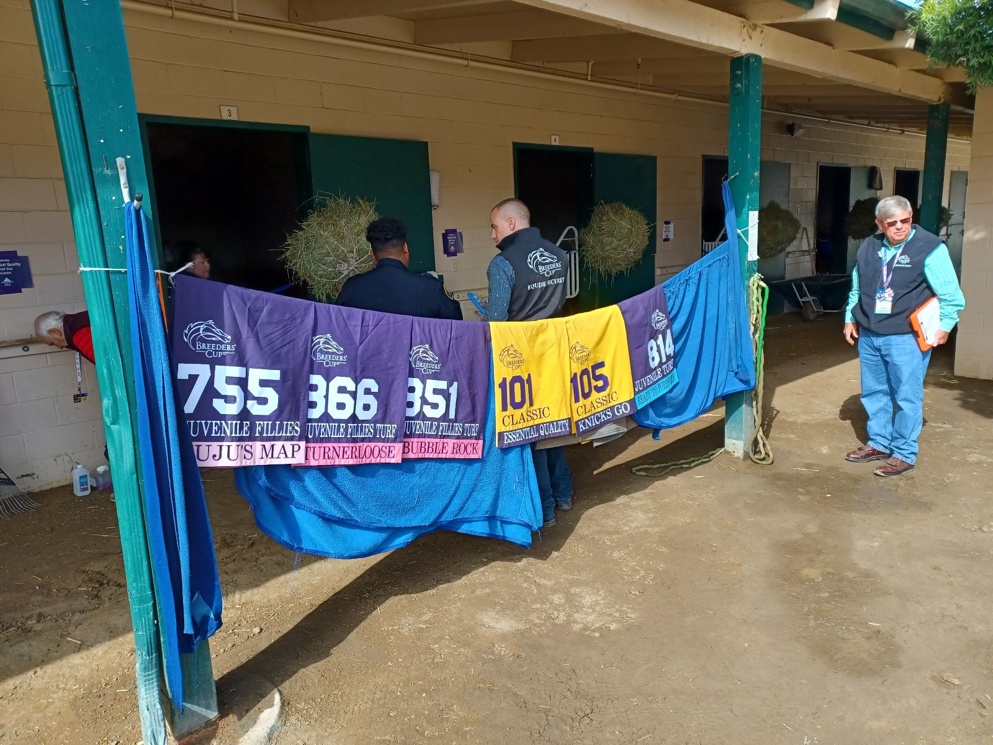 Brad Cox's Barn at Del Mar was decorated earlier this week with a number of saddle clothes ... Will either of his runners entered in the Breeders' Cup Classic bring him the coveted prize? Have a read ...

The $6,000,000 Grade I Breeders' Cup Classic rounds-off the 14 races of the event and it is poised to be a fascinating race.

J.N. and myself lay out our thoughts below...

And so we get to it. The Breeders’ Cup Classic. I can make a case for six of the nine runners to win this race. The two short-favorites are both remarkable horses who have had outstanding campaigns. Essential Quality (#4) is on the verge of being crowned the top three-year-old of 2021 and would be assured of that should he win here. Stablemate Knicks Go (#5) and guarantee the top male older horse award with victory in this race as well. Trainer Brad Cox has every opportunity to win this race.

EQ has only tasted defeat once when he was forced four-wide around both turns at the Kentucky Derby and still was in the mix coming down the stretch. He has shown plenty of guts when challenged and to back against him is a tough thing to do.

Yet here I am. My top choice will be the winner of the aforementioned Kentucky Derby - Medina Spirit (#8). You all know his story and that he could still very well be stripped of that victory due to a failed drug test following victory at Churchill Downs. Next time out he just didn’t look himself as Rombauer shocked many in winning the Preakness.

A summer of freshening up however has seen him return with a good looking win in a very strong edition of the Shared Belief Stakes and then he got the better of older horses in the Awesome Again Stakes. He is every bit as gutsy as EQ and if he can get out front (which is not going to be easy) then I struggle to see him letting anyone get past him and you know Baffert is going to be desperate to get this one. If he does win then the champion three-year-old will surely be his rather than EQ’s.

Bill Mott has got Art Collector (#6) very much pointed in the right direction. I was a big fan last year but he’s taken a huge step forward since moving to the new barn. The Charles Town Classic and the Woodward are both really good wins. If I wanted to single up a big price then I’d play this one.

Personally I’m not as big on Hot Rod Charlie (#3) as others but I can totally see that he’s a contender and Steve Asmussen seems to think that Max Player (#9) has turned the corner and two wins in a row over Happy Saver seems to indicate that train of thought has a lot of merit.

I’ll go five-deep on multi-race tickets but Medina Spirit will be my top pick.

We have finally arrived at the finale, and just know that there will not be a Claiming race on the turf with a 14-horse field of 2-yr-olds going around 2-turns for the very first time. No … we are handicapping the BC Classic. A seminal event on the calendar … last year, it was Authentic who won the day, securing a coveted Eclipse Award for excellence. Win here, and your name becomes synonymous with greatness.

We have an interesting scenario this time around in 2021, as Brad Cox enters a pair of runners from his barn. That might not sound all that unusual, but it is. They are a couple of horses that are only similar in color … that is where it ends. Essential Quality #4 is facing his last race before he retires to stud. His record since KYD147 is spotless. Through the Belmont, Jim Dandy, and Travers, Cox found ways to get more out of his talented colt. A win here would secure an Eclipse Award for sure. Regular rider Luis Saez is back, but will “EQ” be ready for action off-the-bench. If you walk around Cox’s Barn, you will say yes. He is meticulous and focused on one thing, getting his horses ready to compete. Unlike his stablemate, Knicks Go #5 is an older horse, with 23 starts under his saddle. Since coming to Cox’s outfit from Ben Colebrook, the son of Paynter has excelled in every way. Joel Rosario is the perfect jockey for this mount, and he has one job … put him on the lead. His breakaway talent us undeniable, and I am sure that Cox is thinking that he is going to be hard to catch. It is “EQ” vs. “Knicks” … but wait, aren’t there others running in this race?

I am inclined to play against “Knicks,” and continue to support “EQ.” But I also want some insurance sprinkled in, just in case. It is more than logical to have Hot Rod Charlie #3 as an option. This horse has captured the attention of Thoroughbred-land with those boisterous connections. This colt has a strong running-style for Doug O’Neill, and I am sure he is going to have this one ready to go, with Flavien Prat aboard. One other experienced router that has impressed me this year is Steve Asmussen’s Max Player #9. Even though jockey Ricardo Santana has some weaker than normally numbers, he has a nice horse under him, who is quite tactical. Do not overlook this “player,” as I am prepared to put this son of Honor Code at the top of my list. Lastly, we cannot neglect the presence of current Kentucky Derby Champion, Medina Spirit #8. This much-talked-about colt has yet to be “DQ-ed” from that event. Is it coming? In the meantime, he and Bob Baffert have come to town ready for action! No Derby Points needed …

All in all, this is a strong field with a number of options. I want to go with Max Player #9, based on his latest 2 races. Maybe Santana can work out a trip … rating nicely for a score. What a tough race … fitting for the Classic!