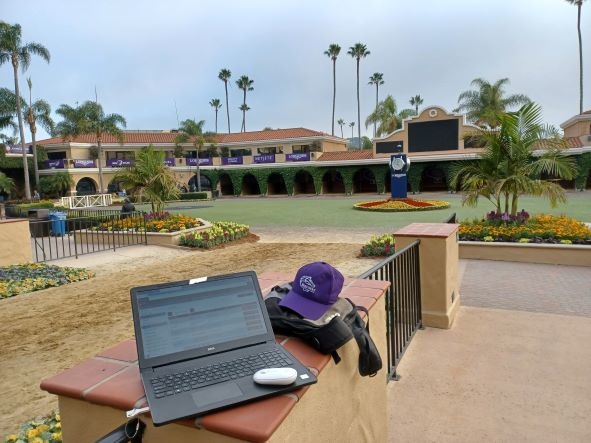 Breeders' Cup is here ... This turfwriter is onsite and ready for action! My LP5 can be found below ...

The Breeders' Cup from Del Mar is upon us! With an 10-race card (half of which are BC G1s), it is sure to be a challenging day for even the most-seasoned handicappers.

At Horseracing.net/us we have you covered, as our turf-man is ready for action! It is a good time for some of the best that world of racing has to offer. Stay tuned!

The Friday purple/white extravaganza gets rolling with this grass mowing speed game at 5F. Drop everything … don’t blink because it will be over before you know it. I have several opinions when it comes to a winner in this spot, but tops on my list is Hugo Palmer’s Hierarchy #5. This son of Mehmas (IRE), a versatile sire, has some major upside after a near-miss at Newbury back in mid-September. I see him progressing well, and he will get the more than capable Oisin Murphy. In that last race, he actually led at the 5F marker, so possibly this distance will suit him perfectly.

Let’s not turn a blind eye to some of the American-based runners … namely, Wesley Ward’s Averly Jane #8 certainly looks the part. Ward gets them ready in droves, and he must be respected on this surface and at this distance. With Tyler Gafflione, these connections are priming the pump for a “win.” Moving right along, One Timer #9 from the barn of Larry Rivelli looks like just the feel-good story we need in horse racing. The gelding can run, and it is truly wonderful to see jockey E.T. Baird get his due. A longtime rider in this business, he can win his 1st BC race … what an icing that would be on his cake!

I am also keen to use a couple of long shots like Derrynane #11 and Run Curtis Run #12. The former is a Christophe Clement runner, and should be considered dangerous after he won nicely up at Woodbine. With Joel Rosario aboard, this daughter of Quality Road could be peaking at the right time as she takes on the boys. Last, but not least, is Mike Maker’s intriguing runner. If Luis Saez can angle the deflector shields, then he might have a chance to get to the lead. I think that probably has to happen, if he wants to get this son of Summer Front home 1st in the end.

Leaving out both Twilight Gleaming #6 and Armor #7 could be a major mistake … they both look promising based on their form. Coming from strong barns can make all the difference. If you can afford it … I certainly would.

You might be inclined in this next portion of the LP5 to go with Bret Calhoun’s Hidden Connection #2 or Brad Cox’s Juju’s Special Girl #5. This is not the time to “get cute,” as the old saying goes, so stick to what you know. Steve Asmussen has the best runner in this spot against what amounts to a short field of 6. Echo Zulu #6 is hands down the best power runner on this form for Friday, and she should/will win after this contest is all said and done. Calhoun has a feel-good story surrounding this filly, but I doubt she will be able to get the dream trip that she had in the Pocahontas (G3) back at Churchill Downs. As for the “prohibitive favorite,” all Joel Rosario needs to do is let her run her race … if he let’s her do that, then it should be over pretty quickly. Time to crown a new queen at odds that will be very short (3/5?) …

As we head towards the backend of this illustrious Juvenile card, it is time to figure out some routing on the turf. With no “presumptive” or “prohibitive favorite,” that makes this spot a particularly inviting one to nab a price horse. You can really divide these entries into 2 categories … the North Americans and the Euros. As they face each other once again, I always tend to support the latter, even though the lack of “give” on the grass supports the former. One subdivision that should be noted is that some of the European contingent will have to rely on U.S.-based riders, since their “regular” jockeys were forced to stay home. I find this particularly angle a tough one to back, since their mounts are really unknown to them. Then again … these folks are professionals, and many of them have been through this time and time again.

Of the shippers from Europe, I am particularly keen on Francis Graffard’s Malavath (IRE) #12, who is well-bred by Mehmas (IRE), and gets Ryan Moore aboard. Though he has not ridden this filly before, Moore’s worldly travels are without equal (one of the few I would trust besides Frankie Dettori). Graffard’s star continues to rise, and if his runner can extend out to the distance, then she should be pretty game towards the end. Expect a giant sweeping move late, if Moore is able … Another grass runner that has some intriguing form is George Boughey’s Cachet #3. I realize she was 2nd a couple of races back in a Group 2 at Newmarket to rival Hello You #6, trained by David Loughnane. Lest we forget though, in her next race, she made the jump to Group 1 Co. (finishing 3rd) on the same course. That day the going was “good” (by American standards), and I am thinking that she will actually appreciate some firmer footing. The addition of Luis Saez as opposed to John Velazquez (who rides #6), is an absolute boon.

As for the American contingent, we have some strong runners in Christophe Clement’s Pizza Bianca #1, uncoupled pairs from Brad Cox’s Turnerloose #4 and Bubble Rock #5, Chad Brown’s Consumer Spending #7 and Haughty #11, and finally, last but not least, Arnaud Delacour’s Koala Princess #9. Any one of these looks capable based on their form. When it comes to this ticket, if you can afford to include them, I would … considering the depth of this taxing race.

The “signature” event on Friday is this race … the Juvenile! Last year, Brad Cox’s Essential Quality wowed what crowd was on-hand at Keeneland. Now, it is time to anoint a new champion, who will automatically ascend to the top of the initial KYD Contender chatter—always fun.

In this spot, I am high on Chad Brown’s Jack Christopher #1 … a colt who was impressive in the Champagne S. (G1) at Belmont in early October. This team, which includes Jose Ortiz, seems particularly zeroed in. If he makes the trip out West in fine order, then it should be all systems go. Much has been made about Brown and his dirt horses, so I am sure the NYRA-based trainer (who is known for grass racing) is looking to get this one home.

I will be “Singling” this one, but I have to mention the presence of Mori Hideyuki’s Jasper Great #2. The son of the now deceased Arrogate, just absolutely romped on debut in his home country of Japan. Winning by 10-lengths at Hanshin Racecourse made many awaken and take notice. Trainer Hideyuki is looking to score Japan’s 1st BC win, and if this runner takes to the track like he did breaking his maiden … lookout!

Rounding out the Friday ticket is another tough route for freshmen … this time around it is the colts that take to what will most assuredly be the firm Del Mar turf. In this race, it appears the superb Godolphin conditioning of Charlie Appleby will try to win the day from the inside post positions. He has the uncoupled entries, Modern Games #1 and Albahr #2. I would tend to give the inside track to the latter, since he was certainly stellar up at Woodbine in the Summer S. (G1). Ridden by Frankie Dettori, as he will be today, he just dominated the other 8 horses going a mile over less than forgiving ground. I would expect him to be sharp coming to Del Mar, and very difficult to match. As for Appleby’s other entry, he could certainly win, especially after making the move from BT races to Group 3 Co. Still, I want some value, and I am not shy about seeking it.

When it comes to a top selection, of course you could back Hugo Palmer ‘s Dubawi Legend #14, and no one would try to “talk you off” that pick. But I am not so sure that is the best selection for the money. My own coinage doesn’t fall to the Mark Casse horse of the same name (Coinage #13), but rather to Mike Maker’s Stolen Base #9. This colt by Bodemeister was very strong late in the game in the Bourbon (G2) at Keeneland on 10 Oct. Maker is simply the best at finding ways to compete at the highest levels. He proved last year with Fire At Will, that he has the ability to outrun the odds. I like the addition of Umberto Rispoli, who has strong turf riding skills, and knows the Jimmy Durante course like the back of his hand. I wouldn’t count this runner out, and I will be betting him heavily come Friday. He is not a “Single,” but he is my long shot pick of the day.

Enjoy the Breeders’ Cup from sunny Del Mar! I will be with you every step of the way … onsite for this signature Thoroughbred event!