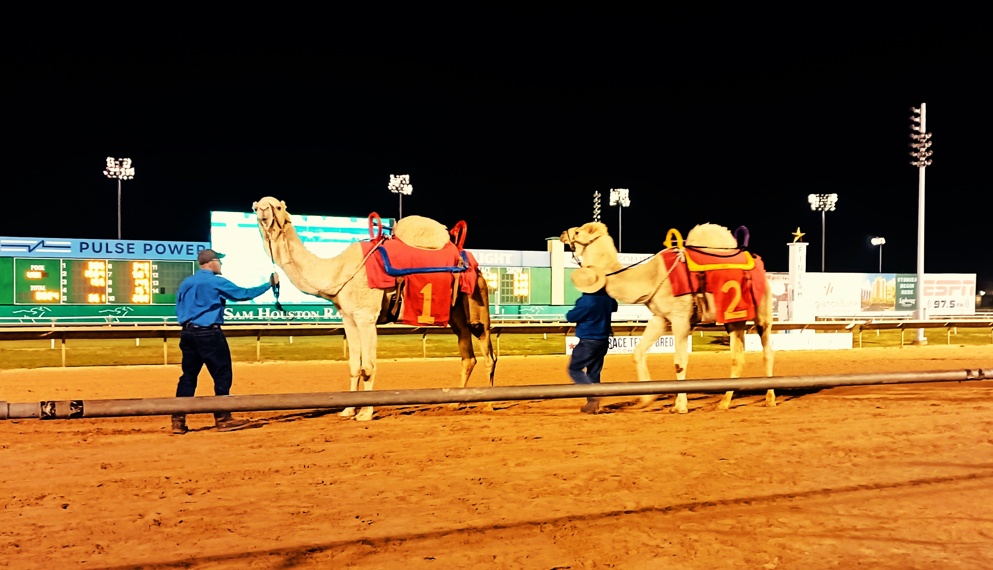 The 2022 Camel Derby went off without a hitch Saturday Night ... How can camels and ostriches help horse racing? Turfwriter J.N. Campbell explains ...

It was Derby Night, as General Manager Dwight Berube “faced the Saturday Night crowd.” Experience had told him what the signs were, and you could tell that he liked what he saw. With folks stacked up from the rail all the way back up the apron, layered like you might see in one of those penguin documentaries, it was a welcome change. Berube, part forensic scientist with a sprinkling of showmanship for good measure, knew this was quite a full circle moment for the veteran of an industry that has seen it all. To put it another way, compared to some evenings over the past 2 years … it was “Standing Room Only.”

Just a few hours before, as the patrons filed in, this particular moment offered a mix of great potential and cautious optimism. Captain Berube brought the boat up to periscope depth. Peering out of his office portal window, his head kept swiveling down and back up again, looking at his cellphone in what was a perpetual motion. That device was open to a nifty app, that in turn linked to a set of gate counters. Such is technology these days. “The old-fashioned turnstiles have fallen by the wayside, and this was the most-effective way to get an accurate count,” he said. About $7000 later, they were worth every penny. With every tick on the screen, it was a signal … time to pop the hatch.

The scene at Sam Houston Race Park (SHRP) had that feel of the “old days,” you know, before the dark time of COVID. Just 2 years prior, when shutdowns became vernacular, many pundits, including this turfwriter, wondered what would be the effect on horse racing? With Harris County (the locals), bearing down on the site with their continual stream of “revised” edicts, Berube made as many changes as possible to accommodate. However, it became apparent that the Meet wasn’t going to make it to April. The knell sounded, as a power outage sealed the deal on Texas Champions Night, and literal darkness covered the track … a precipitous end.

Flashforward to 2022, and with restrictions lifted … again with the perspective of a documentarian in mind … it was time to look for some visible signs of life. After all the cancellations, the Houston Rodeo, an economic juggernaut, returned in March. As for “Sam,” as it is affectionately known, they too were clearly seeing people returning to the racetrack. But the true test would not be the Grade 3 Houston Ladies Classic or North America’s All-Time Leading Trainer, Steve Asmussen … no … it was a different magnet … camels and ostriches. Since 2012, these celebrated runners have attracted strong attendance, and family fun (Berube even authors a “Tip Sheet”). With a bout of 30-degree weather on Friday, the masses were not exactly teeming through the gates for what has been dubbed “The Camel and Ostrich Derbies.” Saturday though … that was going to be a new story.

On both sides of the winner’s circle, standing nearly 10-12 deep, the local H-Town throng was out in force. To hear Berube’s reaction, as the camels were brought out to the Main Track by their expert handlers, “You know, after all we have been through, this is a very gratifying moment, and I won’t forget it.” There was chanting, and cheering, as the revels were more than underway. With everyone assembled once again, track announcer Nick Tammaro added color, pithy commentary, and then gave the call to the post. Offering thick description, it was King Camelot, Donald J. Hump, Mr. Spitz, and Humpy Grumpy, and their “jockeys” who took their positions. Everyone had a dose … a salubrious time for sure, as the dromedaries sprinted 100 yards down the lane.

The camel and ostrich races at SHRP have become a staple at other tracks like Penn National, Zia, and Retama. Berube told me that it has provided a much-needed boost to the racetrack economy. Capturing everyday people’s attention is more than difficult, and even more so at a Thoroughbred Meet. Sure, you have the regulars that come to watch and wager, but attracting new fans seems like an Everest to climb in the highly-competitive Digital Age. Tracks have weathered many storms of late, most of them financial, and although the proverbial “handle” (the amount of money wagered during a specific time, i.e., nightly or over the course of an entire Meet) news is touted by marketing teams and the turfwriting media, attendance is being watched very carefully.

Larger tracks, especially in the wake of COVID, continue to see handle numbers rise steadily, and some gaming watchers, point to betting apps as the cause. The ability to wager from the confines of your own home is not a new innovation, but states that allow it, continue to see strong support, despite competition from sports betting. Smaller tracks are still looking to put people in seats, and offer “entertainment” in creative ways. Berube and his team have found that in the camel and ostrich racing, in order to court families, you must have a variety of activities on your card. The idea being, that if fans come out, they might be enticed to stay for more racing. “We will see a surge at the gate tonight, but what will be really key is if people choose to hang around after the camels are done, then we will know,” admitted Berube. Venturing out, a concept frozen in time, is beginning to thaw out.

Sam Houston was in luck, people did stay. Berube’s tally machine churned, and in the end, the number hovered around 4,500. The GM told me with a smile, “That was double the normal Saturday crowd, and our biggest so far this Meet.” They tucked in, enjoyed each other’s company, and cheered on Thoroughbreds that were back on the track in Race 6. Walking through the Sam Grandstand, you get the sense very quickly that horse racing still can command the attention of a wonderful “live” audience. This sparks an intriguing debate among horseplayer-pundits … the “minor league atmosphere.” Should tracks deviate from the 9 or 10 race model, trotting out the rote cycle of paddock, parade, and post? I mean, you wouldn’t find ostriches running at Keeneland would you? Decidedly not … a silly suggestion! But horse racing needs new fans, doesn’t it? What Berube has come up with is the perfect “diversion,” or call it an “enticement” … one that trends towards an old school spectacle. Next up ... the Wiener Dogs Races ... yet another "must-watch" annual event at the track.

The evening’s festivities at Sam Houston produced a flavoring of results that should remind all of us that care about Thoroughbred racing that expanding the vision of what is possible, helps this game. What we should be about is what Dwight Berube is committed to … winning the crowd by serving the present and the future. “It’s an investment,” as he puts it plainly. Lest we forget … speaking directly to you digital bettors in your online world … the horses and the masses that come through the gate, are what make this sport incredible. If we don’t win the crowd, however we can, then the racetrack, as we have known it, ceases to exist. And that’s how camels and ostriches can help horse racing.