Campbell Feature: Sonny Leon and the fate of a Kentucky Derby jockey 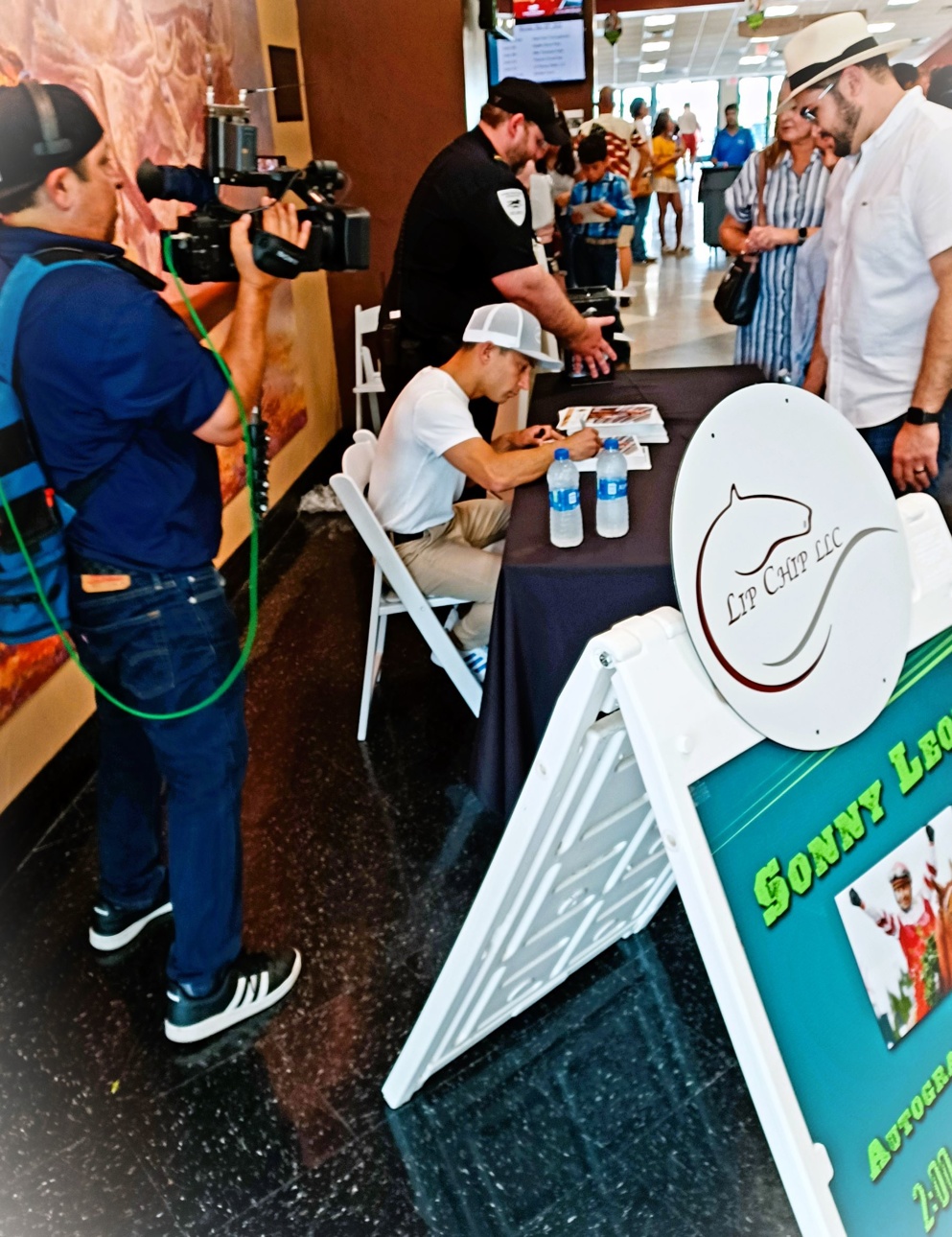 Jockey Sonny Leon signs autographs during a session at Lone Star Park on Memorial Day. The Kentucky Derby-winning rider posed for photos, signed pictures, and talked to our J.N. Campbell about what he needs to do moving forward.

A long line formed the queue. It snaked back and forth like a drunken kite. Gone, the concept of social distancing, as decaled spots on the floor were probably shoved into a closet somewhere. Just off the Paddock, the scene was a beehive of activity. Memorial Day brought remembrance, the option to put troubles aside, and afford fans the chance to find a place in the sun. It was blustery though, and what they call the “hot hairdryer” could be clocked in knots, using North Texas as an ocean. Racing was underway at Lone Star Park for “Million Day,” but they weren’t going to miss this opportunity. Over the din of the crowd that assembled around a small table where he was signing autographs, packs of hungry signature seekers milled about.

About 10 spots back, one woman was smiling ear-to-ear, clearly looking forward to meeting him. “I bet him on Rich Strike,” she said with glee, still pretending to clutch her golden ticket, “and no one can take that away from him!” She sappily kept on, seemingly to tell anyone that would listen, “He rode that horse like Calvin [Borel], and now he is going to the big time, you watch.” Unknowingly, a bit further back, a naysayer full of mirth countered, “Well, he’ll be back at Belterra before you know it, winning here and there … but you watch, nobody’s going to remember him in a couple of months.” He had the look of a hawker, selling that thought, and clearly convinced that others knew it too.

Their stances were about … the fate of a jockey. In this case, Sonny Leon, a man in his early 30s that about a month ago won the Kentucky Derby aboard trainer Eric Reed’s Rich Strike. You might have heard … his mount was 80-1. Listening to both of their perspectives, you could make the case for either of them. In one way, the “rosy” outlook by the woman portends something glorious for Leon, especially considering that in little over a week he could build on her claim when he climbs aboard the son of Keen Ice … the Belmont Stakes looms. But what of Mr. Negative and his opine? He could be deemed a realist, reminding us that the story of Icarus is a warning when it comes to overconfidence.

As pictures via “Horse Racing Twitter” flowed after the race … at Jeff Ruby Steaks in Louisville, the winning jockey was the toast of the town. At the restaurant, accompanied by legends Mike Smith and John Velazquez, he got a series of ovations. A conquering hero was the message being sent. After, his image and words flooded screens like “Cush” in the film Jerry Maguire. Big screens … small screens … they could not be missed. As I was watching all of the interviews, I wanted to know for myself how Leon was managing his newfound fame, and what to think about this question of, what comes next?

Certainly, watching my colleagues ask Leon the same set of questions, over and over and over again, gave me clues. They undoubtedly continued the barrage on Monday afternoon, as the jockey came to Grand Prairie for 3 mounts on the afternoon card. “How has it been since you won?” “Did you ever think you would be a Derby-winning jockey?” They were after the same thing I was … trying to unearth the secret of Leon’s sudden success. The reason fans lined up to get his signed picture that showed him crossing the wire under the Twin Spires was its pervasiveness. The stuff literally of movies. Lest we forget, this is a sport that needs it, especially considering its struggles to float against a rising tide of pessimism.

When I caught up with Leon, he was generous with his time, just as he was at the table. Taking pictures with fans, and answering their questions reflected his jovial side, because there is also a serious one. The man from Boyd’s Belterra is quick to flash a smile. Yet, when you ask him questions, you can tell he is thinking about it, turning it over and over again … whether he is speaking his native language, Spanish, or in English. I was struck by his firmness, and steely-eyed approach to his craft. He understands the “fate question,” all too well because he has watched others combat it on and off the racetrack. When you ride at smaller venues, day-in-and-day-out, you gain a certain appreciation and perspective. Hunger takes hold, and you look at opportunities like they are a big tasty ham sandwich. They don’t come along all that often, so when you have a chance to dig in, you make the most of it with fork and knife in-hand. 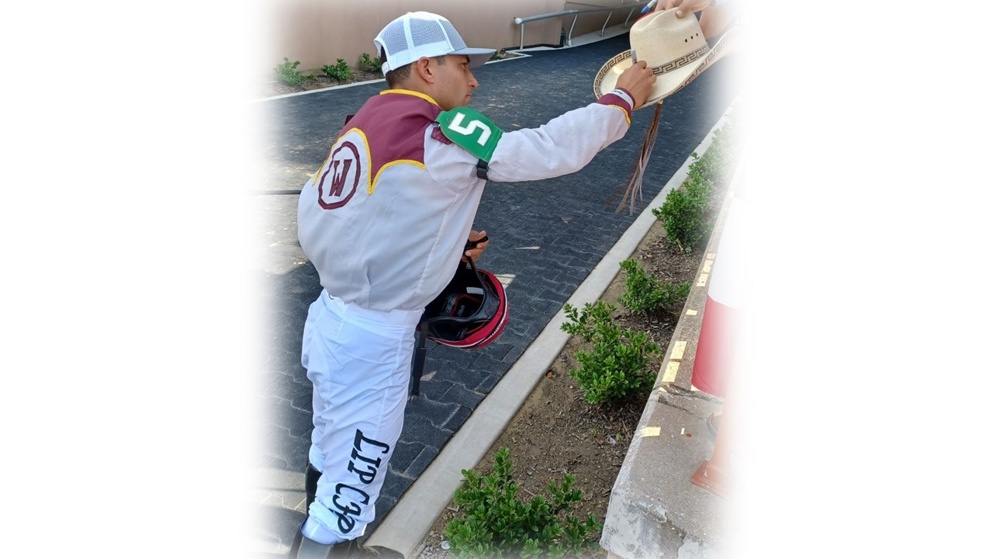 Leon signs autographs for some fans after his 1st race at Lone Star Park on Monday.

Leon spoke about the media and fan whirlwind, but at the end of the day, he said with conviction, “I still Sonny Leon … I was before Kentucky Derby, and I am still the same after.” Like he has told many an interviewer, he understands the importance of history and how he had already declared victory just “being there,” but what I thought was more important was that his work ethic … how much time he puts in … hasn’t and won’t change him. There is still much more to do, whether it is in the Belmont Stakes, or in the 1st race at Belterra on a Thursday. Venezuelan by birth, he reminded me that he came to this country with big dreams, but success is measured with patience and time. Thinking about his “win,” he is both grateful, and humble when it comes to all that has happened. But he also admitted, in a rather matter of fact way, “This is ‘bout the people and the horses, and I going to continue to do what I do.” Most of all, Leon lives in whatever moment he is in. If he is signing autographs, then that’s what he is doing. His “present-ness” is refreshing, which might explain his proclivity for treating all events, as equal.

I wanted to explore Leon’s approach a bit more, so I called in an expert with his own insider perspective … Ramón Domínguez. Like Leon, he is from Venezuela, and also came to America full of hopes for a riding career. Domínguez is a former champion jockey, a Hall of Famer, who has impeccable character, and a resume that reminds us just how talented he was in the irons. His post-riding career has continued apace, with numerous accolades that speak to his commitment to the sport. He’s not even close to being done. Currently, he co-hosts a podcast in Spanish with sports analyst Jose Francisco Rivera called Exacta Box, and if you caught his interview with Leon after the Derby, it has a series of embedded gems.

Domínguez told me that he was in the Jock’s Room before the Derby, conducting interviews and catching up with old friends. The Eclipse Award-winning rider turned riding crop innovator, had only met Leon on one other occasion, when Jose Flores sadly passed away in 2018 after a terrible accident. He found Leon sitting quietly, with his wife and daughter present, just taking in the scene. With only one mount on the Derby card, the Cincinnati-based rider would have to wait his turn. “I thought he looked calm and collected, which considering what was coming, is quite unusual,” Domínguez admitted. “I would be obsessively studying the form every chance I could, but you have to remember that every jockey is different.” After discussing the previous whirlwind day when Rich Strike was suddenly drawn-in from the “also-eligible” list, Leon told his countryman that, “God put me here for a reason … my horse is going to be laying back, he will make a strong run.” Pausing briefly, he continued prophetically, “He is going to make himself heard at the end.”

Based on his experience, I asked Domínguez what is the best course of action Leon should pursue, now that stardom had found him. “Turn the page,” he said, rather matter-of-factly. “You cannot sit around and say that better mounts will come your way, and this is the stepping stone I have been looking for.” The life of a professional jockey doesn’t work that way. The job only gets tougher because of the pressure, expectations, and there are actually only so many opportunities available. In other words, time is fleeting. Domínguez gave a soft chuckle when I mentioned “advice.” “There is something my agent Steve Rushing, who represents Irad Ortiz, always said … “When you think you’ve done something great, act as if you’ve done it before, and you may get to do it again.”

With over 5,200 starts and 780+ wins to his credit, Sonny Leon’s story isn’t finished just yet. He has done something great, but whether he does it again, depends on a host of factors. Based on his own account, we can take at face value that the present is where he is right now. On Thursday, it’s Belterra … next week … Elmont, New York. Maybe Ramón Domínguez said it best, “Stopping to smell the roses, literally in this case … doesn’t make you hungry.” Will Sonny Leon have great success in the Belmont Stakes? Leon isn’t worried, as there isn’t time for all that talk of what comes next? As for those opinions from the autograph line at Lone Star Park, they will remain just that … when it comes to the fate of a Kentucky Derby jockey.