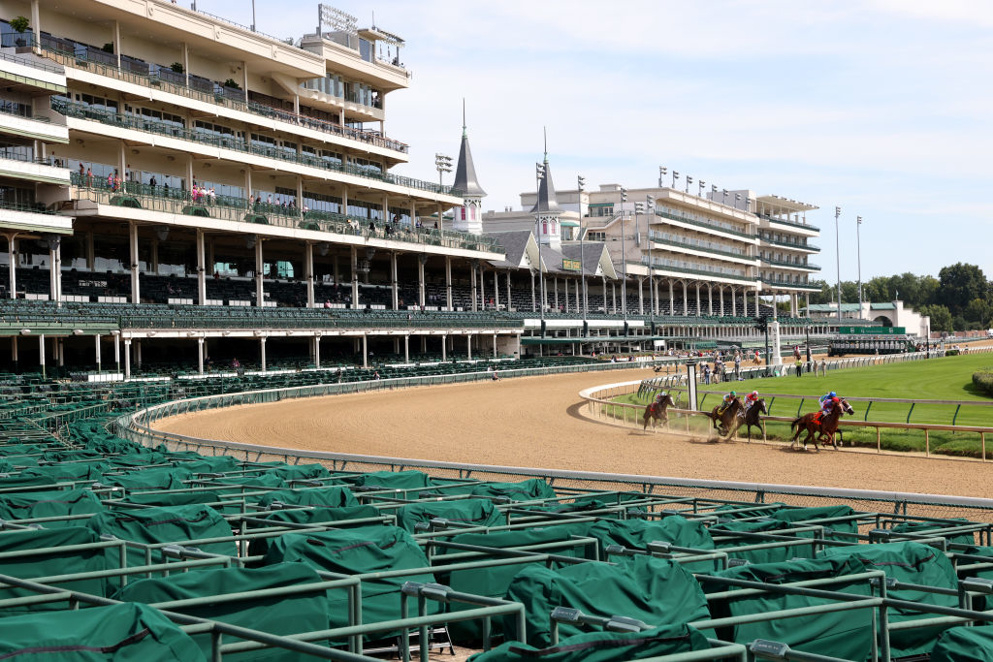 Churchill Downs has a major Saturday card headed your way! It is anchored by the Grade 2 Stephen Foster ... so, check out this P5 ticket that we have in-store!

Prepared to run through the July 4th holiday, Churchill Downs is set to complete their Meet, but not before they run the Grade 2 Stephen Foster S. With an 12-race card on Saturday, it will make for some excellent betting opportunities. We have you covered with an affordable All-Stakes Pick 5 ticket! Have a look ...

One of the features this summer is the new Matt Winn Turf Course, which opened with a brand new grass surface in April. Recently, news broke that they would be canceling races in order to allow the sod to take root. The goal is to have it ready for August when "Million Day" moves to the Twin Spires.

Named for one of Mark Casse’s greatest runners on the grass, this race will be forced to the dirt. The Matt Winn Turf Course simply isn’t ready. In the meantime, we start this sequence with 7 entries that all look promising. I know that Steve Asmussen’s Wicked Halo #4 looks to be the standout, especially after winning from just off-the-pace in a BT @CD on 12 June. Tyler Gaffalione gets the call once again. If the daughter of Gun Runner can harness some of that power she has, then you could be looking at an easy winner. I don’t think that is the case … Instead, I much prefer Joe Sharp’s Heartyconstitution #1. Ridden by Luis Saez, I think this one is up to the class jump. The move to this jockey from Martin Garcia is a welcome one. By Constitution, she was locked up in that OC80kn1x on 3 June, and if given the proper pace scenario, I think she could win this race. One other one to consider is Brad Cox’s Juddmonte homebred, Patna #2. A well-bred filly by Into Mischief, she has what it takes to rival a group like this one. We know that when Cox and Florent Geroux get together, they can be virtually unbeatable. Including this hiker is a must, I think. Going with both inside runners is the plan … moving right along …

Here is a wide-open race that could really go to anybody. Sure, you could back trainer Kenny McPeek’s Rattle N Roll #9, but I am not sure that I totally trust this one. He has some solid 3-yr-old class lines, but it should be said … he hasn’t won a race this year. I am willing to leave him out, and look for value elsewhere. When it comes to a top pick, I am pretty keen to “Single” Rudy Brisset’s Kuchar #8. A WinStar homebred by Uncle Mo, do not discount his running ability just because of his lack of stakes races. The Oaklawn S. $150k against Home Brew was pretty solid. I like his rating ability, and if Florent Geroux can get his mount out of the gate in good order, set up just off the speed, then it will result in a score. Maybe my best bet of the entire day … Yep, it is a “Single” …

This year’s edition of the “Fleur” includes 4 alums from the 6 May running of the La Troienne S. (G1) at Churchill Downs. She’s All Wolfe #2, Ava’s Grace #3 (3rd), Pauline’s Pearl #4 (the winner), and Shedaresthedevil #5 (2nd) will try best each other again. I am thinking that Brad Cox’s “Shedares” will make a resounding comeback in this spot. She is a need-the-lead horse, but I know that Florent Geroux is just the person for the job. I would not count out Norm Casse’s Super Quick #1 either. Even though this filly by Super Saver has taken a much different road, I think she showed her ability to get loose on the lead is there. Joe Talamo gets the call, since Geroux is with Cox, so it will be very intriguing to see how the 1st furlong shakes out. Speed duel? Possibly … Either way, I am on the speed …

The dirt sprinters will be out in force this race, but let’s face it, trying to find someone that can match Aloha West’s #4 resume will be pretty tough. The good folks at Eclipse Thoroughbreds sure celebrated in-style at the Breeders’ Cup after they won the BC Sprint (G1). The odds on the tote that sunny afternoon at Del Mar read 11/1, but it seemed much greater. Trying to eclipse that feat has proved difficult in the Churchill Downs S. (G1) and the Met Mile H. (G1). Then again, he was up against Jackie’s Warrior and then Flightline. Betting against Wayne Catalano and Joel Rosario just does not seem like a good idea. Other than Greg Foley’s Bango #5, I do not see too many that can rival “West’s” speed. The best idea … a “Single.”

One of the highlights of the holiday weekend is this race—The Stephen Foster S. Once a G1, it dropped down about a year ago. Still, it has some cache about it, and my strategy here is to include the presumptive favorite … Bill Mott’s Olympiad #3 … but also include Brad Cox’s Caddo River #1 and Todd Pletcher’s Americanrevolution #2. Based on his record, Mott’s ace seems primed for yet another score. If he comes to the sandbox to play, he will probably win. His past 4 races included some worthy opponents, and he clearly likes the track and this distance. It is great to see Junior Alvarado ride such a high-caliber runner as this one. Just in case he falters, I also like Cox’s wild prodigy, who seems to run all over the place. The Shortleaf homebred has matured greatly since his Derby Trail days last year, and Ricardo Santana is as aggressive as they come. This could be his breakout moment. As for the Pletcher-trainee, even though he missed last time out in a BT @CD, that could be deemed an aberration. We all know this one is talented, and make no mistake, he can run-on nicely from the back of the pack. Luis Saez just needs the opportunity down the lane, and a big kick. Let’s go a little deeper here, and see if we can get this ticket home!

Enjoy some racing under the Twin Spires for Stephen Foster Day! Best of luck on another run at Churchill Downs! Don’t forget to follow us on Twitter … Horseracing_USA !!!