Commentary: The Duality of the Southwest Circuit’s Climate 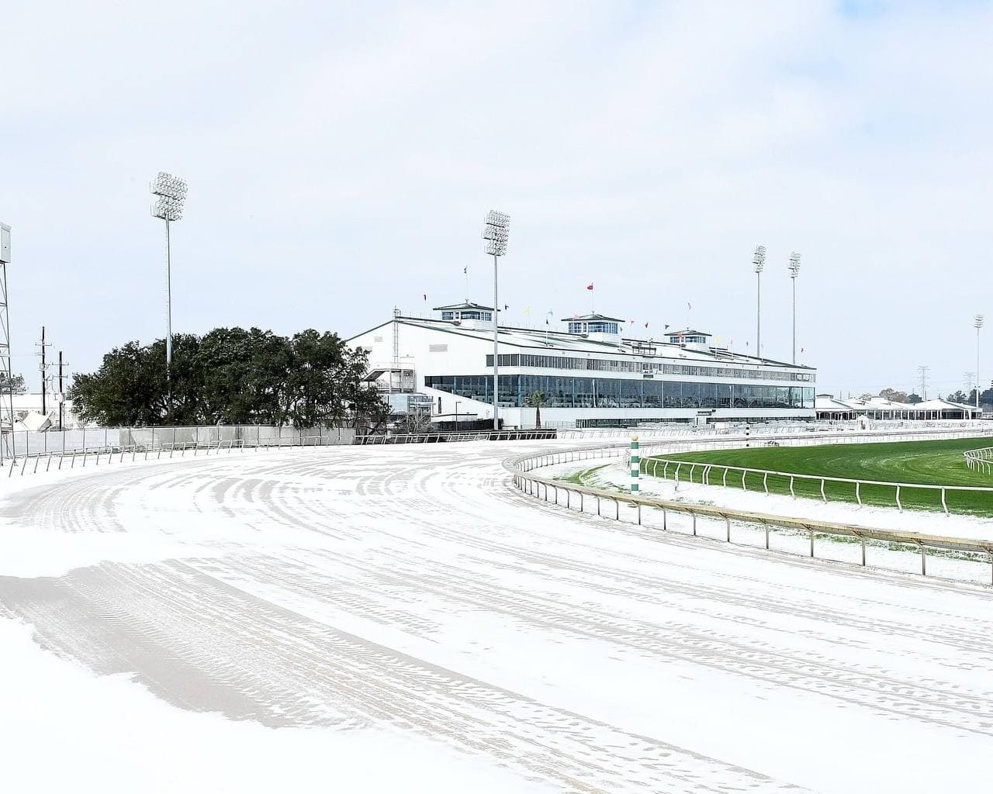 Sam Houston Race Park under snow and ice...This past week along the Southwest Circuit, everyone was greatly affected by the weather. J.N. Campbell commentary looks at the lessons and the region. (courtesy of Coady Photo)

The view from Robertino Diodoro’s Oaklawn base looked bleak. Ice and snow piled up everywhere, as the thermometer lowered to a spot previously unseen in the past months. Conditioning grounded to a halt. His incredulity concerning the situation was apparent when he simply said, “This is crazy.” Being from Canada, he knows what these types of conditions are like. But this Arkansas storm enveloped the region so rapidly, and with malice, that even he was stunned. Others would experience the same.

Down in Texas, a little over a week ago, I was speaking with Dwight Berube, the General Manager of Sam Houston Race Park, about the coming weather system that was headed into the Southwest. He grimly reported, “You know, I’ve been here almost 3 decades in this state, and this might be the worst storm we see to date.”

In just a matter of hours, Thoroughbred racing, and every other enterprise, were on the shelf. Faster than a Texas tumbleweed rolling across a blacktop, trainers scurried to protect the members of their stable, and everything changed overnight. In some form or fashion, from New Mexico to Arkansas down to Louisiana and over to Texas, everything seemed offline.

For the first time in a year, it seemed like we finally had a distraction that wasn’t specifically about COVID-19. The virus was still present, politics still spun, but it was all forced into a frozen backseat. When all you are trying to do is huddle for warmth, and cannot watch what the Media is reporting, that becomes your focus.

Several pieces of news congregated over the past week, starting with that major ice storm. The Southwest is an expansive region of the U.S. which has been defined by different walks of in distinct ways. The hub is Texas, a place that has infamously crafted an “independent” history dating back to before the 1830s. Well, before it had its own power grid, its borders were defined by individuality.

That spread to various sports, as colleges and universities were founded after the Civil War. By the 20th century, a “Southwest Conference” (SWC) of players was amassed with everyone from academic institutions in Austin, College Station, Dallas-Ft. Worth, Waco, and later, Houston and Lubbock. Joining them were schools in Oklahoma and Arkansas. It was a heyday, and lasted all the way to 1990s, before it was scattered to the four winds.

Thoroughbred racing likewise developed a regional “Southwest Circuit,” much as other parts of the country did, that began to “meet” year-round. Like the circus or any other form of itinerancy, the same horsepeople brought their runners to a variety of tracks that were open for a defined period of time. The Fair Grounds in New Orleans, Oaklawn Park in Arkansas, Remington Park in Oklahoma, Lone Star Park, Sam Houston Race Park, and Retama Park in San Antonio, and finally out to New Mexico, in places like Sunland, Zia, and Albuquerque, all formed a loose confederation.

What we were reminded of once again through COVID-19, and now with this blast of cold air and ice over this past week, is that this regional Thoroughbred highway is greatly affected when one part of the system is closed or extensively shutdown. That was present this past year in New Mexico when the governor of that state, chose to keep the casinos closed, and not re-open them because of the supposed threat of the virus. This cutoff any opportunity for horsepeople to survive for any extent of time. We heard last week what we already knew that Sunland Park would be cancelling its 2021 Meet, and not running its signature event, the Sunland Derby. The New Mexico Racing Commission made some board changes to itself (yawn…), but it has proved during this crisis to be an ineffectual bureaucratic organization—toothless in the face of disaster. What should they have done, you ask? Resign… that is precisely the course they should have taken.

Speaking of disasters, once the ice and cold air arrived throughout the region, all racetracks were closed or affected in some way. Oaklawn shuttered its windows and doors, cancelling its Southwest Stakes (G3) and moving it not once, but twice. Horses like Diodoro’s Keepmeinmind were kept warm as possible out in the barn areas, and Brad Cox’s chief runners, Essential Quality and Monomoy Girl were forced to stay put down in New Orleans. That location trapped many shippers since it was not blasted as hard as other parts of the machine.

Still, the weather changed the conditions of the Risen Star card at the Fair Grounds, and it was miraculous that the track ended up in such good condition as it did. Afterwards, it became a sloppy mess, of course, but the Louisiana Derby Preview Day ended up being a bright spot to an otherwise miserable week. Conditioners with strings in Houston, like New Mexico-based trainer Todd Fincher, had to stay in New Orleans until the storm passed before they could return to their base. Senor Buscador, Grey Storm, and She’s a Gem, included. Fincher has now travelled more of the SWC this past year than almost anyone. Taking his show on the road where the races go. He may travel to Hot Springs next…

As I looked at pictures of tracks closed, covered in snow, they were silent landscapes patiently waiting for the humans and the horses to return. Little did those ovals and grandstands know that many have suffered, and continue to do so. Banding together, checking on our neighbors, relaying stories of strife, and doing the proverbial “hunkering down,” is the order when everything goes out the window. Maybe what we learned is a harsh duality; that the end is nowhere in sight, but we can simultaneously know that more hospitable conditions are on the way.

As we say down here in the Southwest Circuit, “If you don’t like the weather, wait awhile, because it is bound to change.” Time to return to racing...