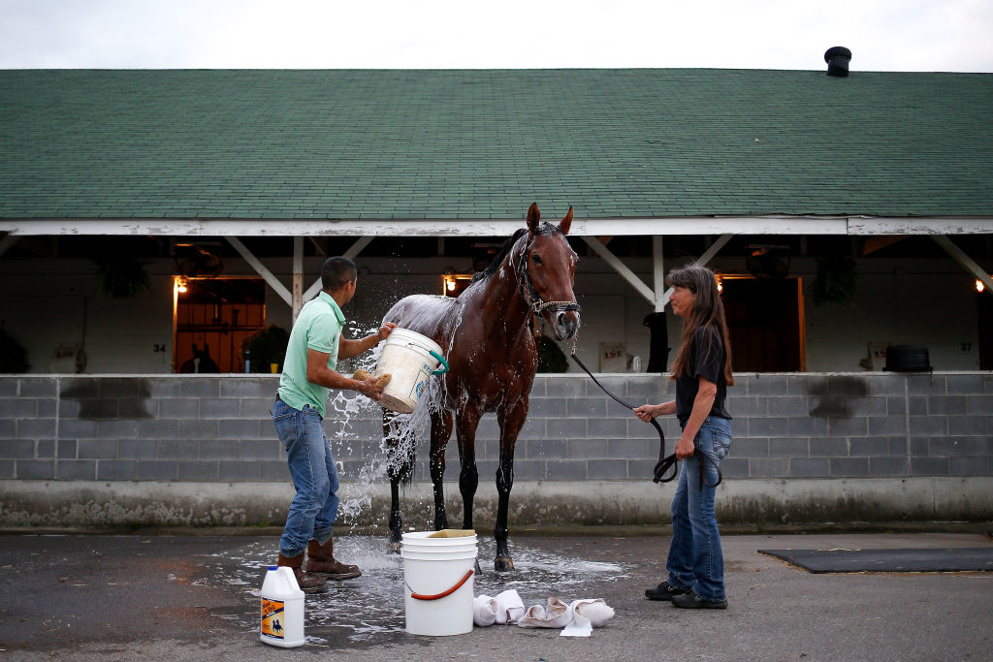 The Derby City Distaff S. has a strong purse of $750k ... take a look who made it in, and what their prospects are looking like ... Horse guides for all the stakes races on the Kentucky Derby undercard are here!

A true prize on Saturday’s Derby undercard, this race celebrates the dirt sprinters of the female persuasion that can go a bit longer. Winners from the recent past include the excellent, Groupie Doll, Dame Dorothy, Paulassilverlining, Mia Mischief, and who could forget, Bell’s the One? Last year, against a short field, it was Bob Baffert’s controversial Gamine that took home the prize. Who will join these ladies this year, etching their name into Derby Day lore?

Trainer Brad Cox got together with Frank Fletcher’s ops, and they continue to campaign this mare by Tale of the Cat. A front-running miler, she was just off-the-board in the Grade 1 Madison S. at Keeneland with Irad Ortiz in the irons. If she has her best stuff, can break well, and control the pace, then she has the capability to score. Was her loss in that race telling? I will be using her, just not on top …

The Cox ace that I do fancy, is this 4-yr-old homebred by Not This Time. She was up against her stablemate in the Madison S. (G1), just as she is now. The speed fig she posted was pretty impressive, and I like that the Eclipse Award-winning conditioner sticks with Flavien Prat. Her style is much more to my liking, and I think she has the power to win the day in this race. Can she make it 3/3 under Cox’s tutelage? I think so, and for a myriad of reasons, she is a top pick …

It is always great to see Paulo Lobo bring his string to Churchill because he has great stock, and a superb approach to racing. He isn’t one of the “super trainers,” but that doesn’t mean he cannot win some key races. His well-bred daughter of Into Mischief was another alum of the Madison S. (G1) at Keeneland, but she was never a factor. Stepping up from a G3 at Gulfstream to that G1 was just too much of an ask, but it should be noted that this one does have a win over the MT @CD, since coming over from Chad Brown’s org. Her early style could be useful against this group, and so could the aggressive riding of Tyler Gaffalione. Still, she is going to have to try again …

Wesley Ward’s experienced sprinter sure tried to keep up in the Madison S. (G1) at Keeneland in an effort to repeat as the champ … but she just did not have the “kick” when the time rolled around. Ward is switching up the jockey plan, and going back to Joel Rosario. What we do know is that this Munnings mare continues to take on challenges, and lest we forget, it was only 2-yrs-ago that she shipped to Royal Ascot to run an impressive 2nd in the Commonwealth Cup (G1). I think that most believe that the 7F distance is just too much, and/or that maybe turf sprinting is more of her bread and butter. What she needs is the right set-up … a solid stalking trip. Maybe the return of Mr. Eclipse will help … he has his days when he is just on fire!

This is a filly that has just gotten better with age, and I think the sky is the limit for her, if this daughter of Curlin can remain healthy. She not only has good breeding in her background, but a HOF-er is her conditioner … in Bill Mott. Coming back to Churchill, she already has a “win” in her ’22 debut race back in March at Gulfstream Park in a G3. There is no question that Jose Ortiz must try to get his best out of her, and that means ramping up that late turn-of-foot that she possesses. The last time she was at Churchill back in November, she did just that in a G3. However, this race is much more difficult … nothing easy on the Derby undercard. Others impress much more …

Neil Pessin’s prize pupil just continues to keep going … her overall record … 23/11-5-2 … not too shabby, indeed. Recall that 4 of those “wins” took place at Churchill Downs, and she obviously loves her home track. A mare by Majesticperfection, I think she is getting a little long in the tooth, but just when ‘cappers began to write her off, look what she did in the Madison S. (G1) … 2nd … Hmm … Last year in this very race, she was 5/1, ending up 4th behind Gamine. If regular rider Corey Lanerie can have some pace to run into, then that helps his mount’s cause. There is some late firepower drawn in here, and that may be easier said than done. One to consider … just based on the class rating.

A stablemate to the gifted Flightline, this mare by Competitive Edge is going to try and steal this one right from the break. She is a dirt sprinter with an impressive record, but she has rarely travelled outside of SoCal. She did have some action in Hot Springs at Oaklawn, and there is much to be proud of in those performances. Now, Sadler is looking to come back to Churchill, a place where he has had some success, and see if this one can make the jump back into G1 Co. You might remember that she was 2nd in the BC F&M Sprint (G1) to Ce Ce at Del Mar. Odds? 17/1 … Once again, HOF-er Johnny V is up, and we all know how talented he is … This one is probably the wildest card in the deck!

A Whitman homebred, this mare is also by Majesticperfection, and Ian Wilkes has worked with her to try and score another “graded” victory. It has been a series of “just missed,” but through it all, Julien Leparoux continues to serve as pilot. I am not sure that she has what it takes to rival the runners that are drawn-in this time around. In her defense, she is an alum of the Madison S. (G1), and maybe her “tracking” style will suit, if the pace works to her advantage. Watch the break, and where she settles … that could be the key to her being close, or shuffled back. If it’s the latter, then she is going to have a tough time making up ground.

It’s Derby Week! Join us for all of our analysis and selections for the big races! Should be great fun as we count down to the 148th edition of the Kentucky Derby! Be sure to follow us on Twitter … Horseracing_USA !!