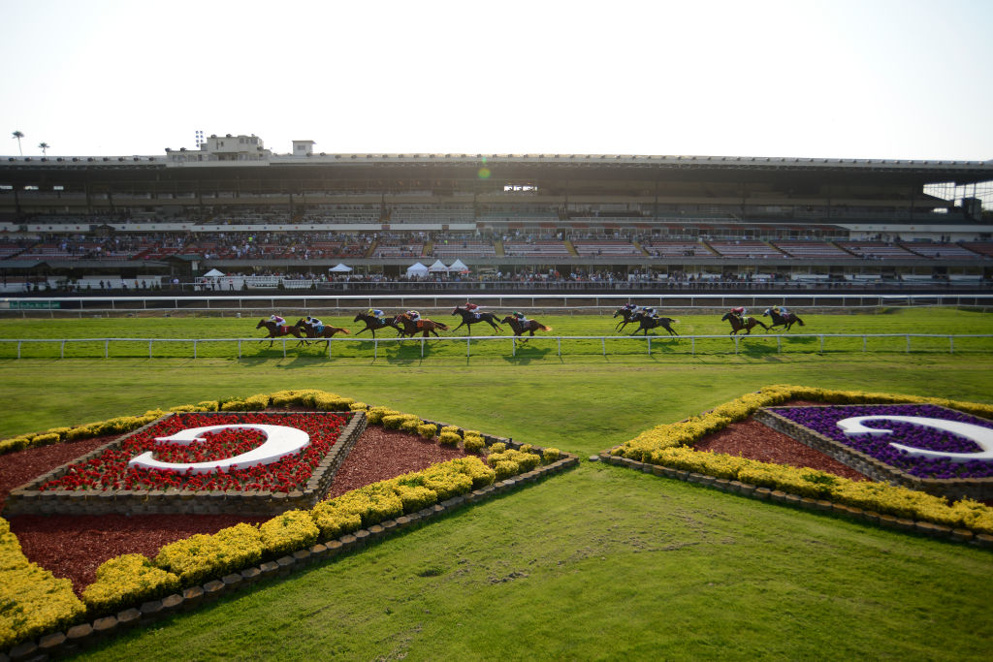 The Tapeta is ready ... Track Announcer Matt Dinerman surely is ... the El Camino Real Derby is set for this weekend. Check out this preview below ...

For over a decade, Golden Gate Fields has hosted the El Camino Real Derby. It has been an annual stop for those seeking Derby glory. Points are up for grabs to the first four finishers (10-4-2-1). Last year, it was Mike McCarthy’s Rombauer that won this race rather nicely. Of course, that colt went on to challenge many of the best along the Triple Crown Trail. His masterpiece was the Preakness, with Flavien Prat aboard. Even though a few years back, the GG contest lost its “Graded” status, it does not mean that it cannot be an important contest! Maybe, the 40th running of the “El Camino” can produce another winner on the Tapeta that can excite us!

Trainer Jack Steiner has this 3-yr-old colt by First Samurai ready to stretch out from running in sprints … mainly on the AW at Golden Gate. While he has an experienced jockey aboard in Antongeorgi, it is going to be a tall task to come away with a victory in a spot like this one. Looking elsewhere is totally logical, especially considering this race is 9F.

Here is a well-bred son of American Pharoah that is looking to get back on track after a 4th place finish in the Sham S. (G3) back at Santa Anita on New Year’s Day. The colt is full of promise after racking up 7 total starts to date (mainly as a turf miler). Doug O’Neill is quite masterful at shipping in for big races, even though his overall numbers do not look that inviting. I believe that this one has a major shot to win, and Abel Cedillo comes up from SoCal to take the mount. Rested and ready for the rest of his ’22 campaign, do not be surprised to see this talented colt in the Starting Gate on the “1st Saturday in May.”

Trainer Tim McCanna is a local man with some excellent GG numbers—152/37-29-16, 24%). I would not write him off, especially since he knows this local spot, through and through. Whether this son of Uncaptured is ready for this kind of company, remains to be seen. What we do know is that expert rider, Armando Ayuso, gets the call, and he already has visited the winner’s circle in nearby San Fran. Would be nice to see a local runner make good …

Interestingly enough, HOF trainer Bob Baffert only has 2 wins in the “Camino.” One occurred just 2 years ago with Azul Coast, while the other was back in the late 90s with Cavonnier. He once again makes the trek north, and this time around he has a strong looking entry by Quality Road. This colt was set for a turf race on Opening Day at Santa Anita, but instead, he was forced to the MT. With Johnny V in the irons, that effort was not too shabby … winning by 1+ lengths. After a month off, his works look promising, and I am sure the powerful consortium of SF, Starlight, and Madaket, are happy to see him return to the track. With old hand Edwin Maldonado guiding him, he could be a player late in the game. It's Baffert after all … racing in California.

A Cat Burglar colt is going to try and steal this $100k event, and he is going to need all of his special skills to pull off the feat. Felix Rondan is hoping that his charge is ready because he is going to need his best career effort. Santos Rivera is pretty average at the Gate, but maybe he can pull a rabbit out of the proverbial hat. This 3-yr-old just does not have the requisite class after a 3rd place finish last time out in an OC50k.

Both Evin Roman (jockey) and Jonathan Wong (trainer) know the pressures that come with racing against the best that SoCal has to offer. They have made a good home up at Golden Gate, and both are always towards the top of the Meet Leaderboard. Roman rode this colt by Temple City to victory 2 races back at Golden Gate in a $75k “Non-G.” Wong then decided that the runner could take on the turf at Santa Anita. It did not go well—7th. Coming back into a spot like this one, even with this pair’s propensity to win, seems to lean towards … a long shot.

Here is another local GG runner that is trying to go up the ladder, and take on some tougher competition. We have not seen this son of Fullbridled since early December, so if you are going to back this boxcar-priced 3-yr-old, then you better believe he can rate off-the-bench. Felix Rondan is a perfectly adequate conditioner, and Pedro Terrero has a solid Fields Meet going. However, these waters are pretty deep.

There are long shots in this race, and then there are really long shots … this one is the latter. A gelding by Clubhouse Ride, a would not totally write him off because of this bloodline. Still, those are really built for sprinting, and I think that is really what this Dan Franko entry needs to be doing. Would be a gift to get 4th, in my estimation. I am being kind.

Maybe this gelding by Tourist is named this for a reason … the El Camino Real seems to be a bit of a reach. Maybe Bill McLean will surprise us, and who doesn’t like Irving Orozco. That jockey has a sentimental place in my heart, when I used to bet him 6-7 years ago. He produced some winners, let me tell you. I do not see this entry hitting-the-board though, and this just seems to be too tough, based on his class rating. Like Randy Moss says … and Cris Carter before him … c’mon man!

A few stats stick out when surveying this Jose Bautista runner. I like the fact that this son of Shackleford ran on nicely last time out going 1 mile in a MSW Co. contest. A Speed Fig of 86 was more than respectable, and I like the idea of putting this one on any exotic ticket. His price is going to be big, and I am rooting for Alejandro Gomez. Maybe he can flip the script …

Doug O’Neill took a page out of Baffert’s uncoupled playbook, and is sending another runner into the fray. After some Derby Points? Or just looking to compete? Whatever the reason, this local colt that is well-bred by Uncle Mo could be one to consider as an "outsider." Ruben Fuentes is an experienced jockey, and clearly knows how to handle this “late-running” 3-yr-old. His mount is 3/1-2-0 @Golden Gate, and that qualifies him as a “horse-for-the-course.” O’Neill has a plan for this one … count on it!

Join us Saturday for all of our San Fran selections! Should be a great set of races from Golden Gate Fields! Don’t forget to follow us on Twitter … Horseracing_USA !!!