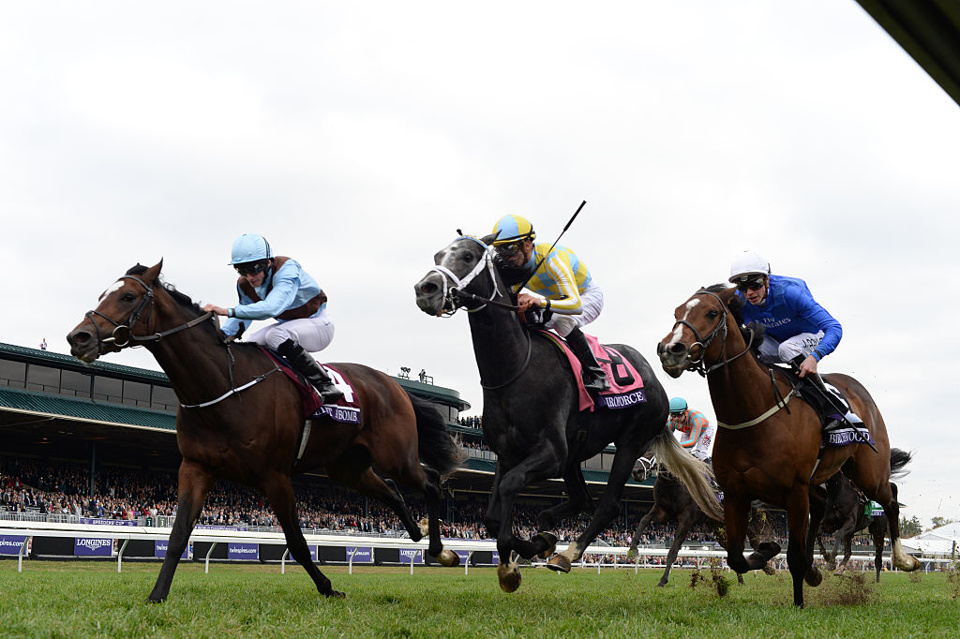 A distance test will be the feature at Keeneland on Saturday. See what kind of hand Mike Maker plays as he brings 3 solid grass routers to Central Kentucky for this Grade II event.

Over the past 5 years, some of my favorite deep turf routers have collected a tidy sum at the conclusion of the Grade II Elkhorn Stakes. Those include 2016-Da Big Hoss, 2017-Itsinthepost (FR), 2018-One Go All Go, 2019-Bigger Picture, and last year, 2020-Zulu Alpha. Three of those 5 winners were trained by Mike Maker, a conditioner who needs no introduction. The quality of runners that emanate from his keep have become vernacular, and are woven into each major event, especially if it is on the grass. Once again, he comes to Keeneland with a strong hand. Can he do it again?

In the North American male division of turf routers, this 7-yr-old is near the top just based on the class of horses he has competed against. There are some nice performances to be found, to be sure. Rarely does he run a poor race, and that speaks to Maker’s consistency. I think this is one of the trainer’s best, and that is saying quite a bit. With Tyler Gaffalione back aboard, the Three Diamonds ace looks to be on tap as one of the prohibitive favorites. Just so . . .

Trainer Phil D’Amato will venture eastward if there is a juicy turf race to be had. This one qualifies. After getting this one from the capable Canadian trainer Gail Cox, the SoCal-based conditioner has entered this gelding in 3 turf distance contests at Del Mar, Gulfstream, and Santa Anita. The Pegasus WC Turf was a miss, but the other 2 tries showed major foot down the lane. If he can ship into Keeneland, and Luis Saez can give him a steady trip, he might have a major chance to make some noise late.

I liked this McPeek charge at a price the last time he was Keeneland in the Fayette (G2) last October. That result ended up being a miss on the dirt, but he returned a few weeks later for a nice score in a OC150k at Churchill. It seems like every time his trainer tries to send him up the ladder, he just doesn’t seem quite ready. I don’t think this son of Scat Daddy will be unable to handle the distance . . . that isn’t the issue. Can Brian Hernandez position him properly to have a chance for a score. Once again, the Lucky Seven Stable entrant will be nice odds.

The Ramsey’s bred yet another offspring of Kitten’s Joy, and shipped him off to yet another owner. Some of the luster seems to have worn off this sire, as his numbers appear to be slipping. Still, the Ramsey Legacy continues on. Mark Casse took over training this gelding from Kelly Breen, and continued to try him in higher OC events. It was only back in March that he produced a win. That race at Gulfstream Park was a pretty short field, and it appears he got a dream trip. Now, the waters deepen, and I am not so sure this one is ready for the “Makers.”

Here is another Mike Maker runner who is brand new to the organization. Bred by Juddmonte and out of Frankel, this 7-yr-old was 4th to gatemate Epic Bromance #5 @GP. Then he was under the watchful eye of Saffie Joseph, and before that he was trained by Danny Gargan. Maker’s numbers with first-after-the-claimers are not too shabby, so you never know what is going to happen with one like this. The real wrench is the fact that Joel Rosario gets the mount. I don’t normally think of him as a deep distance rider, but then again, American jocks hardly get the chance to ride in races like these. Wager at your own peril . . .

The 3rd Maker entry is just as impressive as the 1st that was mentioned in this report. Here we have a son of English Channel that was absolutely stellar in the McKnight (G3) 2-back at Gulfstream Park. That signature win was followed by a 2nd place against a good field in the MacD (G2) in late Feb. New jock Gerrardo Corrales replaces Gaffalione, and doesn’t get many chances like this one. Maker is entrusting him with one of his seasoned senior stars, and that speaks volumes about his trust in the rider. Could we be looking at Three Diamonds Exacta? Good shot . . .

Towards the end of the Aqueduct November Meet, which includes a few weeks of turf racing, there was no better performance by a grass runner than this Shug horse. The son of Medaglia d’Oro lived up to his pedigree in the Red Smith (G3). He bested 10 others, including Red Knight #10 and Ziyad. Making that jump into G3 Co. isn’t easy, but this HOF conditioner knows how to do it. Coming into the Pegasus WC Turf, he was up against a tough group of runners that included Cross Border #1, and the eventual winner, Colonel Liam. A 10th place finish, out of 12, was disappointing considering the trajectory he had previously displayed. Now, off a break, he is back and ready to go. How sharp is he going to be for Johnny V? Tough to know is one suitable answer.

Jeff Bloom, of the Racing Stable of the same name, is no slouch when it comes to investments. As a former SoCal jockey, he has a keen eye for talent. On behalf of the syndicate, he has put stock into this Argentinian import, who has some major “Graded” experience under his belt. These runners that hail from the Pampas, and more specifically San Isidro, are distance specialists. Over the years, the ones that have come to America can be impactful. Ignacio Correas has trained some fine routers, and he looks like he has tried hard to round this son of Strategic Prince (GB) into form. It will not be an easy place to start, but Bloom Racing doesn’t shy away from a fight.

Lately, the Calumet Farm homebreds have plied their trade out on the tracks of North America. The outcomes have been mixed, but it is good to see what was once this great name in racing on the mend. Since switching to local Kentucky trainer Jack Sisterson, this 6-yr-old horse has notched a pair of 5th place finishes down at Gulfstream Park. Those were by no means easy contests on the turf, but considering the bevy of experience this one has faced when he was with Todd Pletcher, one might expect a more competitive outcome. Late days for this one? Here is the opportunity to make a statement otherwise . . .

This Trinity Farm homebred, trained by HOF conditioner Bill Mott, looks poised for his 2021 debut after quality works at Payson. He has amassed quite a nice record over the years (22/8-7-1), which includes career earnings on the turf to the tune of $711,358. He appears to keep getting better with age. The last time he was at Keeneland, James Graham took him across the wire first in the Sycamore (G3), the “Fall Stars” counterpart to this race. The layoff is a bit of a concern, since he has not been seen since finishing 2nd to North Dakota #7 in the Red Smith (G3). Trip notes tell the tale that he is a late surge specialist, and if his jock Graham can once again put him in the right position, he might vie for the win.

Join us Saturday for all of our Keeneland selections! Should be a great set of races from the tradition that makes Central Kentucky so special!