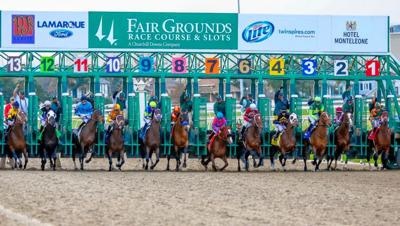 The Fair Grounds has a full slate of races on Saturday as they prepare for Louisiana Derby Day ... coming soon! Check out these selections below ...

The Fair Grounds "long stretch" returns for another weekend! March is rolling along, with stakes races aplenty. We are headed towards Louisiana Derby Day! On Saturday, we have you covered with all 10 races on this card.

I know it might not seem like it based on the M/L odds, but this horse by Acclamation (GB) is clearly the classiest runner in this field. Dropping in class for Paul Brown (who has a small stable), he is a veteran of all kinds of turf situations. Back at Keeneland in late October, Sophie Doyle rode this one to a 2nd place finish in one of those tough ALLW Co. contests at the beautiful track. Since then, he has stepped into BT races @FG and last out at Turfway Park. Neither of those attempts truly exhibited his talent, and I think this is the drop to bet. Gabe Saez is back in action at the New Orleans oval, and he has the ability to put forth a quality effort. The time off only benefits a runner of this age (7-yr-old), and I love the price … 8/1 on the M/L. Nothing like a best bet, and a value play … all in one!

Did you know that Fast Anna is a male horse? Yep … Here is one of his offspring who clearly did not care much for the Stall Turf Course at the Fair Grounds last time. Al Jr. is sending this 4-yr-old filly back to the dirt, and I welcome the choice! Even though Colby Hernandez has cooled off a bit, as the Meet enters its final month, he can still get the job done. The key to this one’s success is a great break, and if she can control the pace upfront, I think this contest could be hers. There is no question this is a class test because her prior success came against MSW Co. When this jockey-trainer combo gets together, they can really be quite destructive. What a pick!

The home of the long stretch … The Fair Grounds architecturally is supposed to support those runners that like to kick on for home! In this OC50k event we have a solid group that is drawn-in. When it comes to a favorite, I am sure the regularly over bet Brad Cox entry will garner mass attention. Gunfighter #2, owned by Gary and Mary West, has some major appeal, especially if you go back to that MSW Co. debut at the Fair Grounds back in January. In fact, in his last 2 races he has been forced to face his compatriots; first, Maasai Warrior, and then Cyberknife. I am sure the son of Ghostzapper will have a much better time of it in this spot. My issue is not that this runner is not capable … he is with Colby Hernandez in the irons. Rather, the question of value … there isn’t much that is going to be here. Maybe 3/5 … sounds right? Let’s use him underneath on an Exacta, but I want to put Paul McGee’s Zippin Gigi #4, Steve Asmussen’s Presidential #5, and Eddie Kenneally’s We All See It #7 on top. Of these 3, I am partial to Eddie K’s entry … the colt by Street Sense is used to this level, and he was really up against it last time. If you have not heard of Zozos, then you have been living under a rock. That colt could be Cox’s ace for a Derby run … TBA … As for #7, he gets Deshawn Parker in the saddle, and will enjoy coming back to a stretch run that he feels comfortable with … just look at those prior attempts! Hopefully, he can rate nicely, and have a shot to take over the lead late in the game. Here is how I intend on playing this one … best to you!

Enjoy the hospitality that is New Orleans! Best of luck at the Fair Grounds! Don’t forget to follow us on Twitter … Horseracing_USA !!!