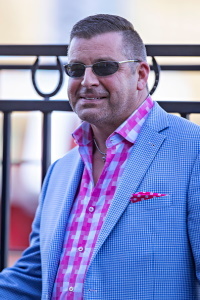 Trainer Robertino Diodoro has a nice entry for the Fantasy Stakes. See what her chances look like as we preview the Grade III race that has Kentucky Oaks Points on the line!

The Fantasy Stakes, a Grade III event at Oaklawn Park, is a major stop on the Kentucky Oaks Trail that will be run the last Friday in April. Looking over the past winners is a Who’s Who of filly royalty. Last year’s winner, Kenny McPeek’s Swiss Skydiver, ended up becoming the Eclipse Award recipient after a stellar run that saw her ultimately winning the Preakness Stakes in October. Eight Belles, Rachel Alexandra, Rose to Gold, Sugar Shock, Sassy Sienna, and Lady Apple are just a few of the names who won the Fantasy. Who will earn 100-40-20-10 and apply that towards entry into the Oaks at Churchill Downs? This is their last chance!

Trainer Jerry Hollendorfer has received his share of bad press over the past few years, and the horse racing “Court of Public Opinion” has offered mixed reviews on his status. He keeps at it, and sends a young filly into this race with hopes that she will make a class leap. Even though she was formerly trained by Kenny McPeek, with 2 races under her belt with Hollendorfer, they were both wins. The issue is that even though they were at Oaklawn, those contests were an MC30k and an OC30k. Still, wins are wins in Hot Springs. Having some semblance of regularity is good, since jockey Francisco Arrieta is back for the 3rd time to ride her. She is going to need a massive effort, and that may just be too much for the offspring of Shanghai Bobby to muster.

It was not that long ago that Robertino Diodoro’s Oaklawn operation was shutdown by that giant winter storm that blew through his Arkansas base. He eventually got back on track. This filly was resting up during it all after running 3rd in an OC62.5 sprint back on 4 March. When the PPs offer an editorial like “no late punch,” they mean it. Now this daughter of Laoban is going to have to stretch out against a tougher G3 group that is drawn in here. It will not be easy, no matter how sharp that on-track work was last week. David Cohen’s riding continues to progress, but this is a major class jump at a distance that she has yet to try.

Trainer Phil Bauer does not test the “Graded” waters often, having only run in 6 of these types of affairs in the past year. Clearly, he believes that this filly out of Violence can take on these rivals and win the day. Going 2-back in the Martha Washington 200k, which also had Oaks Points at stake, she seemed to be traveling backwards. Finishing 4th was not terrible, but remember, that was only a 6-horse field, and she was 12-lengths from the wire when Will’s Secret won. Bauer dropped her back to serve the dual purpose of getting her another race before this G3, and the effort also infused her with a confidence boost. At this juncture, I am unsure of just what kind of ability she possesses, since that “Martha” try was so poor. Is she meant for greener pastures? My sense is… no, but you never know about these types. They are awfully sneaky.

Here is the first of 2 runners from Brad Cox’s establishment. When it comes to class comp, this filly out of Commissioner seems poised to score against a field like this one. I honestly think this might be a weaker group than the Honeybee (G3), in which this one finished 5th. Her main rivals from that race are back in here, so she will have a chance at some recompense. Cox’s numbers are incredible, so this might be a value play, since most will look at her last contest with a fair amount of skepticism after a lackluster 5th place ending. I would consider betting this one, especially if she ends up being 8/1 or higher. That may not happen, but make sure you keep tabs on the tote. Though Fernando De La Cruz does not have a stellar route record, when he does occasionally work with this conditioner, it can be impressive.

Of the young upstarts in here, this is the one that I am most excited to see run. Dallas Stewart just got back from running in Dubai, and though he might have some jet lag, this Tapit filly is ready roll. She has slept well, and last time in one of those tough OP MSW86k events, she won with some good energy. Who doesn’t like to back the craft veteran trainer? Switching jockeys from Jon Court over to David Cabrera is a fine move, if the less seasoned rider can get this one home. Always when you see a homebred, that raises the proverbial eyebrow. Willis Horton Racing has the makings of a good one, if she can take to the track once more with an able-bodied break. She absolutely needs to be near the engine.

When it comes to pool money, this Brad Cox 3-yr-old will take a good bit of it. Out of Munnings, she was bred and is owned by the powerful Juddmonte Farms. The pink/green/white colors of that excellent establishment continue to muster a global footprint, even after the death of their patriarch. This filly has class, and a pretty nice record. Though she failed to win the Honeybee (G3) that is no reason to shy away from considering her to have major ability. Joe T. climbs aboard for the 2nd time, and even though he is not having the best meet, he can pull off a “win” for Cox. The fact is, she has never really secured the lead, and held it, so that will be essential, in order to have a shot against some powerful opponents. If her fitness is there, then she should be able to pull it off for Juddmonte.

We have homebreds drawn in spades here, and that speaks to the strength of this short field. Stonestreet Stables and Steve Asmussen enjoy working together. They form an alliance that produces its fair share of wins across the Southwest Circuit. With a Tapit filly, you know the bloodlines will invariably lead to accomplishment. Last out, when she battled in the Honeybee (G3) she encountered some traffic, but she navigated it well to a “Place” score. At 19/1 odds, that was impressive effort, and now she is getting an even more aggressive rider in Ricardo Santana Jr. Asmussen thrives in spots like these, and going head-to-head with this lot, only gives us racing enthusiasts more to cheer for, once the top of the lane arrives. My only qualm is her class level, especially when you compare it to Cox’s 2 entries.

Join us Saturday for all of our Oaklawn Park selections! Should be a great set of races from Hot Springs!