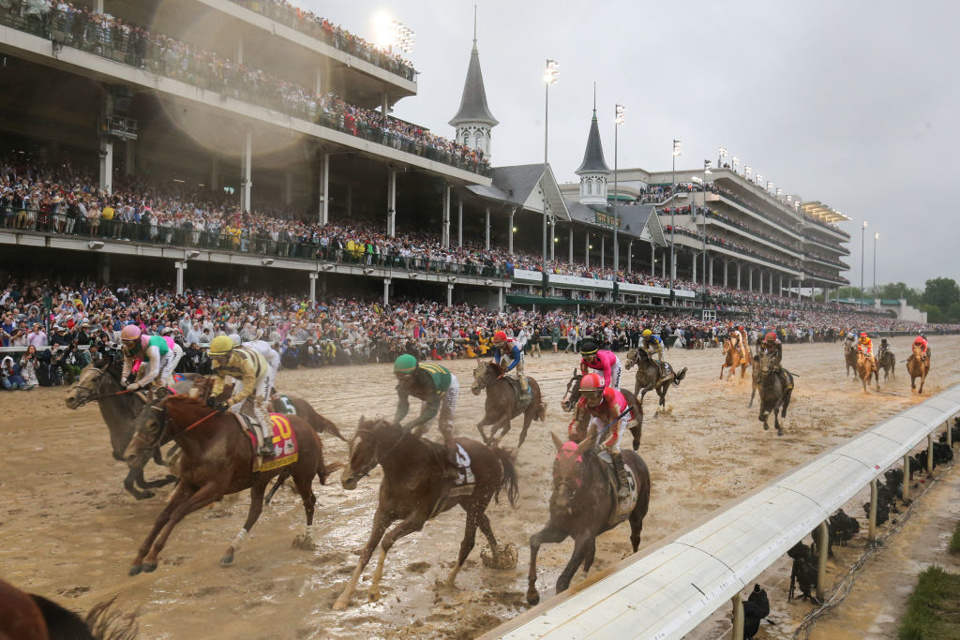 A staple on Closing Day at Keeneland, the 2021 edition of the Hagyard Fayette for 3-yr-olds and up came up tough this year. Check out which alum from the 2019 Kentucky Derby (pictured above) has the inside track ... can you guess who it is?

The final graded stakes of the October Meet is this race … the Hagyard Fayette. A G2, it is named for the county where Keeneland resides, and is sponsored by the excellent medical institute that also is situated in the picturesque town in Central Kentucky. Historically, some impressive runners have visited the winner’s circle at race’s end … these include most recently, Newsdad, Race Day, Noble Bird, The Player, Tom’s d’Etat, and last year’s victor, Mr Freeze. Let’s not forget one of the greatest champions to ever grace a racetrack … Charlie LoPresti’s celebrated champion, Wise Dan. It should be another storied end to the Fall Stars Meet at Keeneland.

The former alum of the Dubai World Cup (G1) is coming to Keeneland with high hopes. Last year, during Breeders’ Cup Week, the son of Paddy O was pretty powerful the last 1/8th of a mile heading for home. He won nicely in that “Non-G” 150k race. Now, returning to Central KY, his trainer is hoping that he is fit and ready for action. Though he posted an impressive speed fig, he was no match for Art Collector in the Charles Town Classic (G2). If he can rate well with superb SW rider Ry Eikleberry in-town, then he might have a shot. Mild sleeper pick (no pun) … hmm …

One of a pair of Diodoro Racing stripes to enter in this spot ... this half of the uncoupled entry was in the keep of West Coast conditioner, Jonathan Wong. The son of Street Boss, this gelding looks promising, but maybe it would be more appropriate to start at a lower-class level? Coming to Kentucky and facing the likes of this group seems to be overshooting the mark. Chris Landeros has talent. He can show-up when you least expect it, and that is precisely what his mount is going to have to do.

If you are after a long shot in a race like this one, then Carlo Vaccarezza’s older colt fits the bill. By Liam’s Map, his record is primarily on grass, and he had some success at both Keeneland/Ellis dating back to last year. Now, on the class elevator, he is going to have to raise his game to the nth degree. Even with veteran rider Martin Garcia in the saddle, it is not at all going to be a piece of cake. Everyone likes a boxcar price, an underdog to root for, and this one is certainly that. Quite a bit to work out, if he wants to win a Grade 2

Here is one that qualifies … time … and time … and time again, as a “near miss.” The last time this Brad Cox runner was a victor, it came at Prairie Meadows during the COVID Summer of 2020. Since then, he has suffered loss after loss in some solid mid-level stakes races at tracks from Oaklawn to most recently at Saratoga. With Florent Geroux along for some of those “misses,” he knows what this 5-yr-old can and cannot do. Cox has to be at least a little frustrated with this son of Warrior’s Reward. Maybe he can get up in time … maybe not.

Here is another type that always appears on the outside looking in. A major talent, this colt by super sire Constitution has the ability to get the Classic or near-Classic distances. Maybe this all comes down to trip … Since he came over to Mike McCarthy’s outfit, he just has not had that extra zip to get there in the end. He tried sprinting, and then extended to longer routes. Maybe his conditioner hoped that a return to his origins would be just the ticket. The Eclipse Thoroughbred Partners are as good as they come, and it would be quite nice to see this one come to Keeneland and set things right. Right now, an intriguing selection with Javier Castellano in the irons ...

The Kenny McPeek 3-yr-old made a ton of noise when he was last at the Old Keene Farm back in April. He won in fine fashion; the Lexington (G3) on a day that was mighty sloppy. That was a “signature” moment, and bettors thought that he might be on a roll heading to the Ohio Derby at Thistledown. It was not his day in the end. He stubbled through Saratoga, not showing us much in the Travers (G1) up against “A” student Essential Quality. How good is he … no clue … his last at Churchill Downs in the “Non-G” 275k Bourbon Trail is hard to figure … Isn’t it? The son of Curlin won by an eye-catching 13-lengths. That is no small feat. With Brian Hernandez, who is having one of his best Meets ever, it will be interesting to see which “Fury” comes to Lexington.

This son of Noble Mission (GB) is headed to the Farish Farm in 2022 … you know it as Lane’s End. Before the former alumni of the 2019 Kentucky Derby (placed 2nd after the DQ of Maximum Security) rides off to the breeding shed, he has one more race to run … the Hagyard Fayette. Since his 3-yr-old campaign, he has wowed us with some impressive and gutsy performances. Coming into this spot, he will be very tough with leading rider, Tyler Gaffalione aboard. Loaded with back class, there is no doubt that he is more than just a contender. If he is on his game, then no one … and I mean it … no one will be able to best him. Shug McGaughey probably wants this one for the well-known connections … all he has to do is go run.

A formidable opponent, the other half of the Diodoro uncoupled entry really outran his odds last time in the Kelso (G2) at Belmont. Who knew that a 26/1 shot could make the jump from the “Claiming Ranks” into a Grade 2 affair like that one? Maybe Diodoro did … Whatever the case, his horse was up against Todd Pletcher’s (sans Baffert) Life Is Good, and coming in 2nd was a gem. Whether he can top that, with regular red racer David Cohen up, is anyone’s guess. Diodoro is a conditioner that should never be underestimated. Still, it is hard to make a case when it comes to class … this one is pretty short on it.

My super sleeper in this spot is this colt by Ghostzapper that has all of the tools to score an upset. Sure, he may not have the class rating as a 4-yr-old, but he has some interesting victories over his past 2 races at Churchill Downs. If Ricardo Santana can accelerate to attack speed, and keep his mount close, then he could have a shot. What will this one’s price be come post time? I am hoping for some double-digits that are in excess of 20/1. This is a 2020 KYD alum after all, and he still has the potential to go even higher. Greg Foley continues to be one of the Upper South conditioners that appears to be on the verge of a breakthrough. He has one to watch out for in this race … I spy a juicy boxcar price!

Join us Saturday for all of our Closing Day Keeneland selections! Should be a great finale from Lexington!