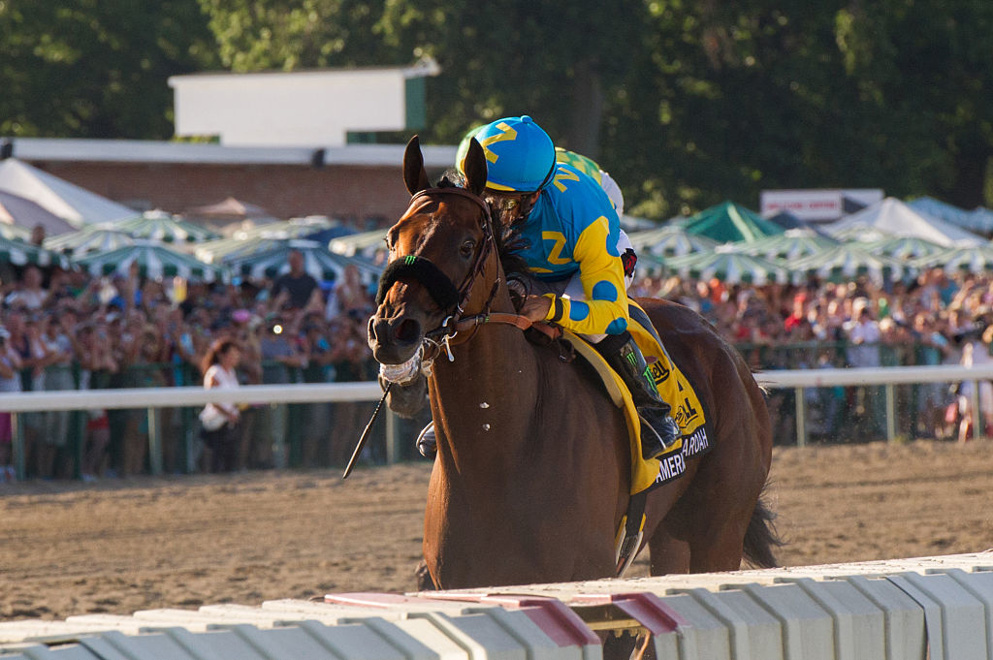 The 55th running of the Grade 1 Haskell Invitational represents the opportunity for 3-yr-old colts to strut their stuff, and vie for the opportunity to earn an “all-expense paid” ticket to the Breeders’ Cup at Keeneland in early November. A sort of “3.5” leg of the Triple Crown Series, the Haskell fits nicely between the Belmont and Travers Stakes (to be run in late August). A couple of years ago, the race served as the “coming out” party for Bob Baffert’s Authentic, as he won by a whisker over challenger, NY Traffic. That victory ended up being a springboard to the rescheduled Kentucky Derby in September, which led to a dominating performance in the Breeders’ Cup Classic at Keeneland. The ’21 edition of the race was racked with controversy when Midnight Bourbon lost rider Paco Lopez. Hot Rod Charlie was disqualified, and Mandaloun ended up with the prize. Another colt will take his place on the launching pad, if he can get to the wire first. That 3-yr-old will join winners that not only include Mandaloun and Authentic, but names like Maximum Security, Good Magic, Exaggerator, and the legend, American Pharoah.

The Gold Square show returns to New Jersey … a homecoming for the ownership. Their colt by Gun Runner is looking to rectify what amounted to a horrible trip in KYD148. If there was a horse out of the 20 that did not measure up to expectations, then Brad Cox’s 3-yr-old, who was up against that hot pace, was it (odds of 15/1). His powerful style of coming from off-the-pace is a major asset. If regular jockey Florent Geroux can channel some of that restraint that his mount exhibited in the Arkansas Derby (G1), then he might be able to match wits with this crowd. I am not sure that his last outing in the Matt Winn S. (G3) at Churchill was all that great. Sure, he ran nicely just off the speed, but this is going to be a much tougher test. Cox will have him ready … that’s for sure.

Bob Baffert’s year continues to be full of ups and downs. He served his 90-day suspension, and now returns to the track for his 1st major test. Maybe sitting the bench lent perspective … we shall see. Amr Zedan’s major investment is back at it after a spring that was short when it came to racing. Heading into the Kentucky Derby (G1) he only had a pair of races under his saddle. Tim Yakteen played the role of Baffert, and many wondered how the HOF trainer would have done instead. After what looked like an easy score in the Santa Anita Derby (G1), the colt by Gun Runner was tired in the “Run for the Roses.” The zip was decidedly absent in the end after that blistering set of fractions. Now, the brash Zedan is hoping that he makes a resounding return. With HOF rider Mike Smith in the irons, he was installed as the M/L … a plethora of guffaws followed. Baffert or not, I do not think the colt has the chops.

The last time Paco Lopez competed in a Haskell Invitational he was almost seriously injured. The controversial jockey takes the stage once again, and this time around he is not going to be aboard as accomplished a runner as Midnight Bourbon. The John Stephens trainee is a New Jersey bred that is going to be underwater against such a formidable group as this. Still, it is great to see local runners compete in such a celebrated race as this one. The class jump is pretty extraordinary here, and even though the gelding by Micromanage was in a NY Stallion S. turf race at Belmont in mid-June, that hardly constitutes experience. There is a reason that he is 30/1 on the M/L. Just hitting-the-board would be an accomplishment. Lopez has a strong Monmouth record, and his mount does have 4 attempts over this surface … solace, I suppose.

We know that Dale Romans knows Thoroughbreds, and he has a wealth of knowledge when it comes to the conditioning trade. Over the years though, his grip has suffered, and he just does not seem to garner the respect that he once did. He is going to keep trying, and he comes to “The Shore” with this son of Not This Time. The colt does have 3 wins in 7 lifetime starts, which is a positive. As a 2-yr-old, he made some noise in his 1st pair of races at Churchill Downs. The Street Sense S. $200k was a high-water point in his career. Since Halloween of last year, he has had a tough time making much headway. An OC100kn3l under the Twin Spires was solid … winning by 5-lengths against Kenny McPeek’s Rattle N Roll. Regular rider Joe Talamo is going to have to dig deep to steal this race because it is not going to be easy whatsoever. Getting loose will be key, and so will controlling the time up front.

Another local Monmouth runner is going to try and flip the script at what should be a massive price. Trained by Greg Sacco, a conditioner with a smaller stable, this son of Palace Malice is really going to be up against it. Competing in the prep for this race, the Pegasus S. $153k, he ended up dead last … Home Brew was already in the winner’s circle by the time he crossed the wire it seemed. Nik Juarez is a rider with knowledge of how the surface plays, but he has yet to ride this one for Sacco. Running in MC Co. at Aqueduct over the winter probably did not prepare this colt for what he will run against in this spot. Nothing like a long shot … this is one for sure.

The good folks at C2 Racing are partners with La Milagrosa Stable, and they both invested in a good one. A son of Race Day, he sure did shine in the Florida Series at Gulfstream Park. Scoring in both the Holy Bull S. (G3), and the Florida Derby (G1) proved that Saffie Joseph could train with the best of them. He bested Todd Pletcher for the title in South Florida, and that is not easy to do. Coming into the Kentucky Derby, the beautiful grey looked like a sound sleeper pick. However, like a good number of closers, he got caught up in the hot pace. It was just too much, and there was no way he could rally. With a sound set of works on the tab at his Gulfstream home base, he should be fit for the trip up the coast. Joseph is making the move away from Tyler Gaffalione, who is up at Saratoga, and going with a worthy substitute in Joel Rosario. The reigning Eclipse Award winner just needs to track the pace effectively. That’s the plan … a pace meltdown? Yes, please …

If there is a criticism of Chad Brown’s son of Munnings, then it is the distance question. Can the colt go further than he ever has? Injured just before the Breeders’ Cup Juvenile (G1) at Del Mar, this one missed the entire Derby Trail. His talented conditioner had him ready for early May, and he proved himself admirably. That score in the Pat Day Mile (G2) was nothing short of impressive, especially when you consider his last race was early October. Brown then targeted the Woody Stephens (G1) on the Belmont Stakes undercard, and he blew away the field rather easily. With Irad Ortiz staying put at Saratoga, his brother Jose will take over. With an undefeated record on the line, I don’t see why he cannot stretch out. His level of talent is absurd, and who knows how well he could have performed along that Derby Trail … the one to beat in my mind. Are we looking at a potential BC Classic (G1) winner? Stay tuned …

On the outside looking in … literally … this colt by Gormley is coming off a win at Monmouth in an OC16kn1x. I will not say that he has “no chance,” but it is highly-unlikely that this 3-yr-old can win against a field like this one. Jesus Cruz is going to put his colt out there, and see what happens. The able-bodied ace of the track, Angel Rodriguez gets the call, and he will need all his know-how to get this one home. There is just too much firepower in the Haskell … being in-the-money would be a worthy goal, but it probably will not happen. Dare to dream in a sport like this one …

Join us Saturday for all of our Haskell Day selections! Should be a great set of races from Monmouth Park! Be sure to follow us on Twitter … Horseracing_USA !!!