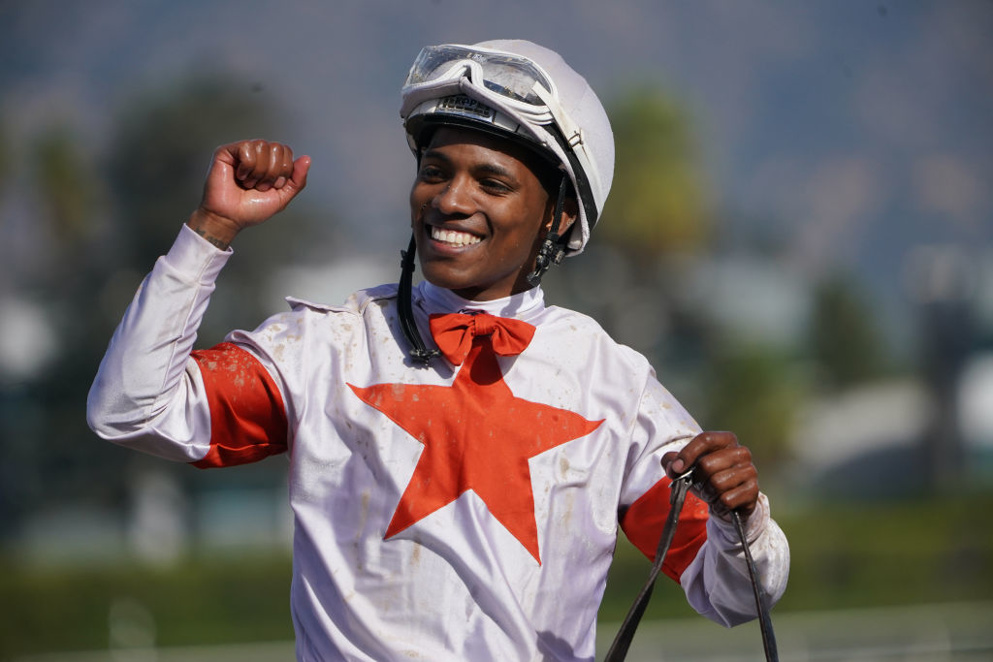 Jockey Ricardo Santana might be riding the winner of this Saturday's Grade III Honeybee @OP. See what our J.N. Campbell thinks of his prospects as he previews the field...

Oaklawn Park has a strong trail for 3-yr-old fillies that leads from the Martha Washington through the Honeybee, and ends with the Fantasy. That middle race is up next, and at stake are 50-20-10-5, which will be applied to entry into the Kentucky Oaks. Past winners have included a celebrated group of recent routers like Terra Promessa, Cosmic Burst, Chocolate Kisses, and last year’s winner, Shedaresthedevil. Who will join them this year?

Kenny McPeek sends this filly into Oaklawn after she has 2 really nice starts in the new year at Gulfstream Park. Both those races were a tale of 2 different trips. That last effort was a strong “sent” kinda of run; yielding a 93 Beyer fig which was quite a statement. This conditioner continues to develop as a “filly” 3-yr-old specialist. If this daughter of Candy Ride can raise her game, she has the potential to be a really destructive force against some of these “social betters.” I like that David Cohen gets the call, since he is a jockey that doesn’t always get his due. Big chance to move forward.

The winner of the Martha Washington 200k is back for trainer Dallas Stewart, after a convincing score in late January. Rested and apparently ready to go, this daughter of Will Take Charge has the ability to power down the lane late. She won by a nice 5 lengths against Coach #8, who is also back in this one for Brad Cox. If she can put on a show like she did last time, then this race might be hers. Getting John Court to ride is a plus as he tries to give Stewart 3 in-a-row. My only concern is regression because this is clearly going to be the toughest race she has ever faced. From a betting standpoint, you might want to look elsewhere for some value. I am going to…

It is unbelievable to think that Steve Asmussen has over 2600 starts in the past year. Almost 500 of them are in “Graded” affairs. That is power you cannot buy; it is attributed to hard work, organization, and maybe, some good fortune. In this spot, Asmussen brings a daughter Nyquist back into another OP race. That sire has sparked some debate, and made watchers take notice. It will be interesting to see how his offspring fare over the next couple of years. A score by Santana in this spot will help the cause. She is lightly raced, and that can play both ways. Does it mean she is rested or does it mean her fitness level is not exactly where it needs to be. She was not a cheap purchase back in 2019 at the Fasig Sale in August--$400k. Expectations are high for the Lieblong ownership pair. To my eye, she needs some more lines on her resume. You must give it to her conditioner, he is not afraid to enter…

Brad Cox sends 2 runners into the HB @OP, and here is the one with the least amount of class. This Munnings filly missed last out running down at Cox’s base at the Fair Grounds. She just did not have the gas left in the tank before that last turn. I find that concerning, especially on a speed favoring track where being on the front is key. Her conditioner is fabulous at making adjustments, but I question whether Joe Talamo can put this one in the right spot for the final push, and I also question the stretch out in distance. Does she like to come from the back? Rate mid-pack? I am not sure. Her prior races to that dud, were stellar. She won by 12 lengths 2-back! So, she might just have to be your wildcard. Use her in the exotics, or on top at your own peril. A Juddmonte homebred is hard to turn your back on, those colors maybe… naw… the rep!

The other Asmussen entry is a Stonestreet homebred that was excellent last out at the Fair Grounds in mid-February. It is good to see such a nice recent effort like that one. She rallied with alacrity, and distanced herself from the rest of the 8-horse crowd behind her. But these are deeper waters for this Tapit colt. That sire is tough to predict because some are temperamental and just do not have the ability to focus. In other words, they need more time. That is my sense when it comes to this one. She can be professional, but maybe just not yet. Francisco Arrieta has never ridden her, and that to me is a concern. She just might not be fast enough when it comes to getting to the wire first. Of course, she could be ready for a class jump. Either way, this filly has a bright future.

The world of Jerry Hollendorfer over the past few years has been turbulent and unpredictable. I have no real sense of what it’s like to be him. Some people trust him, while others remain skeptical about his past history. I for one, believe he has endured enough, and deserves a second chance. Thus, it is great to see him enter one of the members of his stable in a race like this one. As the trainer, his runner is the daughter of Raison d’Etat, but Hollendorfer is also a part owner. You do not see that much in “Graded” races, so it is an interesting angle. The filly is lightly raced, with only 2 under her belt. Her maiden at Los Alamitos was a solid opening, before she arrived at Oaklawn. Followed by a debut in Hot Springs that was clearly not a “wow.” Finishing 5th in an ALLW race, a favorite does not make in here… Needs more, way more!

Asmussen, Cox, and McPeek all play 2… Here is the latter’s other entry, a daughter of the great Bernardini. Her conditioner has had her hanging around his base in Florida, and it appears he was just waiting for the right opportunity to enter her in something that could work. This is not it. To my eye, it seems rather like an afterthought to bring her along with the #1. She could run a big race, especially after some of those efforts last fall on the Kentucky Circuit. But I am more than skeptical. I would rather see her come off the bench in a minor stakes race, than a G3 like this one. It is going to be tough to match wits with the likes of this group. Pleasure to see jockey David Cabrera doing so well after he made the leap from Sam Houston this year, but this one is a non-starter for me.

This filly, out of Commissioner, appears to be Cox’s trump card. She is not without weaknesses though. Her last effort in the Martha Washington 200k on this track was good, as she rallied to score a 2nd place finish. But she was well-behind Stewart’s #2 in that race. Perhaps the time off over the course of February allowed Cox to get her ready for this spot. There is no doubt she will vie for favoritism because of Cox’s popularity among the betting public. I want to try and beat her, but that might be folly if she can run like she did last year. Florent Geroux is this conditioner’s go-to rider @OP, and he has the ability to guide her home with moxie. Nothing like trying to best a really quality horse in a spot like this. If you get it right, it can translate to a major score.

Join us Saturday for all of our selections! Should be a great set of races from Oaklawn Park! Can we get some sunny weather? Come on!

The Race Card is below and the Morning Line odds will populate the card once available...

Kentucky Oaks Odds
TwinSpires Breeders Cup 2022 Promo Codes
By Mick Bates
TVG Promo Codes for Breeders Cup Weekend 2022
By Mick Bates
Saratoga Picks: Campbell's final puzzle on September 5
By J.N. Campbell
Kentucky Downs Picks: Rain reschedules card to Monday on September 5
By J.N. Campbell
Saratoga Picks: Spinaway S. superb betting race on September 4
By J.N. Campbell
Del Mar Picks: Flightline's moment arrives in the Pacific Classic on September 3
By J.N. Campbell
Kentucky Downs Picks: Mint Million for milers on September 3
By J.N. Campbell
Saratoga Picks: Trio of powerful stakes makeup final Saturday on September 3
By J.N. Campbell
Saratoga Picks: Smash Ticket gets her shot in the Prioress S. on September 2
By J.N. Campbell
Kentucky Downs Picks: Turf track in Bluegrass opens on September 1
By J.N. Campbell
Advert Disclaimer
Horseracing.net is a free online resource which endeavour to provide helpful and useful content and odds comparison to its visitors. Please be advised that Horseracing.net accepts affiliate commission from the companies appearing on the site, and agreed commission levels impact the location and order in which the companies (and/or their products) are presented on the website. Any ratings that appear on this site is determined by our subjective opinion of the brand but also based on market share and reputation, each brand's conversion rates, commission paid to us and general consumer interest. Company listings on this page don't imply our endorsement. We do not feature all providers on the market. Except as expressly set forth in our terms and conditions, all statements and warranties regarding the information presented on this page are disclaimed. The information, including odds, which appear on this site is subject to change at any time.
$200 Risk Free Wager
Place your first single bet on any race and get up to $200 back as wagering credit if your horse doesn’t win. T&Cs apply,21+
get offer
$200 Sign-Up Bonus
New Customers Only,T&Cs apply,21 +
$300 Deposit Match Bonus
T&Cs apply,21+,State Restrictions,use code 250MATCH for $250 matched deposit bonus