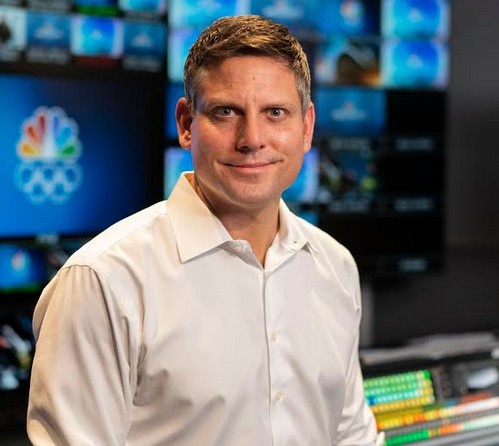 Rob Hyland has spent a career devoted to the production of sports. That pursuit of bringing intriguing, fast-paced broadcasts like the Olympics, Sunday Night Football, and Notre Dame Saturday are woven into the warp and weft of America. A major part of his diverse Emmy-winning resume also includes seminal Thoroughbred racing events like the Triple Crown and the Breeders’ Cup World Championships. On the eve of the latter, he took a moment out of his busy days and nights to chat about producing those elegant and unpredictable Thoroughbreds.

J.N. Campbell: Rob, thanks for joining me today.

J.N. Campbell: You have produced all sorts of sporting events for NBC; where does the Triple Crown fit into the pantheon of your experiences?

Rob Hyland: A major horse racing event, like a Triple Crown race or the Breeders’ Cup World Championships uniquely combines atmosphere, tradition, and competition. From a television perspective, perhaps the best comparison is the Olympic Games, as both attract event-driven audiences as opposed to sports-driven audiences. For most of our viewers, a race like the Kentucky Derby is likely the only horse race they watch all year. So, like the Olympics, we format the show specifically to capture the distinctiveness of the event. The party rages all day across Churchill Downs, Pimlico, and Belmont, from the raucous revelers on the infield to the blue bloods on Millionaire’s Row. There are many challenges to broadcasting a Triple Crown race, but I like to think that the way we’ve approached the challenges has played a central role in our success producing the event.

J.N. Campbell: Your Derby coverage was transformed by COVID putting you in a unique position to coordinate a whole new slate of logistics, equipment deployments, Zoom calls, and feeds. Talk about the challenges these presented and how your team adapted?

Rob Hyland: The complexity of the telecast is rooted in the notion that it is in effect an outdoor studio entertainment show disguised as a sporting event. Sure, we broadcast 30 live races over the course of the Triple Crown, but they only account for about 50 minutes of our 15-plus hours of coverage. So, the challenge becomes keeping the viewer engaged in between races. We do it with a wide range of elements: compelling taped feature stories produced by our Olympic profile unit, expert analysis, reporter contributions, live interviews, lifestyle pieces, and also the predictions of our handicappers who continually evaluate the contenders, particularly in the big race.

J.N. Campbell: Can you talk about the upcoming Breeders’ Cup and how you will apply what you learned to that major Thoroughbred event? What should we be looking forward to?

Rob Hyland: Horse racing isn’t limited to a defined playing surface, like a football field or a hockey arena.  Covering a horse race is closer to golf or motor sports in terms of the size and scope of the venue, and, consequently, there are technological and logistical challenges associated with formulating the coverage plan. Yes, the race action takes place on the track, but it’s off the track where we dedicate a majority of our coverage time. We deploy cameras, microphones and on-air reporters all around the grounds to give viewers the sense that they’re always in the best seat in the house. From the barn area to the paddock, the grandstand to the red carpet, the betting windows to the jock’s room, and even a camera on horseback reporter Donna Brothers’ helmet, we aim to capture every angle of this event.

J.N. Campbell: Good points and I appreciate those assessments. Before I let you go, I want to do some rapid-fire short answer questions.

Rob Hyland: Born and raised in NYC – Not fancy, but going with the Dog.

Rob Hyland: 2020 Kentucky Derby post-race celebration for Bob and his family. There was so much raw emotion in his post-race interview. Bob seemed overwhelmed in the moment of winning the Derby with Authentic considering he had his second contender, Thousand Words, scratch moments before the race and his longtime assistant, Jimmy Barnes, rushed to the hospital with a broken wrist.

Rob Hyland: 2019 Kentucky Derby – Luis Saez with Donna Brothers just before it was announced there was a claim of foul against Saez and Maximum Security.

J.N. Campbell: First word that comes to mind when you saw Thousand Words flip over in the walking ring at the Derby

J.N. Campbell: And those are some great responses. Thank you for your time, Rob.