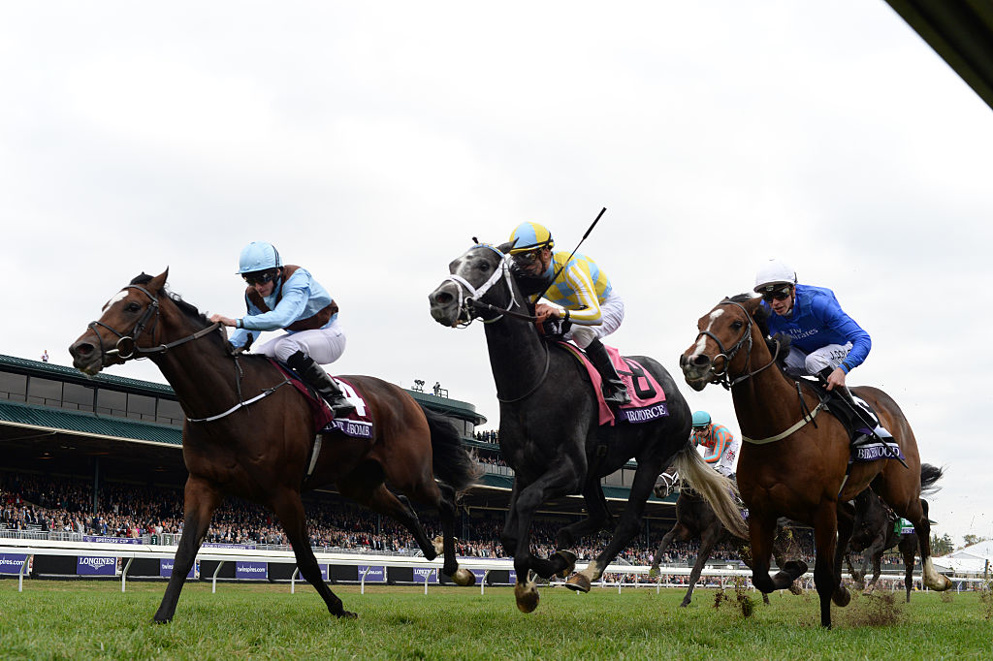 The final week of the Spring Meet at Keeneland begins on Wednesday with a solid eight-race card and a Pick 6 carryover of $66,284. As usual, our in-house handicapper has made picks for the whole card and additionally provided detailed analysis of his best value plays during the day.

It’s not easy to trust anyone in the opener. At one time I would’ve said Yamato (#4) is a cinch in this race, however his latest outing at this distance was poor and he doesn’t have any apparent excuse for that effort. If he gets back to the kind of performance we saw on December 17 at Gulfstream Park in a turf marathon I don’t think there’s anyone capable of beating him, but I’m certainly not counting on that at a short price.

If the good version of Yamato fails to show up then I think this race is wide open, which is why I’m siding with Lake Nakuru (#3). He’s in suspect form himself, but I don’t think he ran as bad as it looks in his last start when he completely missed the break, and he has back races that stack up favorably to this group. While he hasn’t been given many opportunities to go this far, he did run pretty well in a 1 ⅜-mile race at Churchill Downs as a 3-year-old. Ultimately, if he’s able to rediscover his best form here he’s going to be a major player at what should be a square price.

This is the first of two really interesting maiden special weight races on turf for 3-year-olds. This one is probably the more competitive of the two, but I’ve still honed in on a pair of colts I believe could have a real future. The first is Realm of Law (#10), a Juddmonte homebred with an impeccable pedigree who returns to the races for trainer Chad Brown. A son of War Front out of a graded-stakes winning mare, Realm of Law didn’t make much of an impression in his debut on September 20 at Belmont, however that really wasn’t an ideal spot for him as he got stuck behind a soft pace going six furlongs. The winner of that race came back to take a stakes race at Belmont in his next start, while the runner-up has since blossomed into a solid turf horse, so Realm of Law’s first-out effort is probably better than it looks. With the addition of Lasix and plenty of added ground in this spot, I’m expecting a much-improved performance out of him, though most bettors are likely to do the same.

Since I have a feeling Realm of Law could end up too short a price, my top pick in this race is actually Win Worthy (#6). In some ways he’s an even more obvious contender than Realm of Law having just finished a strong second in his debut on March 20 at Fair Grounds with a 74 Beyer Speed Figure, however I think he could fly under the radar a bit as bettors gravitate toward the shiny new toy. The speed figure isn’t extraordinary, but make no mistake, Win Worthy’s first start was very promising. He didn’t break all that well and sat in midpack before launching a wide rally around the far turn, swooping to the lead with haste by the time the field turned for home. Although he was ultimately run down by Hidden Enemy and had to settle for second, the winner seems to have some quality and Win Worthy stayed on well in the stretch to stave off the third-place finisher. At 5-1 on the morning line, I could see Win Worthy offering a good deal of value for trainer Joe Sharp, who’s been having a really good meet with a limited number of starters.

The second of the aforementioned maiden races, this one appears to revolve around second-time starters Snow House (#3) and Purple Dream (#6). Another Juddmonte homebred, the former is actually coming out of the same heat as Win Worthy, my top pick in Race 3, and got a dreadful trip in that spot as he was shuffled badly around the far turn and only got a chance to stretch his legs in the final eighth of a mile. When he did finally get an opportunity to run, he looked good doing it, and I like that he showed a good amount of early speed, which is going to serve him well here as he makes his second career start for world-class trainer Brad Cox.

Snow House is going to be formidable, but I have a feeling people are going to underestimate Purple Dream, even though he’s coming off a 78 Beyer in his debut on March 27 at Turfway. I don’t know if I wholly believe that number since the Turfway figures have proven to be a bit scattershot, but what I do know is that Purple Dream ran a terrific race that day as he missed the break and then put in a long, sustained rally to nearly get up to win. That effort becomes all the more impressive when you consider his pedigree, which is 100 percent geared toward longer races, especially on turf. As much as I like Snow House, if Purple Dream does move forward off his initial outing as expected he’s going to prove awfully tough to beat, and due lower-profile connections he may not get the backing he deserves.

Trainer Wesley Ward holds a strong hand in the finale with first-time starter Fine Prospecture (#1) and the fleet but inconsistent Tesorina (#11), however I’m going back to the Ben Colebrook well one more time with Watermark (#10), who ran a sneaky good race in her first start on March 24 at Turfway. A daughter of Maclean’s Music, Watermark broke slowly in that spot and may have been shuffled a bit shortly thereafter, leaving her in last early. She then moved up down the backstretch and continued to make progress around the turn and looked as though she was going to surge by in upper stretch before her protracted rally finally caught up to her in the final eighth and she flattened out. Based on that effort alone she’s a primary contender in this race, but her outlook gets even rosier when you consider Colebrook, who rarely has his horses cranked up to win first out and specifically targets races at Keeneland, where he currently has six winners from 16 starters. Watermark also adds Lasix for this race, which only bolsters the idea that big improvement is coming.