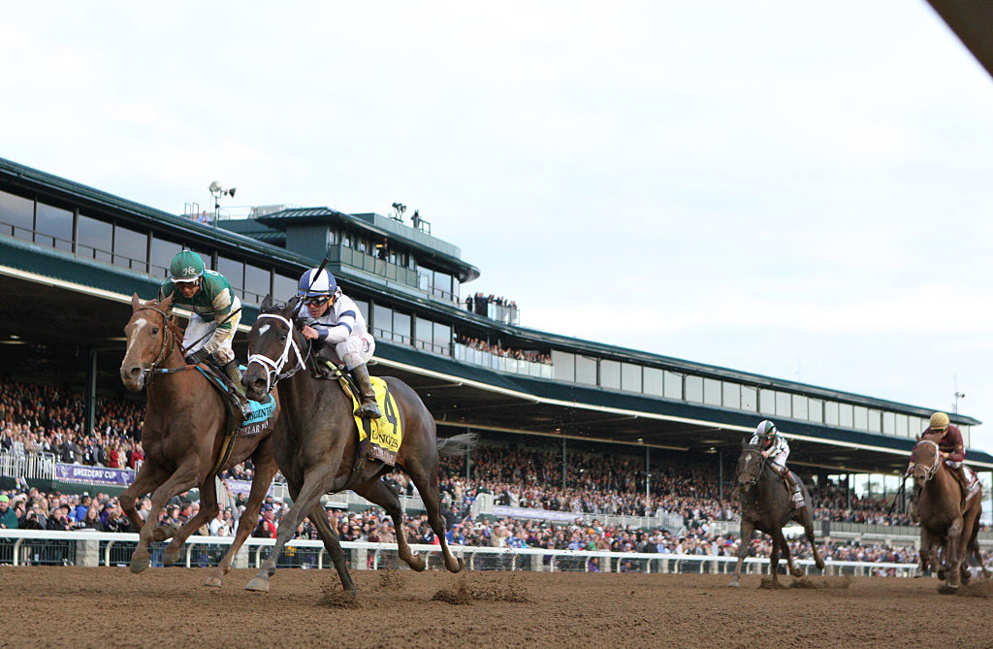 A perennial sign of spring, racing begins at Keeneland on Friday with a terrific 10-race card led by a trio of stakes races. Our in-house handicapper is raring to go with picks for the whole card and select analysis of his best value plays for the day, and he will additionally be going toe-to-toe with our turf man in a tournament-style competition throughout the meet.

Value is not in abundance on this Opening Day card at Keeneland, so when you find a potential overlay you have to take it. Given the relative strength of this field of turf allowance runners, led by a shaky favorite in Gear Jockey (#1), I believe Race 5 presents such an opportunity.

Gear Jockey is unquestionably the horse to beat coming off of a third-place finish in the G3 Canadian Turf at Gulfstream Park that earned him a 94 Beyer Speed Figure, but you have to ask yourself where that effort came from. This horse had shown potential as a 2-year-old, and even finished third in the G1 Breeders’ Cup Juvenile in 2019, but his development had been stagnant since that race until his shocking placing in the Canadian Turf. It’s going to take a lot of regression for Gear Jockey to get beat here, but I suspect that could happen as he strikes me as the type that runs down to his competition. Furthermore, this horse was on the better part of the racetrack for the majority of the Canadian Turf, and perhaps that’s the reason for his sudden improvement.

So if not Gear Jockey, then who? Falkirk (#7) has the credentials and speed to win, Azrael (#10) is an intriguing addition to the field, but there’s really no one that scares me in this race, which is why I’m going with first-time turfer Sounion (#3) as my top pick at 15-1 on the morning line. Sounion has been treated strictly as a dirt runner by his connections, however after some lackluster results at the Gulfstream Park Championship Meet they’ve decided to change course with him. His pedigree is a bit nebulous as far as turf goes, but he is a half to a stakes winner on the surface and Liam’s Map has been a pretty solid turf sire so far. I also find it encouraging that the best race of Sounion’s career came last fall on the Churchill Downs main track at a time when that surface plays kindly to turf runners. Sounion shows a sharp turf work on March 14 at Palm Meadows, and ultimately it would take very little improvement for him to beat this field.

An evenly-matched field of 3-year-olds has lined up for the Palisades Turf Sprint, unsurprisingly led by a pair from the barn of trainer Wesley Ward. While Fauci (#8) appears destined to be favored in this spot, it’s actually recent maiden winner Chasing Artie (#3) I like more, though there’s no guarantee he runs here since he’s cross-entered in a race on Saturday.

If Chasing Artie opts for that dirt starter allowance race he’s in on Saturday it would be a big mistake, in my opinion. It may seem as though this horse benefited from a cake trip to break his maiden last out at Gulfstream and merely held on to win, but consider that the horse that cut into his winning margin late was a very impressive next-out winner on the Gulfstream main track. I think Chasing Artie ran really well in that spot, and I like that he showed an ability to ration his speed after running off in a prior start at Turfway. The icing on the cake for me is that he’s going to be ridden on Friday by Joel Rosario, who is undoubtedly one of the best turf sprint riders in the country. It’s likely that Chasing Artie is going to need to come from off the pace in the Palisades Turf Sprint, and I have no doubt Rosario is the perfect man for the job.

I believe Chasing Artie is the right horse in this race, but I have to acknowledge Fauci is a formidable foe, though he may be forced to play bridesmaid again to a more talented stablemate, as he did in two starts to close out his juvenile campaign. Still, Fauci was running fast races as a 2-year-old and if he takes a step forward at 3 he’s going to be very dangerous.

Slumber Party (#2) is absolutely the filly to beat in the G3 Beaumont as she makes her much-anticipated second start following a smashing maiden win on January 24 at Gulfstream, however I believe she could be vulnerable in this spot. While her maiden win and the 86 Beyer she earned do hold up to scrutiny, I find it a little concerning that she missed all of the major Kentucky Oaks preps at Gulfstream and opts instead for this much softer spot. Based on a debut performance like hers you’d think her connections would be aiming high, especially in a year with such a wide open 3-year-old filly division, but this can only be construed as a conservative move. Furthermore, Slumber Party raced with Lasix in her first start but does not get it here, which could also lead to regression. Since she’s likely going to end up as a much shorter price than her 2-1 morning-line odds, I think it’s wise to take a shot against her.

Wesley Ward’s Twenty Carat (#7) is probably going to be the most popular alternative to the favorite, but I don’t love her races at Turfway. Instead, I’m far more interested in Farsighted (#3). This filly was beating very little in her sophomore debut in the Any Limit at Gulfstream, however she won with ease and I found it encouraging that she ran well fresh for the patient Rusty Arnold, who no doubt had this race in mind for her all along. Farsighted ran a couple strong races over this track last year, including a second-place finish in the Songbird on the Breeders’ Cup undercard, and I’m anticipating a career-best performance from her here. As the third or fourth choice in the wagering, I think she makes a ton of sense.

I doubt he’s going to be a very appealing price, but I have a strong preference for G1 Breeders’ Cup Juvenile Turf winner Fire At Will (#4) in the G3 Transylvania. Although Scarlett Sky (#1) figures to vie for favoritism with Fire At Will, I don’t think these two are in the same league. Scarlett Sky does own some impressive recent Beyers in turf races at Gulfstream, however I believe he’s completely dressed up off those performances. Two starts ago he may have won by five lengths but he was beating absolutely nothing, and while it appears as though the 86 Beyer he earned in victory was corroborated by a runner-up performance in the Palm Beach, I don’t think that race is as strong as it was given credit for. The winner Annex did come back to take another stake, but he regressed sharply in that spot speed figure-wise and I’m expecting a similar downturn from Scarlett Sky, who got a very good trip in the Palm Beach.

Conversely, Fire At Will heads into the Transylvania off a disastrous outing on the main track at Gulfstream, but I don’t think you can hold that race against him considering that he’s not a dirt horse. I don’t mind that his connections took a shot to see if they had a Derby horse on their hands, and I appreciate that they’re getting him back to what he does best straight away. Fire At Will won the Breeders’ Cup Juvenile over this course and distance to close out his 2020 campaign, and anything approximating that level of performance is going to make him damn near unstoppable.

To check out all the Keeneland Picks from the HorseRacing.net team then check out the table below...