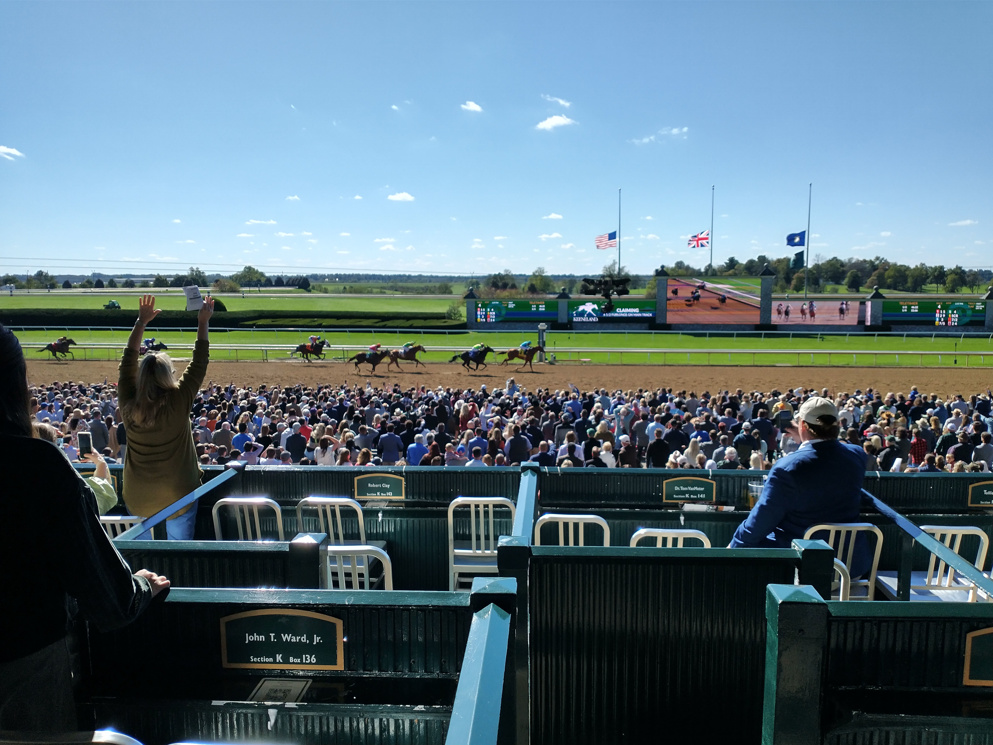 Keeneland's finish is almost here ... With 2 more days left, it is time to get those last bunch of winners. Check out these selections, along with an affordable Late P4 ticket for you to cash!

The final push at Keeneland this Friday is upon us! With only a pair of racing days left, it is sure to be a challenging one for even the most-seasoned handicappers.

Keeneland’s Friday Late Pick is off and running … heading to the soggy Haggin, we are looking for some live long shots because that is what turf heroes do. I know Mike Maker’s colt by Twirling Candy named Kiss the Sky #3 is the one to beat ... not qualifying for the aforementioned category. Going against this conditioner and leading rider, Tyler Gaffalione, appears to be specious reasoning. When the offspring of Twirling Candy take to the turf, it is time to sit up and take note. This 2-yr-old has all the makings for what could be a promising 2022 campaign … For those reasons, I think it is time to “Single” right off the bat. I do not see any rivals in this spot that have as solid a chance as Maker’s charge. Of mild interest is Kevin Attard’s Be Like Clint #4 … even though he has never had the opportunity to get on the turf, this runner has shown some promise. Attard does not come to Central Kentucky all that often!

I offered up one “Single,” and now I think that I have another one … Todd Pletcher is now officially in the Hall of Fame, but he is not resting on his laurels. Last out, I foolishly thought that his runner, Jester Calls Nojoy #1, had a chance below the hard deck against Steve Asmussen’s powerful 2-yr-old Echo Zulu. It was not to be … Still, that doesn’t mean that Pletcher’s entry cannot comeback from that defeat in a big way. This “Non-G” appears to be just the ticket, and heading back to sprinting is a sound plan. This filly by acclaimed sire Maclean’s Music seems like an easy call, especially since her level of fitness is sound. The Elkstone Group bred this one, and is hoping she can make some noise as we head into the new year. Is she a sprinter or a router? Stay tuned …

After a pair of “Singles” in the first legs of this Late Pick 4, I have afforded myself the opportunity to go deeper, especially after saving so much coin. We are heading into a tough contest, and we are going to need all the slots we can muster. This is a full-field by North American standards, and that means that 14 … count ‘em … 14 are entered in this Grade 3.

Probably the biggest news is the presence of Kenny McPeek’s Crazy Beautiful #3. After competing at some of the highest levels in the Division, her conditioner is switching her over to the grass. That is an intriguing move, and tells us that her barn is hoping to get one more race in, of the graded variety, before the end of the season. I am not much of a fan of Phoenix Thoroughbred, but I am of McPeek. Maybe Brian Hernandez can guide her to victory?

I'm pretty high on Roger Attfield’s Lady Speightspeare #11, above all the others. I was hoping that her veteran trainer would find a place for her to run after she was scratched following a gate incident right before the running of the QE2 Cup a couple of weeks ago. Thank goodness she was fine … undefeated, her regular jockey Emma-Jayne Wilson hops a flight once again to come and take the mount. Attfield has history of coming to Keeneland with some quality runners, and this filly by Speightstown is no exception. At this point, I think if you could get 10/1 on this homebred, that would be a significant overlay. It probably will not happen … however, let’s dare to dream.

I am hoping Attfield’s charge makes it home all on the frontend come Friday, but just in case, I am going to hit the “ALL” button just for insurance purposes. If we get an even bigger price that hits in the end … all the better!

To end this P4 sequence, we find ourselves trying to solve a puzzle that stretches along the Keeneland backstretch. A 7F affair for MCs is never easy … do you want a runner with just a few races under their saddles, or one that is steeped in form/history? I can go deep in this spot, but if I want to keep the cost of the ticket below $50, I am going to have to make some tough calls.

When it comes to a top pick, I am swayed by the back class of Rusty Arnold’s Biko #4. This gelding by Orb has had a tough time of it in higher company, but should enjoy some relief in this spot. Sometimes that is just what a runner needs when everything seems to be going south. With Brian Hernandez in the saddle, he could be just the catalyst to turn things around for this 3-yr-old. At odds of 5/1, that seems like a square price.

Others in this spot that entice include, Robertino Diodoro’s Tenor #1, James Kelly’s Contractor Bill #5, Keith Desormeaux’s Doctrinaire #7, and finally Saffie Joseph’s Brother Brad #8. Each of these has a shot to make an impact in this spot, and the trainer/jockey combinations seem pretty sound. What a way to round out the ticket … nothing like strong opinions early on in the game!