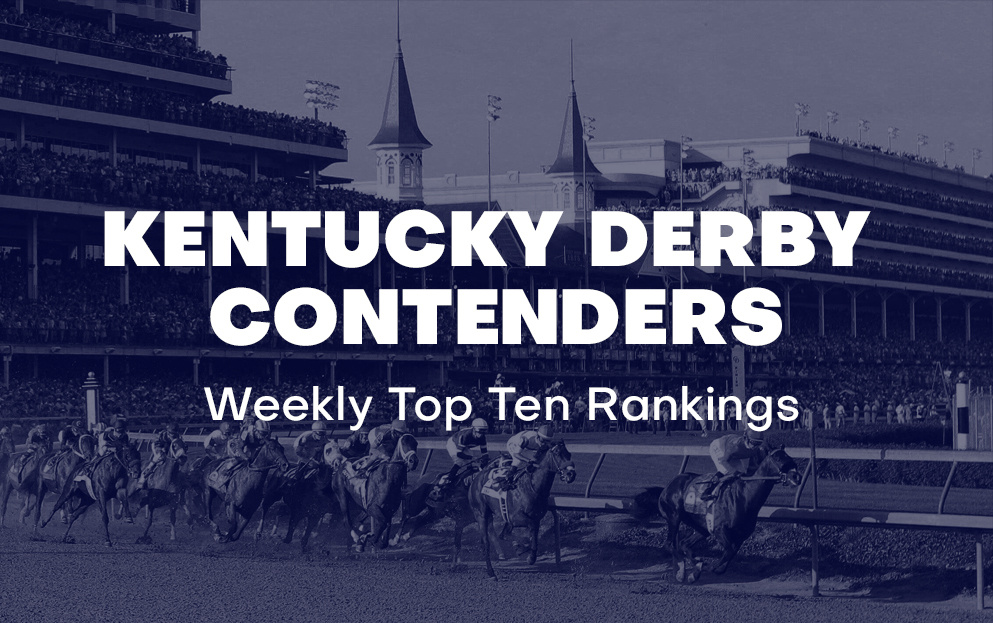 I'm still in mourning that Life is Good won't be in the starting gate at Churchill Downs but after an interesting Saturday on the Road to the Kentucky Derby - two horses have become serious players on my top ten rankings. Highly Motivated looked great in going stride-for-stride with Essential Quality and Rock Your World was more than strong in winning the Santa Anita Derby.

Our turf-man and editor seem to finally be aligned on some of the top Kentucky Derby contender but our in-house handicapper still clearly not that high on Essential Quality.

It is the turn of our editor this week to write-up his top ten list...

#1 Essential Quality: Winning the Southwest Stakes in the slop was enough for me to elevate him to second spot three weeks ago - i.e. the last time it was my turn to write-up my rankings. He's still not as good a horse as Life is Good but with the Baffert favorite off the Derby trail - EQ goes into top spot. A good win on Saturday in the Blue Grass solidifies his position but I was hugely impressed with Highly Motivated. I'm not convinced he's your sure-fire betting favorite for the Derby but the odds will say different.

#2 Concert Tour: All eyes point towards the Arkansas Derby for Concert Tour. Seemingly he arrived on the Kentucky Derby trail from nowhere following a win at the Grade II San Vicente. Following up that performance with a very fine run at Oaklawn in the Rebel vaulted him up my rankings. Unlikely to overtake EQ even with a win at the Arkansas Derby but well deserving a second spot.

#3 Hot Rod Charlie: Three weeks ago I wrote the following:

'On Saturday he will race over at Fair Grounds in the Louisiana Derby and for me he's the biggest challenger to Mandaloun. Loved his closing speed in the Robert B. Lewis, which was his first run as a three-year-old. I would not be shocked at all if he ships across to New Orleans and comes away as the winner. Lightly raced but highly regarded. Next up the Louisiana Derby'

Yeah. Fair to say I feel pretty good about that write-up. Surprisingly he drifted in the final Futures Pool - going from 6-1 to 12-1. Real gamer of a horse who has no questions about his stamina. Real Derby contender here.

#4 Highly Motivated:  The Into Mischief colt went stride for stride with Essential Quality at the Blue Grass. That was more than enough for me to move him from unranked to number four this week. More than enough. I loved his run at the Nyquist Stakes back on Breeders' Cup Friday last year and knew he had plenty of speed. Stamina though was a big question mark. Not anymore. He closed at 25-1 in the final Derby Futures Pool and if you were to get anything near those odds in the Derby Pool on May 1 - go for it.

#5 Known Agenda:  The Florida Derby 1-2-3 all feature in my top ten this week. Top of the tree is obviously the winner that day - Known Agenda. Sometimes a horse can just go away and get better and this is what I saw in the Curlin colt. Before that race he wasn't on my radar but with Life is Good out of the race - I think there is a sizeable step-down in quality and several horses could all be in the mix. Not one I would look to bet heavily but one I will be watching to see how he breezes.

#6 Medina Spirit:  He's up at two for Sean and down at nine for J.N. - I've plumped for six. Liked this horse ever since he ran Life is Good close in the Sham. No-one has gotten that close to what I see as the best three-year-old in the country so I'm always going to have him in the mix. He ran well in the Santa Anita Derby but Rock Your World was just better on the day. Medina's stock is clearly going down but never rule out a Baffert trained horse with stamina and bags of grit and determination.

#7 Rock Your World: I was dismissive of his chances of winning the Santa Anita Derby. I thought the switch from turf to dirt against such a good field would be too much to handle. As smart as I look for my Hot Rod Charlie thoughts - I look just as dumb for this one. An absolutely stunning performance with a 100 Beyer speed figure. Only Life is Good as topped that as a three-year-old and he's out of the Derby. Huge wildcard who could provide plenty of intrigue for bettors.

#8 Soup and Sandwich: Neither of my colleagues have this Into Mischief colt ranked but he was the horse I was most interested in watching going into the Florida Derby and he didn't disappoint. He finished second to grab 40 qualification points and with it - the right to start in the Run for the Roses. There is just something about him that makes me feel he has what it takes to hit the board in the big one.

#9 Greatest Honour:  The Tapit colt won two of the three Gulfstream Preps for the Derby and finished third in the other. Whilst that third was not ideal - it seems harsh to completely remove him from Derby consideration. One bad trip doesn't disqualify a horse from contention. In fact that poor run may open up the price down the road.

#10 Rombauer: When you get down to number ten in this list - you aren't really writing up a horse you think can win the Derby - more one that can hit the board and that it where I'm at with Rombauer. Finishing five-and-a-half lengths behind Highly Motivated and another quarter of a length behind Essential Quality in the Blue Grass is nothing to sniff at. Potentially skipping the Derby to aim for the Preakness. The Twirling Candy colt currently sits in 21st place in the points table so would need a few passes to make the starting gate.