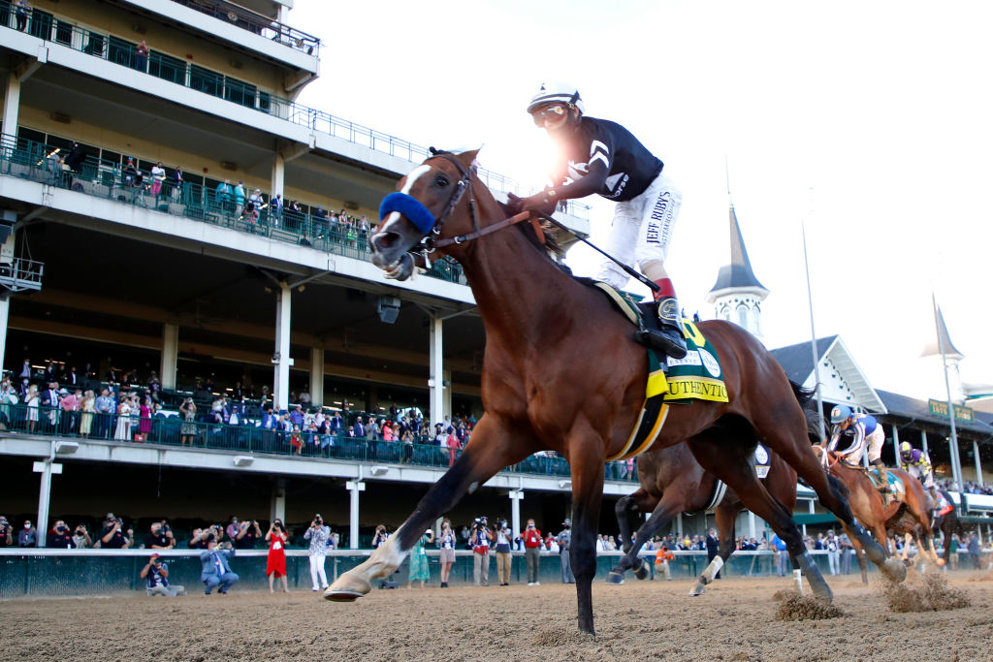 With the final Prep Race for the 2021 Road to the Kentucky Derby in the books, our minds moved towards whether any of this years contenders could run a super fast race. Life is Good seemed to be the real deal but with him missing the race due to injury - it seems unlikely the fastest time will be challenged.

Our in-house handicapper looks back on the 1973 race where Secretariat posted the only ever sub two-minute time for the race - a time that still holds up - nearly 50 years after it was chalked up.

Secretariat’s victory in the 1973 Kentucky Derby was no surprise; rather, it was a coronation. The big chestnut was America’s reigning Horse of the Year — one of only two 2-year-olds to have been given that honor in the history of the Eclipse Awards — and he picked up right where he left off to begin his sophomore campaign, with easy wins in the Bay Shore and Gotham to start the year, though he faltered in his final prep for the Derby, finishing third in the Wood Memorial. The blemish left the door cracked open for skeptics to question his stamina, or speculate that he was perhaps unsound heading into the Derby. Secretariat’s answer was a resounding one.

When the gates opened for the 99th Kentucky Derby, Secretariat broke slowest of all and angled over to the rail under Ron Turcotte. The pair made a decisive move down the backstretch and around the far turn to reach contention, and they continued their sustained rally into the stretch, where they powered past their old rival Sham, who finished ahead of Secretariat in the Wood Memorial, to score by 2 ½ lengths. It was another eight lengths back to third-place finisher Our Native.

The margin of victory wasn’t jaw-dropping, but there were a few remarkable things about Secretariat’s Derby. For starters, it was the fastest recorded time in the race’s history, as Secretariat became the first horse ever to complete the race in under two minutes (Sham also eclipsed the two-minute mark), and it would be another 28 years until Monarchos also earned a sub-two minute final time. But perhaps more amazing were the internal splits for the race. For each successive quarter-mile, Secretariat posted a faster time, completing his final quarter in a blistering 23 seconds flat.

As is now well known, Secretariat’s dominant performance proved to be no fluke. He eviscerated his competition in the Preakness in record time and his Triple Crown bid culminated in an iconic, 31-length triumph in the Belmont, for which he also set a track record. Incredibly, all three records still stand.

You can watch the stunning display below.

Up to $500 Preakness cash back bonus

Authentic's surprise victory in 2020 came with the fastest time since 2001 as he upset odds-on favorite Tiz the Law. Once more our in-house handicapper takes a look back at the race...

It wasn’t a storybook ending for the Tiz the Law camp, but the 2020 Kentucky Derby was a fitting encapsulation of the year. Somehow, despite Bob Baffert’s main Derby prospects Charlatan and Nadal missing the race due to injury, and another, Thousand Words, being scratched in the paddock prior to the race after rearing up and breaking the arm of his top assistant Jimmy Barnes, the white-haired wizard prevailed again in the ‘Run for the Roses’ with Authentic.

That makes six victories in the Derby for Baffert, who may have pulled off his most impressive training feat yet in the 2020 edition. Just a month and a half after Authentic was life and death to hold off Ny Traffic in the G1 Haskell at a mile and an eighth, he set a much faster pace going a mile and a quarter and was able to stave off overwhelming favorite and brilliant 3-year-old Tiz the Law to win by 1 ¼ lengths. It was nothing short of miraculous.

The question now becomes is this going to be the new normal for Authentic, or was there something about the particular conditions of the Derby this year that propelled him to victory. While he had previously been a very productive racehorse and certainly belonged in the Derby starting gate, none of his prior races hinted that he was capable of this level of performance. As much as I want to ascribe his career-best effort to some bias or shrug it off as an aberration, I just don’t think that was the case. Authentic ran very hard to make the lead, took a serious challenge from Tiz the Law, who seemed to deliver something at least approximating his best race, and completely shrugged it off. I won’t be rushing to bet him in the Preakness, but my opinion of him has definitely changed and I fully believe he was a deserving winner of this race.

As for Tiz the Law, it does feel like he regressed off a smashing win in the G1 Travers, but he had no excuse to not run by Authentic in the stretch and was simply second-best on the day. It’ll be interesting to see if he shows up in the Preakness as there seems to be a schism between his trainer and owner concerning his next assignment, but if he does he should be taken very seriously again. While Authentic ran the better race in the Derby, there’s no guarantee he’ll be able to make the lead again in the Preakness, which would completely change the complexion of the race. It was a disappointing result, but take nothing away from Tiz the Law as he ran a courageous race in defeat.

Authentic and Tiz the Law asserted their class, but the horse I’m most interested in out of the 146th Derby is Honor A. P. He was my narrow second choice behind Tiz the Law, and I think it’s arguable that he ran the best race out of anyone. He got absolutely clobbered coming out of the gate and was left near the back of a strung out field, which immediately put him in a near-impossible position as he’d never been more than three lengths behind the leader in his route races. From there, Honor A. P. proceeded to go very wide around both turns and was really the only one making up ground in the stretch. This combination of ground loss and a disastrous start suggest that he’s many lengths better than his finish would indicate, and with a better trip I believe he would have won. Wherever he shows up next he should offer plenty of value, regardless of the race.

The other big story coming out of the Derby is longshot third-place finisher Mr. Big News. Perhaps even more than Authentic, Mr. Big News improved by leaps and bounds in this race. He did get a good trip sitting in midpack behind a swift pace, however he had to go wide around the far turn and came with a strong, sustained rally to finish a clear third. He wasn’t getting to Authentic or Tiz the Law, but this is the kind of performance that’ll make you take notice as he’s really starting to blossom in the second half of the year. If he continues to improve there could be big things in store for him as 2020 rolls along and/or next year.

Max Player ran his race making a belated run to get fifth, but I don’t think he’s on the level of the four that finished ahead of him. The horses that filled out the superfecta were the best horses in the race.

The 2020 Kentucky Derby is embedded below.

Will any of the 2021 horses running in the Kentucky Derby approach the top of this list? I doubt it but no-one expected a fast time from Authentic a year ago. Check out our dedicated Derby page below for all the latest news and previews surrounding the race...

Belmont Park Picks & Analysis for May 15
By Sean Morris

Pimlico Picks for Saturday, May 15 as HorseRacing.net's in-house handicapper handicaps the card for Saturday's…

Sir Barton Stakes Picks as HorseRacing.net preview the race and offer up their handicapping and predictions for…

Chick Lang Stakes Picks as HorseRacing.net preview the race and offer up their handicapping and predictions for…

Gallorette Stakes Picks as HorseRacing.net preview the race and offer up their handicapping and predictions for…

James W. Murphy Stakes Picks as HorseRacing.net preview the race and offer up their handicapping and predictions…

Skipat Stakes Picks as HorseRacing.net preview the race and offer up their handicapping and predictions for the…

Jim McKay Turf Sprint Stakes Picks as HorseRacing.net preview the race and offer up their handicapping and predictions…

Maryland Sprint Stakes Picks as HorseRacing.net preview the race and offer up their handicapping and predictions…

Dinner Party Stakes Picks as HorseRacing.net preview the race and offer up their handicapping and predictions…

Place your first single bet on any race and get up to $300 back as wagering credit if your horse doesn’t win. T&Cs apply,21+
get offer
Up to $200 Preakness sign-up bonus
New Customers Only,21+. T&Cs apply
Up to $200 Preakness sign-up bonus
New Customers Only,T&Cs apply,21 +
Up to $500 Preakness cash back bonus
T&Cs apply,21+,State Restrictions,using code 500Bonus get 10% for every $ waged in first 30 days
Advert Disclaimer
Horseracing.net is a free online resource which endeavour to provide helpful and useful content and odds comparison to its visitors. Please be advised that Horseracing.net accepts affiliate commission from the companies appearing on the site, and agreed commission levels impact the location and order in which the companies (and/or their products) are presented on the website. Any ratings that appear on this site is determined by our subjective opinion of the brand but also based on market share and reputation, each brand's conversion rates, commission paid to us and general consumer interest. Company listings on this page don't imply our endorsement. We do not feature all providers on the market. Except as expressly set forth in our terms and conditions, all statements and warranties regarding the information presented on this page are disclaimed. The information, including odds, which appear on this site is subject to change at any time.

New Customers Only,21+. T&Cs apply
get offer
Get a $300 Preakness Risk Free wager
Place your first single bet on any race and get up to $300 back as wagering credit if your horse doesn’t win. T&Cs apply,21+
get offer